This Day in Washington Baseball History...Bob Short Day, or How A 7-5 Senators' Lead Became A 9-0 Yankees' Win...

Share All sharing options for: This Day in Washington Baseball History...Bob Short Day, or How A 7-5 Senators' Lead Became A 9-0 Yankees' Win...

(The Continuing Attempt To Educate A Montreal Fan About DC Baseball History...)

For all the problems the city of Montreal had with the Expos and their owners, it never came to this... 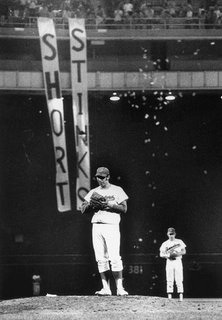 September 30, 1971. The Washington Senators are playing the New York Yankees in what will be their last game in DC's RFK Stadium before owner Bob Short makes good on his threats to relocate the team to Texas, where Arlington, Texas Mayor Tom Vandergriff and his brand new ballpark are waiting, with a deal that includes, according to an uncredited Time magazine story entitled, "Senators on the move":

The deal had been approved ten days earlier at a meeting of America League owners on September 20, 1971, but apparently the news only trickled down to the team and its fans in the days leading up to the final game. Washington Senators' great Frank Howard is quoted in an article by New York Times' writer Richard Sandomir entitled, "Yankees Last Trip To R.F.K Ended In Fan Rampage", which recounts the events of the evening at RFK and quotes Mr. Howard explaining:

"'I didn't find out we were leaving until two nights before that game,' said Frank Howard, the 6-foot-7 slugger, who had his best years in Washington. Several younger players told him, "Frank, we're leaving town," he recalled. 'And I said, "You're kidding me." But looking back, that plan was in action.'"

With the enormous "Short Stinks" banner and several other colorful variations on the theme unfurled from the outfield stands earlier that evening accurately conveying the mood of the assembled crowd, Frank Howard gave the fans one last reason to cheer as their beloved "Hondo" hit a HR off Yankees' lefty Mike Kekich to start a four-run Senators' sixth which brought DC back from 5-1 down to tie the game at 5-5 before Washington would take a two-run lead in the home half of the eigth on an RBI single and a sac fly from Tommy McCraw and Elliot Maddox, respectively, to set up a Senators' win in the final game of the franchise's history in DC. The DC Faithful were not about to let that happen...

As described by the late, legendary Washington Post columnist Shirley Povich in the authoritative account of the evening's activities entitled, "The Senators' Final Game", in which Mr. Povich writes:

"...in the eighth they went in front, 7-5, but now, oddly, the temper of the crowd was changing. As if in sudden awareness that the end of major-league baseball in Washington was only one inning way, the mood hardened. "We want Bob Short!" was the cry that picked up in loud and angry chorus, and it was the baying-fury sound of a lynch mob.

Then a swarm of young kids, squirts who wouldn't know what it had meant to have a big-league team all these years, or what it would mean to lose one, flooded onto the field from all points of the stands. A public address announcement warned that the home team could forfeit the game unless the field was cleared, and pretty soon the game resumed."

But it didn't last long...A fan charged out of the stands and took first base...followed by a crowd of disgruntled DC fans who interrupted the game knowing full well what the result woud be, a 9-0 NY win was declared and the final game in the Senators' history in the nation's capital came to an ignominious end. Short moved the team to Texas where the Rangers were born, and Washington would have to wait 34 years before baseball would return... 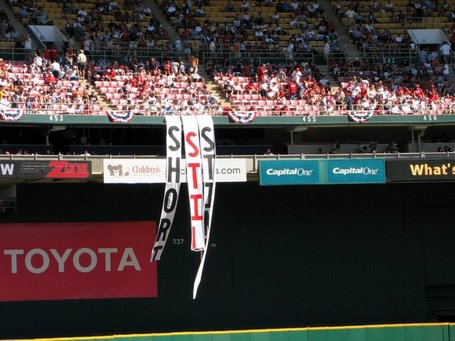