(The Continuing Attempt To Educate A Montreal Fan About DC Baseball History...)

On October 19th, 1901, Big Ed Delahanty, who two years earlier had won a National League batting title with the Philadelphia Phillies when he hit for a .410 AVG in 146 games with 55 doubles and 147 RBI's, joined 4 other players in jumping from the National League to the American League when he was given $15,000* dollars to become a Washington Senator in their second season as a major league team. Delahanty hit .376 that first year, and according to some (including Major League Baseball) this earned the then-34-year-old slugger his second batting title, which would make him the only player in baseball history to win a batting title in both leagues, but if you look at Delahanty's stats on baseball-reference.com, you'll notice he's credited with just one batting title, earned with Philadelphia in 1899, and Nap Lajoie is awarded the crown in 1902...

...Apparently, there's a dispute here between the MLB Hall of Fame stats and those collected by Baseball-reference.com, and some question about eligibility requirements, here's how it's explained on Wikipedia's batting title page:

"...The 1902 AL batting championship was awarded to Ed Delahanty at the time, and MLB still credits Delahanty as the champion over Lajoie. The MLB Hall of Fame lists Lajoie's 1902 stats as being 129 H / 352 AB / .368 BA, but Baseball-reference.com lists them as 133 H / 352 AB / .378 BA, which would place Lajoie above Delahanty. However, Lajoie had only 371 plate appearances to Delahanty's 535 or 536 (depending on which source you use), so there is the issue of eligibility — Lajoie's 371 plate appearances falls well below the 424 that would be required under the current 3.1 plate appearances per team game standard of eligibility, and adding 53 hitless at bats would drop his average to .314. This discrepancy is somewhat significant, as Delahanty is regarded as the only player to win a batting title in both leagues (.410, 1899 Phillies), as of the end of the 2008 season."

If you look at Nap Lajoie's Hall of Fame plaque, you'll note that he has three batting titles listed in the last line, 1901, '03 and '04, while Ed Delahanty's notes his having won the batting title in both leagues: 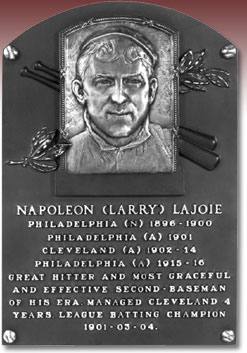 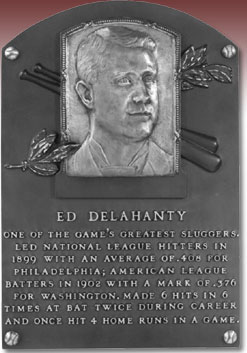 ...you'll see that the 1902 AL Batting Title goes to Lajoie. SI.com, however, has Lajoie hitting .366 in 1902, and their stats are according to MLB. Is there any chance that the websites will change history? How does anyone at Baseball-reference reconcile or deal with the eligibility requirements? That isn't really explained in the Wikipedia footnote provided above...

(ed. note - "If you find yourself wondering why you remember Ed Delahanty's name, it might be because you have heard of him before, in fact, I wrote about Mr. Delhanty's sad fate earlier this year, in an earlier "This Day In History" column which recounted Delahanty's demise..."):

"You see, Big Ed...well, he went and got drunk and got himself kicked off the team train which was returning from Detroit through Buffalo, NY...and Big Ed, well he fell off the International Bridge, which spans the Niagara River, which, you guessed it, leads to Niagara Falls. Big Ed Delahanty, one of five Delahanty brothers to make it to the major leagues, who had a career .346 AVG, putting up a 162-Game AVG of 46 doubles, 16 triples, 9 HR's and 129 RBI's according to baseball-reference.com, was swept over the falls and at some point along the way killed....Delahanty was 35 when he died in July of 1903. 42 years later, Big Ed Delahanty was posthumously elected to the Hall of Fame by the Veteran's Committee."

That's what happens when you start looking into the shady history of Major League baseball, especially in Washington, DC.

(ed. note - " * = The only source for Delahanty's $15,000 dollar deal is an oddly html-filled document entitled, "Notes from the Shadows of Cooperstown" by Two-Finger Carney which contains the line:

"None other than Big Ed Delahanty, who had joined the AL Washington team after thirteen seasons with the Phils, in that .400 average outfield. The $15,000 he received to join the Senators in 1902 made him the highest paid player of his time..."

Anyone who wants to sort this all out for me, feel free...")