• In 2.2 IP this afternoon against the Peoria Javelinas, the Washington Nationals' '09 No. 1 overall pick pitcher Stephen Strasburg allowed almost as many HR's (3) as he surrendered in 109.0 IP in his junior year at San Diego State University (4). The 8 runs (7 ER) the Nationals' and Phoenix Desert Dogs' 21-year-old right-hander has allowed in his first two Arizona Fall League starts, are nearly half as many as the 17 runs (16 ER) Strasburg allowed in 15 starts in his entire '09 collegiate campaign...

• Strasburg struck out two of the first three batters he faced in the first this afternoon, giving up a one-out single sandwiched by a backwards and a swinging K, but then with two down, Strasburg left a first-pitch fastball (that was fouled off) up over the middle of the plate before trying to jam a 96 mph heater inside on 24-year-old Dodgers' infielder Russ Mitchell, who sent a two-run blast out to left for an early 2-0 Javelinas' lead. Strasburg started the next batter, White Sox' infielder C.J. Retherford with a high inside curve which he followed up with two straight fastballs, one called a ball high and outside at 96 mph, the other a 90 mph strike on the low inside corner that was fouled off by Retherford, who then waited for a 1-2 curve to drop into the zone and lifted it to left for a solo HR and a 3-0 Peoria lead against Strasburg and the D-Dogs...

• A Portrait of a Hanging Curve.

• Here's the hanging curve to Retherford that went out for a solo shot as captured by MLB.com's GameDay: 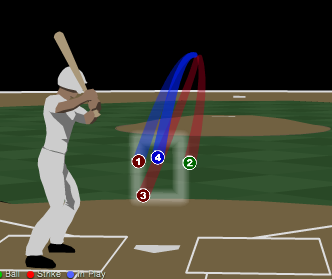 • After a leadoff single by Brewers' backstop Jonathan Lucroy to start the second, a wild pitch and a passed ball that got by DC catcher Sean Rooney moved the runner to third before Strasburg struck out '09 No. 2 overall pick Dustin Ackley with a 2-0 four-seamer at 96, a 2-1 two-seamer at 90 and a 2-2 curve that broke some 11'' (according to MLB.com's Pitch F/X software) to get the Mariners' top pick swinging at three-straight pitches. The next batter, Seattle shortstop prospect Juan Diaz hit a grounder to second to score Lucroy for a 4-0 Javelinas' lead.

• A leadoff single followed by a walk, a K and a one-out single by C.J. Retherford in the third and the bases are loaded for Tigers' outfielder Casper Wells, who takes another high curve for a ride, hitting a grand slam, for an 8-0 Javelinas' lead and a learning experience for the Nationals' young starter.

"Strasburg had bad luck, which he actually made on his own. He hung two curveballs, and paid the price. But not every hung curve is hit, and it remains to be seen if he continues to do that with any regularity. The ground balls that turned into hits were probably more or less out of his hands (relatively speaking). The fastball command was clearly a problem."

• AFL Notes: Nationals' right-handed pitching prospect Josh Wilkie replaced Strasburg and gave up a run on 3 hits in 2.1 IP. DC's shortstop of the future Danny Espinosa injured his ankle sliding into second according to Washington Times' writer Mark Zuckerman's article entitled, "Strasburg rocked, Espinosa injured". At least Chris Marrero had a sick day at the plate, smacking his third double and hitting his second HR of the fall, to finish the game 3 for 5 with 2 runs scored, 2 RBI's and a .435 AVG after 6 games and 23 AFL at bats.