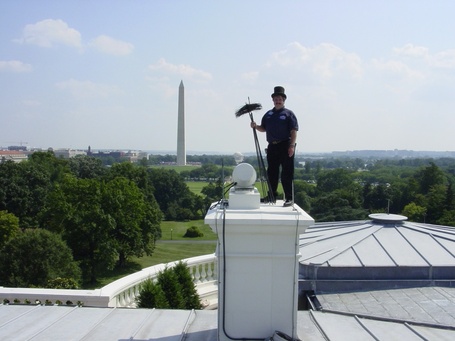 Game 162 of 2009 took 4 hours, 18 minutes and 15 innings to finish and when it was over the Washington Nationals had completed a four-game sweep of the Atlanta Braves for their seventh-straight win (and second-straight sweep) to end a 2009 season they started 0-7 before recording their first win...And, yes, that is the first time that's ever happened...DC starter J.D. Martin allows just one-run on 6 hits in 6.0 IP, giving up Nate McLouth's solo HR to leadoff the sixth and put Atlanta ahead 1-0. Braves' righty Tim Hudson gives up just 4 hits through 6.0 IP, but three-straight singles from Alberto Gonzalez, Jorge Padilla and pinch hitter Adam Dunn bring in the tying run in the seventh and it remains tied through fourteen before Elijah Dukes takes a one-out walk and Wil Nieves and Alberto Gonzalez hit back to back two-out singles to score Dukes for the winning run...

• For The Completist, Full (and I mean FULL) Game Report After The JUMP...

• Dunn Doesn't Reach 40...Adam Dunn hit his 38th HR of 2009 on September 22nd against Los Angeles, leaving the Nationals' big left-handed hitting slugger with 10 games to hit the 39th and 40th HR's of 2009. Had he reached 40 HR's for the sixth-straight season, Dunn would've been one of only four players in MLB history (along with Alex Rodriguez, Sammy Sosa and Babe Ruth) to hit 40+ HR's in six-straight seasons, leaving him just one behind Ruth's industry standard of seven-straight 40 HR seasons. Dunn, however, managed just 3 hits in his next 36 at bats (2 of them doubles, but no HR's) heading into today's game, and when he wasn't in the starting lineup, the DC Faithful knew it was over. Having failed to reach 40 HR's for the first time in six seasons didn't seem to upset Dunn too much. The Big Walky, Big Opposite Field, The Big First Baseman, singled in one of Washington's two runs in a pinch hit appearance this afternoon to finish the season with a .267 AVG, 29 doubles, 38 HR's and 105 RBI's.

• Strasburg To Pitch Tomorrow...I know it's a cliche to say that the 2010 season starts the second the final out of 2009 is recorded, but with MLB.com's Bill Ladson writing this afternoon that '09 #1 overall pick, Stephen Strasburg would be making his first appearance as a National tomorrow afternoon in an instructional league game against Detroit, it is actually accurate. Instructional League, The Arizona Fall League, the Dominican Winter League, baseball never really stops, and neither do we...see you...tomorrow.

Justin Maxwell vs Tim Hudson to start the last game of the season, and a brutal two-strike bender gets J-Max swinging for the first out of the day. Ian Desmond takes a 2-2 fastball on the low outside corner for a called strike three. Pete Orr smokes a single through second for a two-out hit in front of Elijah Dukes. Dukes rolls the third out to first to end the opening frame...Jorge Padilla bounces off the wall as he closes the glove on a fly ball out from Nate McLouth. Pete Orr dives toward the third base line but can’t get to Omar Infante’s line drive double. Martin Prado pops out to second. Garrett Anderson grounds out to first, inning over.

Mike Morse grounds weakly to third to start the second. Josh Bard likes the first pitch he sees and he grounds out to second. Alberto Gonzalez flies to right to end the Nationals’ half...Adam LaRoche flies out to right field. Yunel Escobar gives Dukes more work. Kelly Johnson grounds to Morse at first to end the second.

Jorge Padilla swings wildly over a full-count sinker. J.D. Martin stares strike three all the way in. Justin Maxwell walks with two down. Ian Desmond hits a high chopper that dies in the grass halfway to third, refusing to go foul. Pete Orr grounds to LaRoche at first and it’s 0-0 in the third...Clint Sammons skies one to right for Elijah Dukes to get under. Tim Hudson lines a one-out single to center and the oh-oh-oh-ing starts in Atlanta. Nate McLouth takes a 2-2 slider on the outside edge. Omar Infante flies out to left.

Elijah Dukes takes a low full-count slider but Tim Hudson gets the call. Mike Morse flies out to right. Josh Bard slips a hard-hit grounder by first and hustles his way to second. Alberto Gonzalez grounds out to end the Nationals’ fourth...Martin Prado flies out to Elijah Dukes in right. Garrett Anderson pops out over short, and J.D. Martin gets a fly ball from Adam LaRoche to end the fourth scoreless.

Jorge Padilla hits a fly ball out to Nate McLouth in center field for Atlanta. J.D. Martin can’t handle what Hudson’s throwing, but Justin Maxwell just takes and takes and walks, then tries to take more but gets caught trying to steal second, no score after four and a half...Yunel Escobar takes strike three and has few choice bi-lingual words for the Ump. Kelly Johnson singles through second with one down. Clint Sammons flies out to Justin Maxwell in center.

Ian Desmond grounds out to third. Pete Orr pops out to third. Elijah Dukes hits a two-out single to left field, but Mike Morse’s infield pop ends the top of the sixth...J.D. Martin gives up a long fly ball to right on an 0-1 change to Nate McLouth, who puts it over the wall for a 1-0 lead. Jorge Padilla sprints to the corner to catch the first out off of Omar Infante’s bat. Martin Prado drives a single by a lunging Ian Desmond at second. Garrett Anderson lines out to Jorge Padilla in left for out No. 2. Adam LaRoche lines to left field, Jorge Padilla comes up throwing and nails Prado trying for third.

Josh Bard leads off the seventh against Tim Hudson. Bard grounds out to second. Alberto Gonzalez singles to center and Jorge Padilla follows with a second-straight single and Adam Dunn gets a PH chance. Dunn lines a hanging bender to right to score Gonzalez from second for a 1-1 tie!!! Justin Maxwell K’s/fails swinging through an 0-2 fastball upstairs and inside. Ian Desmond grounds out to first to strand two. 1-1 in the seventh...Yunel Escobar sends the first pitch from Tyler Clippard soaring into center field for Justin Maxwell. Kelly Johnson K’s swinging through a two-strike change. Clint Sammons K’s looking at a fastball inside.

Pete Orr grounds out to second to start the Nationals’ eighth. Braves’ reliever Peter Moylan walks Elijah Dukes with one down. Mike Morse grounds to Yunel Escobar to Kelly Johnson to Adam LaRoche at first, double play...Chipper Jones guides a high outside heater through short for a single. Nate McLouth gets a sac bunt down and gets tagged out by Clippard as Chipper moves up. Pete Orr looks Chipper back to second and throws out Omar Infante on a weak grounder. Martin Prado flies to deep center, but Justin Maxwell gets there, no problem.

Josh Bard pops up a 2-1 pitch from Rafael Soriano. Alberto Gonzalez takes a one-out walk in front of pinch hitter Josh Willingham. The Hammer K’s swinging through a high heater. Cristian Guzman grounds out to end the Nationals’ ninth...Ron Villone gets a groundout to third from Garrett Anderson. Adam LaRoche K’s swinging through a 2-2 bender upstairs. Yunel Escobar keeps hope alive for Atlanta with a two-out single through second. Kelly Johnson hits a broken bat blooper to second and the last game will take more than nine innings to decide.

Kris Medlen gets Justin Maxwell swinging to start the tenth. Ian Desmond rrrrips a grounder by third base and into the corner for a one-out double to left. Pete Orr pops out to short center. Elijah Dukes grounds out to second to end the top of the tenth...Ron Villone’s back in the tenth against Clint Sammons, who flies out to left. Pinch hitter Greg Norton takes a one-out walk. Nate McLouth K’s swinging through a looping bender over the middle. Jason Bergmann on for Villone against Omar Infante. Infante battles, but K’s swinging through a full-count slider!!

Kenshin Kawakami vs Mike Morse in the eleventh. Morse sends a dribbler by Adam LaRoche at first and Omar Infante misplays it to give Morse second. Wil Nieves tries the sac bunt and hits it too hard, Morse cut down at third. Alberto Gonzalez grounds to Yunel Escobar to Kelly Johnson to Adam LaRoche, double play...Saul "Sa-ool" Rivera pops up Martin Prado. Reid Garecki K’s swinging through a high fastball. Adam LaRoche grounds to first to end the eleventh.

Josh Willingham singles to left and takes second on a sac bunt from Saul Rivera. Justin Maxwell vs Kenshin Kawakami. Maxwell can’t hold up and he K’s swinging at a low fastball for the second out. Ian Desmond up when a wild pitch from Kawakami gets by Clint Sammons. Hammer to third. Ian Desmond lines to left and it’s...caught, Omar Infante makes a shoestring catch to rob Desmond...Saul Rivera gets a weak grounder from Yunel Escobar for the first out. Kelly Johnson rips one to first, Mike Morse knocks it down and tosses to Rivera covering. Clint Sammons shatters his bat but singles with two down. Pinch hitter Brian McCann grounds back to the mound and it’s on to the thirteenth.

Eric O’Flaherty takes over on the mound for Atlanta in the thirteenth. Pete Orr grounds out to second. Elijah Dukes flies out to center. Mike Morse K’s swinging...Nate McLouth flies out to the track in center field for Justin Maxwell. Omar Infante lines a double on one hop and over the wall in center with one down. Saul Rivera walks Martin Prado in front of Brooks Conrad, who flies out harmlessly to center. Adam LaRoche grounds out to first, and it’s on to the fourteenth...

Manny Acosta takes over against Wil Nieves, who walks to start the frame. Alberto Gonzalez flies out unproductively to center field. Josh Willingham can’t hold up on a low two-strike heater. Pinch hitter Ryan Zimmerman drives a double to center, McLouth cuts it off and Nieves stops at second. Justin Maxwell walks to load the bases for Ian Desmond...Logan Kensing’s on for DC. Yunel Escobar starts the Braves’ half with a line drive single to left. Kelly Johnson grounds to second, Alberto Gonzalez to Ian Desmond to Mike Morse, double play. Clint Sammons grounds back to the mound.

Pete Orr K’s looking to start the fifteenth. Boone Logan, the Braves’ right-hander, walks Elijah Dukes with one down. Mike Morse flies out unproductively to left. Wil Nieves singles to short right to move Dukes up. Alberto Gonzalez lines an RBI single to the left-center gap!! Dukes scores, 2-1 Nationals!!! Josh Willingham K’s looking to end the top of the frame...Logan Kensing vs Javier Vazquez. Vazquez grounds one off Logan Kensing’s pitching hand, Ian Desmond picks it up and throws out the pinch hitting pitcher. Nate McLouth K’s swinging over a sinker. Omar Infante singles up the middle with two down. Martin Prado drills an 0-2 pitch to left center, second and third with two down. Brooks Conrad K’s trying to check his swing and it’s over. Nationals win, 2-1 final.