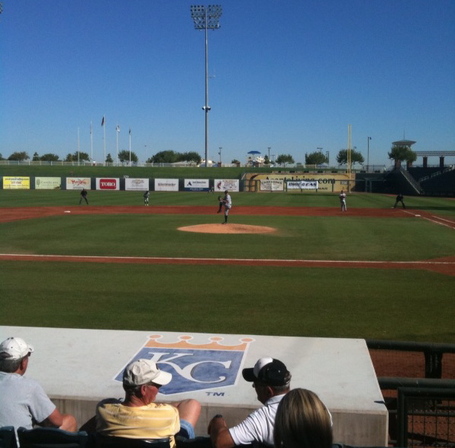 At the end of a long strip mall, palm tree and box car lined stretch of Arizona asphalt, tucked away behind shopping centers, restaurants and car washes galore is the only lush green grass to be seen for miles around, on the field at Surprise Stadium in Surprise, Arizona. Stephen Strasburg made his fourth AFL start there Monday afternoon in front of 400-500 fans, scouts and even one MLB team President, or as one local fan described it to me, "More people than I've ever seen at one of these games." "Why are there so many people here?" a nearby fan asked as he overheard our conversation, "That's why," the local gentlemen said, pointing to the triple-digit speed readings flashing on the scoreboard, "People still get excited about seeing someone throw over 100 mph."

Four of Stephen Strasburg's first 6 pitches hit triple digits, and in the first inning, Strasburg, who was ahead 3-0 before even taking the mound, topped out at 101 mph as he struck out leadoff batter, gave up a one-out single and then got a DP grounder to bring a scoreless first frame to a close. The crowd watched, oohed and aahed as Strasburg delivered one buzzing fastball after another, most of which were in the high '90's with a few dropping as low as 92.

Strasburg's heater hit a hundred twice in the second inning, once for strike three and a swinging K from Mets' IF/OF Nick Evans, who's already played 80 major league games, and again as he walked Rangers' catcher Taylor Teagarden, who has 76 MLB games under his belt. Another swinging K from the Kansas City Royals' top-rated prospect, (according to Baseball America), Mike Moustakas, was followed by a two-out single, and then a weak groundout as Strasburg retired the final batter of his second scoreless frame.

The Nationals' '09 No. 1 overall pick hit 100 just once in the third as he retired the Rafters' batters in order, but all but one of his fastballs came in at 98 or 99, and he remained in the high 90's as he retired three of the four batters he faced in the fourth with only Teagarden's two-out single disrupting Strasburg's flow. A leadoff double in the fifth by Yankees' first base prospect Brandon Laird was the only extra base hit Strasburg allowed, and he might have been held to a long single if Desert Dogs' left fielder Corey Brown hadn't made an ill-advised dive at the liner. Two groundouts later Laird scored the only run Strasburg surrendered, and he was still in the high-90's as his outing came to a close.

After Strasburg, the Nationals' pitching prospects filed out one after another, since, as I mentioned in the opening paragraph, Washington's team President, Stan Kasten, was in attendance to see how the Nationals' prospects were progressing. Brad Wilk...I mean, Josh Wilkie, threw a scoreless sixth, and Jeff Mandel pitched the eighth, surrendering a run on two hits after giving up a leadoff triple that scored on an RBI groundout, and then the Nationals' closer of the future Drew Storen, Washington's second 1st Round pick, pitched a 1-2-3 ninth which saw the former Stanford Cardinal closer dial his fastball up as high as 97 mph and mix in some brutal 83-89 mph benders and sliders as he retired the Rafters in order to end Strasburg's third win.

(ed. note - "I'll be reporting LIVE from Phoenix Municipal Stadium for the next two days, but rather than set up a GameThread, I'll just put the comments in this post since all the Nationals' pitchers threw today and it'll be just the fielders (if they play) in the lineup tomorrow.")