Strange now to think of what could have been had Aaron Crow agreed to sign with the Washington Nationals after they selected the right-hander out of Topeka, Kansas and the University of Missouri with the 9th overall pick in the 2008 MLB First-Year Player Draft. Crow didn’t come with anywhere near the hype that accompanied ‘09 No. 1 overall pick Stephen Strasburg, nor had he earned the distinction of being the top prospect in the draft that year, though he was the second pitcher taken, and was recognized as the best right-hander available in his draft class. It’s pointless to wonder whether or not DC GM Mike Rizzo would have been able to get Crow signed since it was former DC GM Jim Bowden negotiationg with Crow then, and I’m sure most DC fans are more than happy to have right-handed reliever Drew Storen (the comp pick for Crow) in the system instead, but there’s no denying Crow's talent, which was on display this afternoon in an AFL game between Crow's Surprise Rafters and Storen and Strasburg's Phoenix Desert Dogs...

Crow, who went back into the draft, and ended up with the Royals, was the only one of the three pitchers to appear in this afternoon's extra inning affair, but his day ended early after just 3.1 IP in which the soon-to-be 23-year-old right-hander allowed 6 hits, 4 ER and 1 walk while recording 2 K's and throwing 56 pitches, 42 for strikes. Back-to-back singles followed by back-to-back sacs (a sac bunt and a sac fly) resulted in the D-Dogs' first run off Crow in the second, and a misplayed fly ball in center that wasn't ruled an error let Nationals' SS prospect Danny Espinosa on in the third and resulted in Phoenix's second run of the game when a groundout and an RBI single brought Espinosa around. In the fourth, Crow issued a leadoff walk and then gave up a run scoring triple and a sac fly before being removed with the Rafters down 4-2...(ed. note - "No Pitch F/X or radar in the D-Dogs' home, so no way to know how hard Crow was throwing.") (ed. note - "Which of the three pitchers, Crow, Storen or Strasburg do you think will debut in the majors first? Who will end up having the best career?)

Game Notes: Both Nationals' prospects in the lineup today ended up 2 for 6, with Espinosa scoring one run after his ground-rule double (misplayed fly?) in the third. Chris Marrero, who started at first and hit third, had two hard-hit singles, but stranded three.

I heard this first from Jim Bowden's TwitterFeed, (which I believe is from the real Jim Bowden though I'm not sure, but why else would he announce guests on his radio show), where Mr. Bowden wrote this morning that:

"The Los Angeles Dodgers have declined the Nationals permission to talk with Don Mattingly as he does not have interest in the Nats Opening..."

...and anyway the same news was later in the day by Washington Times' writer Mark Zuckerman, who wrote, in an article entitled, "Mattingly out of the running":

"The Nationals are expected to name their manager in the next week, and after Don Mattingly removed himself from consideration, it appears Jim Riggleman has an inside track toward retaining the job he held on an interim basis during the second half of the season."

According to Mr. Zuckerman, it's down to Riggleman and former D-Backs' skipper Bob Melvin, with, "...the decision to come shortly after the World Series," and Mr. Zuckerman cites the fact that, "...none of the coaches from last year's staff are pursuing other openings," as evidence that, "Within the Nationals organization, the move seems to be toward the status quo."

Isn't the "status quo" back-to-back 100 loss seasons and the worst defense in baseball? But since this is the only news out of DC in the last week or so, I'm sure you all read Mr. Zuckerman's report yesterday, so my question is, what do you think of the fact that Mr. Zuckerman writes in the article:

"Washington ownership also is reluctant to spend top dollar on its manager, according to club sources, which would likely eliminate any high-profile candidates like Bobby Valentine or Buck Showalter, despite interest from both former managers in the job."

Will the Nationals spend the money they're saving by bringing Riggleman back (if these reports are true) on the free agent pitcher(s) and infielder they've been talking about since last September? Would you pay around $4 million for either Valentine or Showalter? Does Brenly have a chance? Any so-called dark horse candidates out there?

• (ed. note - "Just in case you didn't know, the AFL's Rising Stars Showcase will be televised on the MLB Network this Saturday. There will definitely be a GameThread here since both Stephen Strasburg and Drew Storen are on the AFL East's roster...If you're starved for baseball, Saturday night will provide a little relief to hold you over until Spring Training...Who's Watching the Nationals' Prospects?") 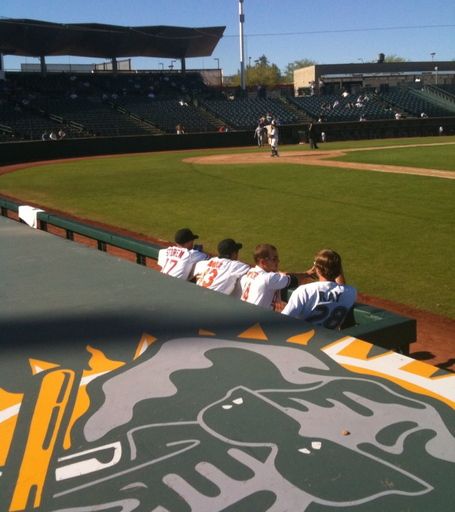