Washington Nationals: Spring Training 2009 - The Year Of The Outfielder.

Share All sharing options for: Washington Nationals: Spring Training 2009 - The Year Of The Outfielder.

In spite of a winter's worth of speculation, Washington Nationals' Manager Manny Acta has been steadfast in stating that Lastings Milledge, (who was often rumored to be headed for a corner spot in the DC outfield), is the Nationals' starting center fielder going into Spring Training, just as he was last season, with the corner spots to be fought over by four other outfielders, Josh Willingham, Adam Dunn, Elijah Dukes and Austin Kearns. (ed. note - "What a relative embarrassment of riches as opposed to the last few Spring rosters.")

MLB.com's Bill Ladson, (whose initial reports on the Adam Dunn signing had the 6'6'', 275lb left-hander playing first base for the Nationals), is now reporting, in an article entitled, "Nats corner outfield spots up for grabs", that Dunn will see time at first and in left this Spring, where he'll be competing with Nick Johnson and Josh Willingham, respectively, for playing time at each position, leaving Elijah Dukes and Austin Kearns to, uh, duke it out for the right field spot, at least, that is, if there are no further roster moves, and, granted that you believe the DC Skipper Manny Acta, (and I have no reason not to), when he tells Mr. Ladson:

""We have a center fielder," Acta said. "Lastings played the whole season there last year."

That's far from what was being discussed when the Nationals' '08 Season wrapped up, with both MLB.com's Bill Ladson in an article entitled, "Milledge receives help from White", and Washington Post writer Chico Harlan, in a Nationals Journal post entitled, "Milledge may be placed in corner in '09", wondering aloud whether a move to either left or right might be best for Milledge after he'd struggled in center late last season. Even amidst all the speculation, however, Nationals' Manager Manny Acta, according to Mr. Harlan, "...often has defended Milledge's outfield play...", and Milledge said at the time that no one had ever, "...talked to him about a potential swap," of positions...

If the trend of recent years holds up, one or two of the outfielders on the Nationals' roster won't make it out of Spring Training healthy anyway, or if they somehow do, then there's the DC outfielder's nightmare known as Opening Day, (which in the last two years has claimed Nook Logan and Elijah Dukes), so it's not out of the realm to believe that the Nationals will go forward with the redundacies in tact... (ed. note - "Though I can't shake the feeling that some other deals are in the works.")

The current MLB Network Hot Stove video segment at the Nationals' Official site, (which MLB.com has seamlessly (w/ slight buffering) integrated into each team's individual home page), features a panel of "experts" heaping praise on DC GM Jim Bowden's approach, in terms of loading up on outfielders and first base options and letting them compete, but this will only work if he can find takers for those players who lose the position battles this Spring. According to Harold Reynolds, however, in the Hot Stove video, (and don't let Steven from FJB hear this), for Mr. Bowden, finding bidders for his available players is, "...where Jim's at his best, and that's what he does the best out of anybody in baseball..."

Who is in your '09 Nationals' Outfield? NEW POLL

ESPN.com's Eric Karabell weighed in on the Nationals' position battles today, in an article entitled, "Nationals beef up lineup with consistent Dunn", where Mr. Karabell predicts that Adam Dunn will end up at first since Nick Johnson's "always" injured, and in his opinion, when it comes to the outfield, Mr. Karabell writes, "You don't want to be Austin Kearns, Wily Mo Pena or Willie Harris and expect to play a lot," since Milledge, Dukes and Willingham are guaranteed to get significant at bats.

Mr. Karabell's colleague at ESPN.com, Keith Law, starts his article about the Dunn signing entitled, "Nats only slightly better with Dunn", by writing, "Signing Adam Dunn only makes the Nationals somewhat less awful for 2009 and 2010," and it doesn't get much gentler, as Mr. Law's analysis continues:

"...given their inability in the past three years to convert veteran players on expiring contracts -- Alfonso Soriano, Dmitri Young, Ronnie Belliard or even younger time bomb Chad Cordero -- into long-term assets, this doesn't push the franchise forward at all."

(ed. note - "And that's only counting the DC years of the franchise.")

Then, after deeming Austin Kearns "utterly useless" and noting that Kearns, "...has forgotten how to do anything good with a bat in his hands," Mr. Law predicts that if Dunn's defensive deficiencies in left, or Willingham's wonky back force a move to first base for either player, it might end up, "...making (Nick) Johnson a candidate for release." Release? Seriously? Don't tell me you can't get something for Nick Johnson? Maybe the A's won't offer Daric Barton, but surely the Yanke...well, maybe the Ange..., uh, who needs an oft-injured first baseman coming off a broken leg and wrist surgery?

And now it's officlal, any residual admiration I had for "Don Sutton's Favorite Pitcher" Tim "I'm a 'Hated Met' Now" Redding has completely gone away now that I've seen this picture taken by AP Photographer Marc Levine... 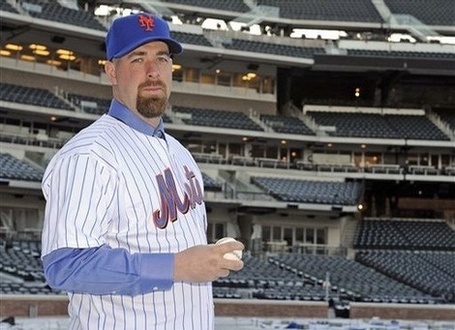 Do you think you can see into the future? Test your skills this season with the Federalbaseball.com Prediction Cup...DETAILS COMING SOON...(ed. note - "Predict player moves, predict outcomes of at bats or games...Feel a complete game shutout coming on? (ed. note-inside-an-ed. note - "CG, SO From a DC starter? What? It could happen..."), Think you can predict when Ryan Zimmerman's gonna unload on a fastball? When Elijah Dukes is about to rip the cover off the ball? When Dunn's about to go deep (or K swinging)? Prove it. All season long...