Washington Nationals: Spring Training 2009: Odalis Perez and The Case Of The Missing Lefty...

Share All sharing options for: Washington Nationals: Spring Training 2009: Odalis Perez and The Case Of The Missing Lefty...

I started the morning wondering what was up with "Opening Night" Odalis Perez after reading Washington Post writer Chico Harlan's Nationals Journal post entitled, "Bergmann To 'Pen, And Other Notes", where Mr. Harlan made mention of the fact that Perez was still unaccounted for two days after most pitchers and catchers had started reporting to Washington's Spring Training home, Viera, Florida's Space Coast Stadium. Mr. Harlan wrote simply:

"Odalis Perez is also a no-show, and Washington is trying to get in touch with their newly-signed pitcher to figure out the problem (Nationals' Manager Manny) Acta said."

By the time I arrived home from work, Odalis Perez had negated the need for that call with public pronouncements on ESPN Deportes, where the 31-year-old veteran left-hander told the world that he wanted some R-E-S-P-E-C-T from DC, and in his mind, the same salary and the same Minor League deal he received last season, with no guarantee of a spot on the roster was far from agreeable. ESPN Deportes.com's Enrique Rojas, in an article entitled, "Perez regrets giving approval to deal", again quotes Nationals' Manager Manny Acta, who says:

"'I really do not understand what is happening. I am waiting for Odalis since Saturday, but nobody has given me a reason for his absence from the field...'"

DC GM Jim Bowden told Mr. Rojas that, "The agreement has been signed...we expect Odalis Perez to honor his agreement with the club," to which Mr. Perez (indirectly) responds through the ESPN Deportes' reporter:

"'I thought it best and I prefer to sit in my house if the Nationals do not show more appreciation for my work,' Perez said from Santo Domingo.

"Appreciate my work means to increase the value of the contract and guarantee it. I will not accept any minor league contracts with no safeguards. I instructed my agent to report my position to the Nationals.'"

Perez's agent Martin Aruburua told MLB.com's Bill Ladson back in an 11/18/08 article entitled, "Perez keeping eye on free agent market", that his client wanted to take a look at whatever offers might be out there, while remarking that, "The Nationals lost a lot of games last year, so they have a lot of holes to fill," but what has been one of the stingiest free agent markets in recent history (with the exception of one NY-based franchise's free spending), must have left Mr. Perez with no other alternative to the Nationals' offer, which he reportedly had accepted on February 5th.

Now, however, Odalis Perez is threatening to go the Pedro Martinez route. The WBC. Where the left-hander will attempt to show the baseball world his true value while pitching for the Dominican Republic's powerhouse squad, as he tells ESPNdeportes's Enrique Rojas, "'I will play in the World Baseball Classic for the Dominican Republic and show everybody that I'm in great shape,' Perez said. 'I hope to find a team that values me, otherwise I'll go home.'" So Pedro Martinez is still unsigned, huh?

The Hated Mets Miss Jesus...Flores, That Is.

With rumors floating around the airwaves all afternoon about the New York Mets' interest in signing future-Hall-of-Fame catcher Ivan "Pudge" Rodriguez, or any other free agent catcher they can get their hands on, I turned to Newark Star-Ledger sports writer Adam Rubin's article entitled, "Catch as catch can", (which is about the Mets' pursuit of a backstop to either supplement or replace former Nationals' catcher Brian Schneider, whose subpar '08 season has "NY's other team" concerned heading into '09), to see what reporters on the Mets' beat were thinking, and what did I find, but this sorry lament...Mr. Rubin please?:

"The Mets would've been poised to hand the duties over to 24-year-old Jesus Flores about now, but he was left unprotected in the Rule 5 Draft in December 2006 and the Nationals grabbed him. He hit .256 with eight homers and 59 RBI's in 301 at-bats for Washington last season."

Awwww...Who would you want on your roster today, Lastings Milledge and Jesus Flores or Brian Schneider and Ryan Church? Oh, Metsies, I'm sorry. Why do I suddenly feel better about Gary Carter having been traded from Montreal to New York all those years back...

Jesus Flores, you'll be happy to know, has fully recovered from the shoulder block to the ankle Philly's Chase Utley laid on him last fall. The Nationals' starting catcher played with the Navegantes del Magallanes in the Venezuelan Winter League as he recovered this winter, and then Flores joined Ronnie Belliard, Anderson Hernandez and Daniel Cabrera with the Dominican Winter League's Tigres del Licey, and now, with no Brian Schneider, no Paul Lo Duca and no Johnny Estrada around, it's Jesus Flores all alone behind the plate in DC with what is (sadly?/arguably?) the best starting rotation the Nationals have started a season with in the five-year history of the relocated franchise...WWJD?

Who would you rather have, Flores and Milledge or Schneiderman and Church? Is there anyone out there who'll say, "Schneider and Church?"

Would you ever in a million years want the Washington Nationals to sign Pedro Martinez? He was an Expo you know? Here's a picture to remind you... 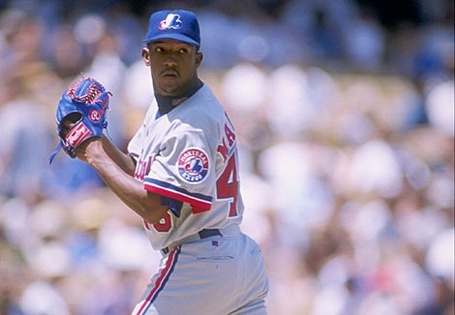 (Why do I see him wearing a Mets' cap in my mind?)