The Washington Nationals came to terms yesterday with the remaining players that had not signed contracts for the 2009 season, including Face of the Franchise (tm) Ryan Zimmerman. 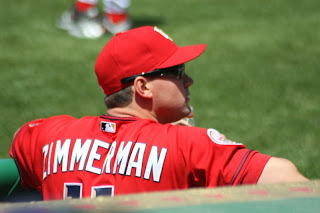 Zimmerman signed a one-year, $3.325 million deal, with incentives that could push the deal to $3.5 million, first reported by Chico at Nationals Journal.


Zim's one-year deal was not the long-term contract many Nats fans have been clamoring for, but does avoid a trip to the arbitration table, where the two sides would have had to argue the merits and deficiencies of the most important piece to the building puzzle that makes up the Nats roster as of today.


There is a wealth of opinion about the situation from my blogging brethren, and among Nats fans in general, but from my perspective, and apparently from the parties involved, there was no over-arching need to get the long-term contract done at this point. Both parties think they can still win the game they are playing. And it's funny, because both sides need Zimmerman to have a good, healthy year to make that happen.


The team obviously wants to have Zimmerman be part of this franchise for many, many years to come, but at a price that is reasonable and responsible. Zim missed a good chunk of last year due to the shoulder injury he suffered against the Orioles. The team needs to see a healthy Zim spraying line drives and diving around at third with impunity to be able to make the call on committing $8-$10 million a year on their biggest investment.


Zim and his representatives see the Markakis, Longoria and Pedroia deals and, reasonably, think that Zim belongs in that category as well, if not a notch above that. If the player goes out and has that .285/.385/.515 year with 30 homers and 100 RBIs that has been promised since the day he was drafted, well...the Markakis deal (6 years, $66 million) is just the starting point.


But if Ryan gives the Nats the quality stats but not quite deliver on the counting stats (say, 24 homers and 85 RBIs), or if he missed significant time to injury, then the team's prudence should pay off with a deal more in the range they are looking for.


I cracked open my brand-spanking new Baseball Prospectus last night, and Zim's comparables through his age 24 season are instructive as to the type of player he is. Three of his top four comps were Eric Chavez, Larry Parrish and Bob Horner. All three were pretty good-to-terrific players, when they were healthy. Chavez' rookie season wasn't as good as Zim's, but you couldn't ask for a better forecast for Ryan than Eric Chavez.


Here's a guy that for the first seven years of his career would hit .280/.350/.510, with 26-to-34 homers and right around 100 RBIs, plus play a gold-glove quality defense at third base. If Zimmerman could put up Chavez numbers, I think all parties would be ecstatic. It's no wonder the A's decided Chavez would be the one of their young All-Stars to give the long term deal to. Remember, they let Giambi and Tejada walk, and signed Chavez to the multi-year deal.


What happened? He hurt his back in his age 27 year, and has never been the same player since.


Parrish is an interesting study. Undrafted, he signed as an amateur free agent and was in the big leagues--full time--in three years. He was third in Rookie of the Year balloting in 1975 as a 21-year old, but his development stalled a bit due to some nagging injuries in his year 23 and 24 seasons. Sound like anyone you know? Then he got healthy and had his career year at age 25 (.307/.357/.551, 30-82, 4th in MVP ballots).


What happened? In his next nine seasons, he only had three years where he played more than 145 games. He was an All-Star at age 33 (33 HRs and 100 RBIs) and finished with 256 homers, but couldn't stay healthy enough to put him in the elite class of players.


Which brings us to Bob Horner, one of my all-time favorite players. Rookie of the Year at age 20. Three 30 homer seasons before he was 25. Struck out like he was a singles hitter, not a slugger.


What happened? Had an injury filled age 23 season, limiting him to 79 games. Bounced back the next year to hit 32 homers and 97 RBIs in his lone All-Star season, figuring the injury was past him. He never played a full season again and was done by age 30.


It's a dangerous game of chicken the two sides are playing. Both sides want Zimmerman healthy. Both want him productive. Both want him to sign a long term deal. But both both sides also want to be able to set the parameters of the deal. Who wins this dangerous game will determine those parameters, and the future of the Face of the Franchise (tm).
Photo (c) D. Nichols (2009).
For more Washington Nationals coverage, please visit Nationals News Network.