The Second Coming Of The Washington Nationals' Nick Johnson...

Share All sharing options for: The Second Coming Of The Washington Nationals' Nick Johnson...

The first reports on Nick Johnson this Spring came from MLB.com's Bill Ladson, who wrote, in an article entitled, "Johnson receptive to altering approach", about the adjustments the Washington Nationals' new Hitting Coach Rick Eckstein and the Nationals' prospective first baseman were making to Johnson's swing. Somewhat startling for anyone, (who, like me), has always enjoyed watching Johnson swing a bat, was his admission, as Mr. Ladson writes, that after testing Mr. Eckstein's advice:

"Johnson agreed that his approach at the plate over the years was 'backwards.'"

Johnson, (who recovered and returned from the horrific '06 outfield crash with Austin Kearns that resulted in a fractured right femur and cost him the entire '07 season, only to be felled by a wrist injury which limited him to 38 games in '08), told Mr. Ladson, after, as Mr. Ladson described it, "hitting nothing but line drives to right field" in the batting cage, his surgically repaired wrist, "...is not pain-free, but it's pretty close. The more I swing the better it feels."

In an AP story out of Viera, FL and the International Herald Tribune entitled, "Nats' Johnson retools swing in latest comeback", the AP writer quotes Nationals' Manager Manny Acta, who calls Johnson, "a bona fide 20-plus-home-run guy", and the unnamed AP writer registers the same incredulous reaction I did when Johnson tells him that when it comes to his approach at the plate, "My thinking over the years...Has been completely backwards," to which the reporter replies:

"Really? Johnson, let's not forget, produced 23 homers, 46 doubles, a .520 slugging percentage and a .428 on-base percentage in his most recent full season."

But Johnson and Eckstein both think they've found the left-handed hitter's "'A' swing" as Mr. Eckstein calls it, and the AP writer relays how the player and coach spent a considerable amount time watching film of Johnson's swing as well as those of, "...some of baseball's greatest hitters, including Ted Williams, Hank Aaron and Barry Bonds," with Johnson determining that, "They have a lot of things that are similar."

(ed. note - "The AP writer also reports on Eckstein's work with Ryan Zimmerman, Austin Kearns and Lastings Milledge, all of whom have spent time watching film and working with the Nationals' new Hitting Coach.")

Where Johnson will play this season, (if he's healthy, of course), is one of the biggest questions to be answered before Opening Day...In the AP/International Herald Tribune article, DC's Skipper Manny Acta restates his position that ideally he'd like to have both Adam Dunn and Nick Johnson (and their OBP-powers) in the batting order, with Mr. Acta going so far as to say, "It makes a lot of guys salivate, including myself, to have two guys like that in the lineup," but both the AP writer, and Washington Post writer Chico Harlan have reported, as Mr. Harlan writes in a Nationals Journal post entitled, "Kasten expects heavy trade talk", that Adam Dunn has already practiced as an outfielder and first baseman, and the titular Spring Training trade talk will likely center around Johnson, as Mr. Harlan notes:

Who thinks Nick Johnson will be a National on Opening Day? In Mr. Harlan's article, Nationals' Team President Stan Kasten is quoted as saying, "...I would expect heavy trade talk between now and opening day," and somehow Johnson, coming off wrist surgery and a broken leg, is the most desireable National to be had. Should the Nationals trade Nick Johnson and his career .396 OBP, .456 SLG, and his baseball-reference.com 162-Game Avg. of 36 doubles, 21 HR's and 81 RBI's per?(Though, realistically, you should probably adjust for 140 games played.) Are the Nationals better off with Johnson at first and Dunn in left? And then what do you do with Josh Willingham? If you trade Johnson, Dunn plays first, Willingham left and Austin Kearns or Elijah Dukes in right? What about DY? So many questions, so much time... 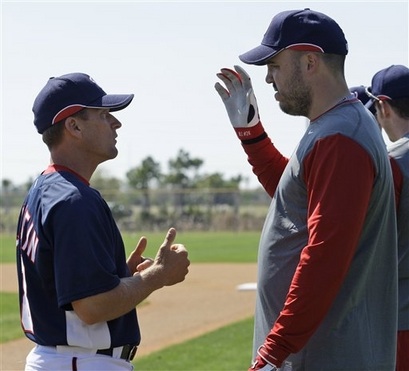