Is Adam Dunn The New Face Of The Washington Nationals?

Share All sharing options for: Is Adam Dunn The New Face Of The Washington Nationals?

The stage Adam Dunn's playing on right now, starting in right field for the U.S. team in the World Baseball Classic, has given the 6'6'', 240-pound, left-handed home run hitter more of a spotlight than he ever had during his 8-year career with the Cincinnati Reds, or even in the playoff chase late last season with Arizona Diamondbacks, but soon he'll be returning to nation's capital to play with the Nationals. Adam Dunn's signing with the Washington Nationals may have escaped some amidst all the offseason intrigue, but to the "fan base and season ticket-holders", in Washington, as ESPN.com's Tim Kurkjian wrote yesterday in an article entitled, "Dunn about to become another new face in D.C.", Dunn "provides hope" while simultaneously giving the Nationals' franchise "a little credibility".

Mr. Kurkjian then provides a more eloquently distilled version of the argument I'd been making against signing Dunn since the idea of adding "The Big Donkey" to DC's outfield (or IF?) first surfaced in the Washington press, as he writes, "Dunn is going to have about 190 strikeouts, and he might not even hit .250," but then in the next line, Mr. Kurkjian, in one-half-a-sentence, almost completely sells me on the idea of Adam Dunn in DC, either at first, or (hopefully for Nick Johnson fans) out in left field, as Mr. Kurkjian continues:

"...but [Dunn's] going to be a guy to watch because he hits balls to distances not seen in Washington since the days of Frank Howard." 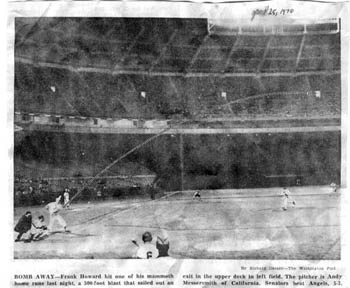 (ed. note - "Here's Where That One Finally Stopped...or the view toward home from the hopefully (for safety's sake) empty seat where it eventually landed...") 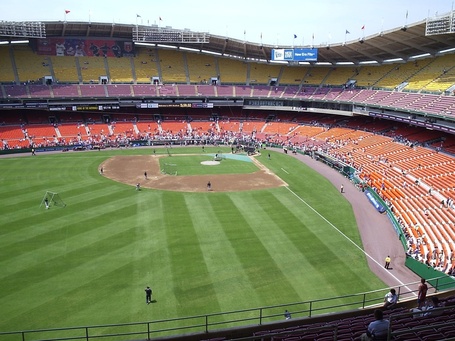 Any Nationals' fan who saw the home run Adam Dunn hit into the second deck at the Rogers Centre against Venezuela Sunday night had to be wondering where exactly that would've have ended up in Nationals Park, and I imagine it's a part of the Park we haven't really seen yet on tv or had our attention drawn to while at games...

Wherever Dunn plays in the field, he'll be batting fourth, behind Ryan Zimmerman, and in front of Nick Johnson (if he's not traded) or maybe Josh Willingham, (if Johnson is), with, it's believed, Lastings Milledge or Cristian Guzman leading off and batting second, (one or the other) and Elijah Dukes or Austin Kearns, Jesus Flores and Anderson Hernandez hitting sixth through eighth in some as-of-now-undetermined order. Will Dunn be able to do what he's done historically while hitting in this lineup?

The question was put to the SportingNews.com's Bill Bender in an article entitled, "Mailbag: Done with Dunn", (which pennantchaser1 linked to here yesterday in a FANPOST) and Mr. Bender's response was that you can, "Figure Dunn for about 35-38 homers this season," which would be 21 or 24 more than anyone on the Nationals' roster hit last season, and the 96 RBI's Dunn's good for every one-sixty-two (according to baseball-reference.com's 162-game AVG) would have led the Nationals by 35 over Lastings Milledge's team-leading 61.

And who knows? If Dunn does happen to hit 40 HR's again this year, in what would be the sixth-straight season he'd have done so, as Mr. Kurkjian pointed out back in the article entitled, "Dunn about to become another new face in D.C.":

"Babe Ruth will be the only player in history with a longer streak of consecutive seasons with at least 40 HR's."

...Meaning that in the second year of his contract he might actually tie the record that Ruth set over seven seasons in NY when The Babe hit anywhere from 41-60 every year with the Yankees from 1926 to '32...and DC baseball fans could at least take part in Dunn's making history while they wait for the team to actually compete...

So when he gets back let's welcome our new K-Leader, the Big Donkey, or Dunn-K, the Bigger Wilkerson or just Big Wilky for short, either way he's ours at least until someone offers a good trade, and heck, Cincinnati got ( 24-year-old minor league pitcher Dallas Buck, Wilkin Castillo - ranked the best catcher in Arizona's system by Baseball America's Will Lingo as late as Dec. '07 and Micah Owings who was ranked as high as 6th on Mr. Lingo's list of Prospects the year before he debuted), in return for Dunn from the D-Backs when they dealt him last season, so this could just end up working out after all...