(ed. note: "MLB.tv viewers, the game is being broadcast on the internets today, so everyone can watch the Nationals and Orioles...Who's Watching The Watc...Nationals?")

We're gonna try something new today...Doghouse, leader of the federalbaseball.com W.A.R. Effort, is on his way to Ft. Lauderdale, Florida's cleverly-named Fort Lauderdale Stadium, the Spring home of the Washington Nationals' Mid-Atlantic rivals, the Baltimore Orioles, and he'll be reporting live via iPhone this afternoon...I'll add updates throughout the game, so if you're watching(It's on MASN!! and MLB.tv!!) or listening or following along, check back for some updates or stay with us for the first attempt at a live game thread this season...

Back with more soon...

DC's Own DC, Daniel Cabrera throwing strikes...(or at least fastballs)...check out the box score for the O's lineup...

The Orioles' fans are watching too, check out the SBN's Baltimore Orioles blog:

...to see what O's fans are thinking.

"It's a cavalcade of scrubs except for Guz at short and Cabrera pitching..." 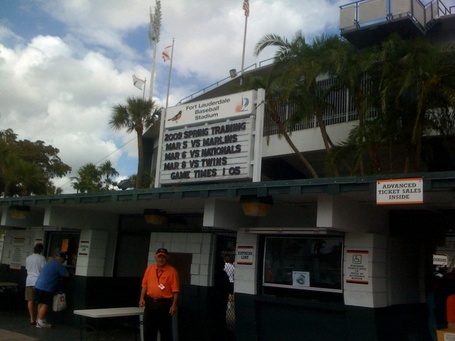 "Away, there goes my scoops (ed. note - "?"), Hmmmm, a few drops of rain. Eldred(Who?) with a perfect bloop single to short...after Cintron and Casto flied to OF...Cabrera looks VERY TALL..."

"For a guy who practically hands the ball to (catcher Wil) Nieves, he's having trouble finding the zone...and Cabrera walks Huff...Nats are looking very much little league right now...'This feels too familiar,' Mrs. D mutters as Cabrera issues another free pass...(ed. note - "But Roger Bernadina saves the day with a diving catch to rob Felix Pie on a bases loaded liner...1-0 O's after one...")

"Awesome! After a diving catch worth of TAWH, Bernadina knocks in J.Castillo with a beautiful broken bat double that bounces exactly over first, and hooks away. I almost see JimBo's love of toolsy OFers with no power..." 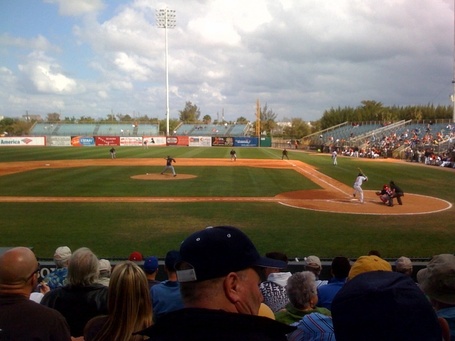 "As a humiliating double steal goes down, the O's fan next to use shakes his head with a rueful and sympathetic grin..."

"(Ross) Detwiler to the rescue!"

"Detwiler pitches with a real easy-looking motion, 'He looks like the ball can hurt him," notes Mr. Doghouse, 'He's got an O'Connor build. Despite a free pass, Ross Detwiler gets a DP ball, prompting an eyeroll from out neighbor, 'He's (Wiggington) beyond slow." 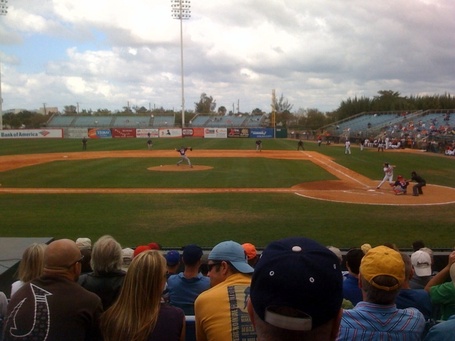 "This inning, Casto doesn't quite have Zimmy's range. 'I think we're gonna say goodbye to Detwiler,' sighs Mrs. Doghouse, 'Although I would like to see the Human Rain Delay...."(ed. note - Human Rain Delay = Jesus Colome?")

"(New DC Pitcher Preston) Larrison throws as hard as Cabrera with just as much control...(another double steal follows a walk and a HBP)...and he gives up the double steals, like Cabrera...Mmmm, soft serve! Larrison has a walk, HBP, double steal, no coffee for you, sir!" 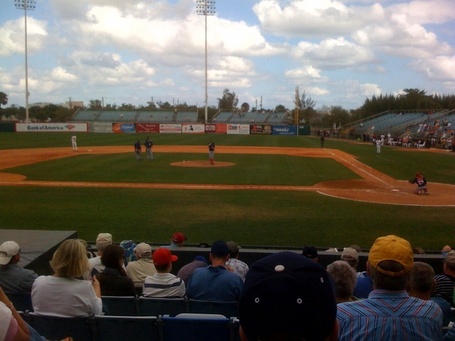 "Hard to tell with my non-zooming phone cam, but I think you can see the red socks, (Mike Hinckley) plays w/ his pants up like a real ballplayer."

"Hinckley is throwing hard and changing speeds -- like a real pitcher almost! Two groundouts to 3rd so far, and Casto only made me slightly nervois on the plays. An easy popup to Bernadina? to end the inning, and I think we're down to no starters in for DC..."

"(Steven) Shell in to pitch. Promptly gives up a single up the middle...TARB now in center robs a bloop single...(Ian) Desmond goes back on a fly ball, frantically waving off everyone else...(Jorge) Padilla, who clearly has a bead on it, yells, 'I GOT IT!!' loud enough to hear it in the stands and makes the play...J-Max with a booming triple off the wall in RF. Let's see what this Herrera can do..."

"WOW! 18yr-old Destin Hood waits out a full-count walk! (ed. note  - "And then takes second on a ball in the dirt.")...TARB smacks a double into the RF corner...(moving Jorge Padilla around, he stops at third) I never thought I'd miss Tim 'Send'em' Tolman, even though it was probably the right call..2 down for J. Maxwell, who grounds to second to end the DC 8th.)

(ed. note - "For the Completists...Full Game Report after the jump...though there were too many subs, so Full-Unedited Game Report is probably more like it...")

We’ve got baseball, and it’s on TV!!! Nationals vs Orioles. Cristian Guzman starts the day by poking a single through short off O’s starter David Pauley. Alex Cintron gets caught looking for heat when a change is coming, swinging strike three. Kory Casto skies one to left, former Cubs’ prospect Felix Pie closes his glove on it...(Pie, Adam Jones and Markakis? Nice outfield, O’s, seriously.) Brad Eldred finds some grass in short left, and Guzman speeds around to third. Corey Patterson gets caught looking, and it’s time for a first look at Daniel Cabrera...Adam Jones rips into a 1-2 pitch from Cabrera to move Brian Roberts to third. Nick Markakis grounds to second, Roberts scores, 1-0 Orioles. Aubrey Huff gets ahead in the count again and Adam Jones steals second. Huff walks. Huff steals second off Cabrera. Cabrera walks ??? to load the bases. Cabrera gets Luke Scott swinging at a ball out of the zone for the second out. Roger Bernadina saves the day with a diving catch in left to rob Felix Pie. 1-0 after one.

Jose Castillo grounds to short, and gets a free pass when Ryan Freel throws wide of first. Roger Bernadina rips a line driver over first and into right, Castillo scores, 1-1 ballgame. Justin Maxwell gets called out looking at a fastball low on the outside corner. Wil Nieves grounds sharply to short, Freel gets this one. Cristian Guzman grounds out to second, 1-1 after one and a half...Ryan Freel gets robbed by Roger Bernadina again!! Diving catch on what should’ve been extra bases!!! Brian Roberts finds some grass Bernadina can’t get to for a two-out single. Adam Jones rips a two-out double to right. Double steal off Cabrera puts both runners in scoring position. Cabrera busts Markakis low and inside for a swinging K to end the threat...

Jose Castillo grounds out to first. Kory Casto grounds back to the mound for the second out. Fly ball to left from Brad Eldred to end the top o’ the third...Ross Detwiler walks the first batter he faces, Aubrey Huff. Ty Wiggington grounds to Casto at third, Castillo at short, to Eldred, double play. Luke Scott gets one under Brad Eldred’s glove at first for a two-out double. Kory Casto makes a Zimmermanesque stab at Felix Pie’s grounder, but can’t beat the speedy Pie to first. Robby Hammock rips a grounder through short for the two-out RBI to give Baltimore back their lead. 2-1 O’s. Ryan Freel grounds to Casto at third, throw to first, 2-1 O’s after three.

George Sherrill takes over on the mound in the 4th. Corey Patterson chases a high heater from Sherrill. Jose Castillo finds the gap in right center for a double with one down. Bernadina grounds out to second, Patterson to third, two down for Justin Maxwell. Maxwell takes the first pitch to center, Adam Jones makes the grab...New Nationals’ pitcher, Preston Larrison, walks Brian Roberts to start the O’s fourth. Adam Jones gets hit by Larrison, two on, no outs. Double steal. Nick Markakis takes a high called strike three. Huff singles up the middle, two runs cross, 4-1 Orioles. Ty Wiggington flies out to Maxwell in right...Matt Wieters doubles to left and another run scores, 5-1 O’s. Larrison is done. Mike Hinckley comes on to face Felix Pie. Larrison is done. Pie grounds to second, and Jose Castillo throws it by first, 6-1 O’s on the error. Chad Moeller flies out to shallow left to end the fourth.

Jamie Walker, the veteran lefty starts the fifth...Wil Nieves swings over a slow bender for the first out of the fifth. Cristian Guzman lines out to Adam Jones in center. Alex Cintron pushes an outside fastball into right. Kory Casto grounds into a force at second to end the DC fifth...Ryan Freel grounds out to Casto at third on the first pitch of the O’s fifth. Brian Roberts grounds out to Casto. Adam Jones flies out to right, and Hinckley’s got a quick frame

Nationals sixth starts with Dennis Sarfate on the mound for the O’s, striking out Brad Eldred. Jorge Padilla K’s looking for the second out of the sixth. Jose Castillo reaches on a chopper to third that Wiggington can’t get to first in time. Roger Bernadina flies out to Felix Pie in left,, 6-1 after the DC fifth...Steven Shell takes over on the mound.  Nick Markakis starts the frame with a single up the middle and then is replaced by Holbert Cabrera. Craig Brazel flies out to Bernadina in center. Shell gets a fly ball from Wiggington for the second out. Matt Wieters flies out to left, Shell gets through a scoreless frame.

Justin Maxwell starts the seventh with a wind-aided triple off the outfield wall. O’s pitcher Chris Tillman gives up a grounder to short to Javy Herrera that brings Maxwell home. Ian Desmond flies to center for the 2nd out. Destin Hood patiently takes a two-out walk. Kory Casto up, Hood takes second on a pitch in  the dirt...Casto goes down swining...Stand up and stretch...Steven Shell’s back out for the seventh. Nolan Reimhold? flies out to Jorge Padilla in left. Chad Moeller grounds to Kory “The Vaccuum” Casto at third. Justin Turner rips a two-out single to center. Donnie?Murphy grounds to third, and Casto fires to first...On to the eighth...

Chris Marrero leads off the eighth with a line drive single to left. Chris Tillman’s stll on for the O’s,  Jorge Padilla grounds into a force at second cutting down Marrero. Jose Castillo goes down (somehow? Sorry.) Roger Bernadina doubles to right and moves Padilla to third. Justin Maxwell grounds out to second to end the DC eighth...Bobby Brownlie to pitch the bottom of the eighth. Justin Christian backs Justin Maxell up to the wall where he catches the first out. Jolbert Cabrera goes down chasing. Craig Brazell flies out to left...Three outs to get four runs...

Freddy Deza tries to end it for the O’s. Javier Herrera chases high heat for the first out. lines out to Donnie Murphy. Destin Hood grounds out to first to end it. 6-2 O’s win.