Mrs. Doghouse and I are on the road to Viera, following Our Boys over a long weekend of Spring Training.  We started our trip in Fort Lauderdale at the prosaically-named Fort Lauderdale Stadium to see the Nats B-side (possibly C-side..) take on the Orioles.  A few pics after the jump.

Overheard as we got to our seats:

"The Os are the most steroid-penalized team in the league."

I have no idea what the guy meant by that. We weren't the only Nats fans there!  Between us and the Os fans, we almost equaled the number of Mets fans. 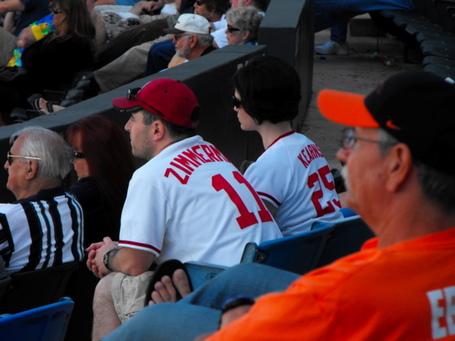 A new season is coming, and there are lots of new faces.  Who the heck is this guy? 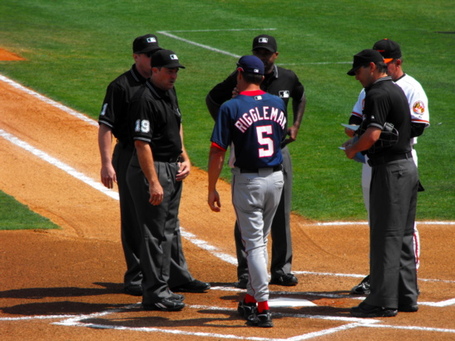 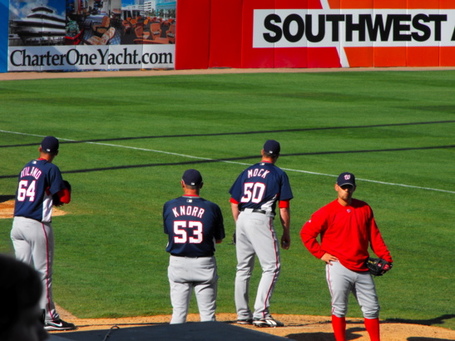 Yeah, a nice action grab--too bad it's a ground out.  I guess the other big name in today's game was Daniel Cabrera.  If he makes the rotation, get used to this tableau: 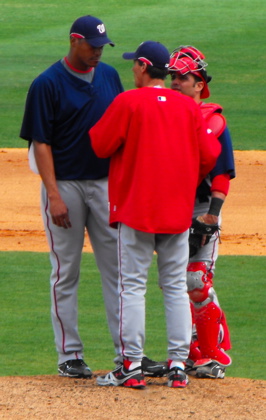 Despite St. Clair's expert ministrations, Cabrera stank on ice today.  Poor control, walks a-plenty, and hard hits when he did get 'em over the plate.  Oh, and that s l o w motion to the plate that resulted in about 4 or 5 stolen bases (including a double steal after a walk and hit batsman).  Nieves had a few strong throws, but runners were getting such big jumps on DC that he had no chance to throw anyone out. 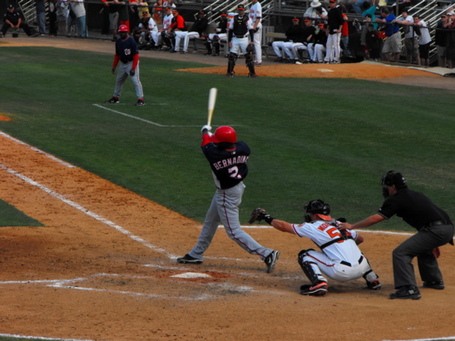 That's The (provisional) Amazing Roger Bernadina ripping one of his two doubles to right today. T(p)ARB had a heck of a game today, showing the brilliant flashes of glovework we'd suspected before. The genial Mets fan next to us kept shaking his head and saying, "It's Spring Training!  Play it off the wall, why don't you?"  A couple of terrific diving catches, and those nice two-baggers (thanks to Dukes' apparently-contagious magical hitting powers) made for a real bright spot in the game.

Another familiar name was Ross Detwiler, who was throwing with a loose, easy motion despite the gangly tangle of arms and legs that resulted... 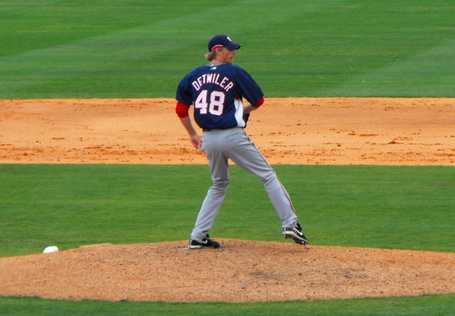 ...but not having too much success today.  Having even less success?  Larriman: 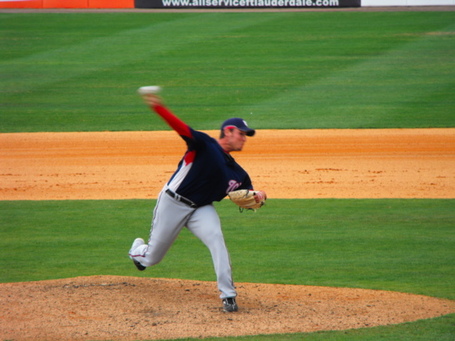 He was throwing the ball hard, like Cabrera, with just as much control... and success.  Walks, hard hits, and even a slow delivery that gave up another double-steal.  You can see him straining to hurl it out there in this picture.

On a more upbeat note, we got a nice look at some prospects.  Here's Chris Marrero stroking a single: 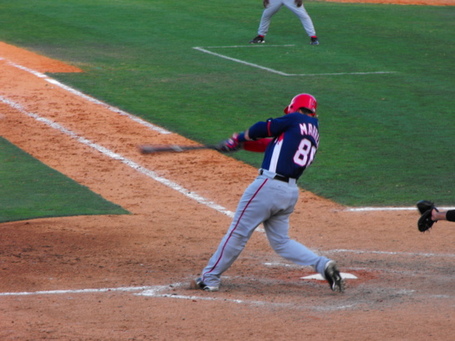 Recent draftee Destin Hood, all of 18, showed quite a bit of poise and a nice Discerning Eye, working a full count and taking a walk: 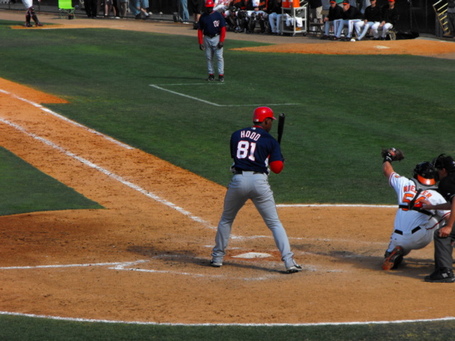 Mrs. Doghouse was disappointed in the baggy Spring Training uniforms (her usual nickname for Manny is "Hot Pants" Acta): 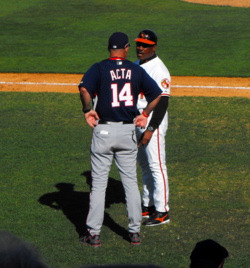 Finally, we did see some decent pitching (from the Nats) today.  Shell and Hinckley were both steady (although it was mostly scrubs by the time Shell was out).  Hinckley wears his socks up, like a real ballplayer. 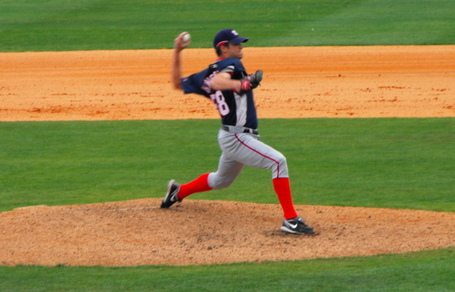 We're in Port St. Lucie to see our boys go up against the Hated Mets at Tradition Field.  I may not be able to do live updates, but I'll try to get together an update with some pictures Saturday night. Let's Go Nats Go!