Quick Recap - The Washington Nationals just can't win. DC starter Daniel Cabrera wasn't the disaster everyone expected, the DC Faithful turned out after all, and the Nationals were able to stay in it until the seventh inning when Saul "Sa-ool" Rivera hit two batters in front of Ryan Howard and then served up a 3-run blast to the Philly slugger, but even then, Ryan Zimmerman's 2-run ninth inning HR would have been enough to tie it if Adam Dunn hadn't lazily played a single to left from Eric Bruntlett into a double in the eighth, putting the eventual winning run in scoring position, and allowing two sacs to score Bruntlett from third. 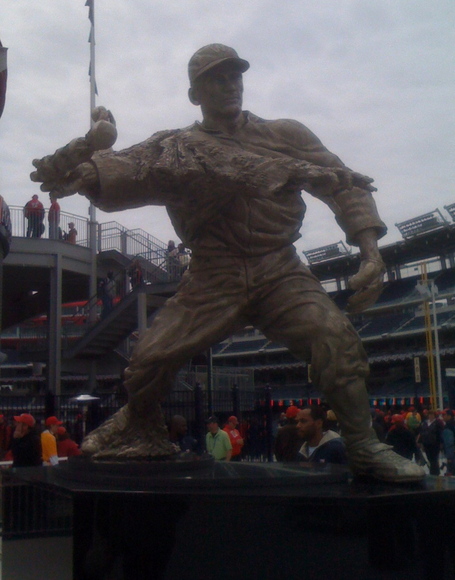 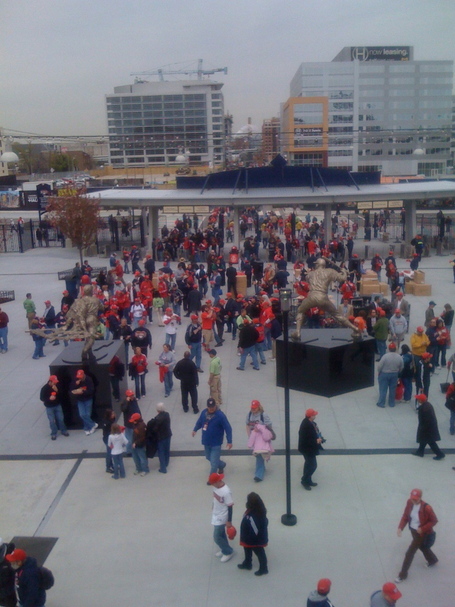 I took the Metro to today's game, arriving just after the gates opened to find Nationals Park already half full in spite of reports that said the Washington Nationals might be opening the season in front of an empty house. The DC Faithful did turn out, and the Philly fans that Washington team President Stan Kasten invited were for the most part respectful guests in the Nationals' home...(ed. note - "I didn't even hear one Philly-centric chant.") 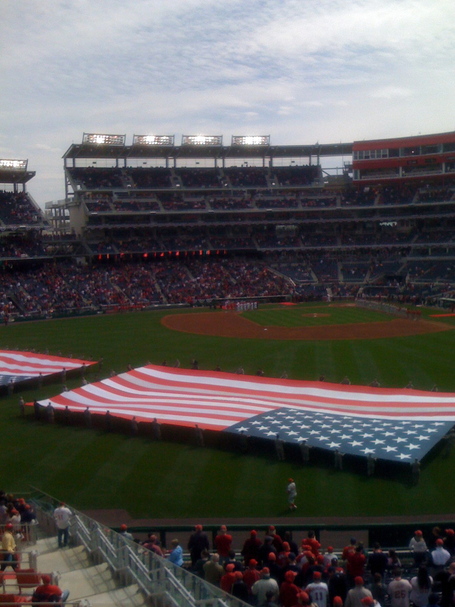 Unfortunately for the Washington Nationals, the Phillies themselves weren't nearly as easy to deal with as their fans, as they lit into the Nationals' pitching to the tune of 10 hits and 9 runs. The Nationals nearly matched the Phils' offensive output, but Washington's pitching faltered again, with starter Daniel Cabrera and reliever Saul "Sa-ool" Rivera allowing 4 runs apiece, though only one of Cabrera's was an earned run. 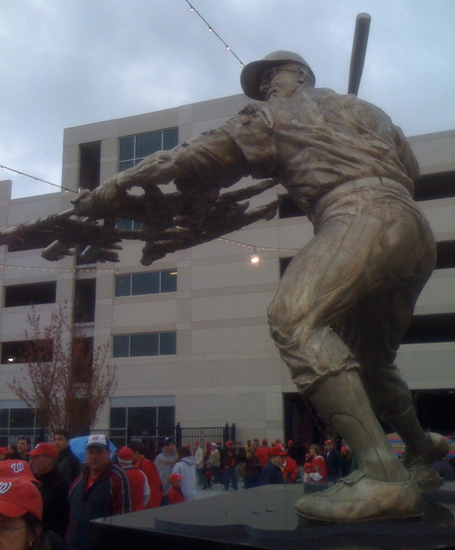 The crowd surrounding me where I sat about 30 rows behind the visiting team's dugout had little patience for Daniel Cabrera's control issues, sighing en masse at times, and even offering "Bronx cheers" when the 6'7'', 230 lb right-hander would occasionally locate the zone. But it was the Nationals' defense, not their starter, who let the DC Faithful down while Cabrera was on the mound.

After striking out Ryan Howard to start the second, Cabrera gave up a single to Jayson Werth and got an infield grounder out of Raul Ibanez that an error by Anderson Hernandez turned into a hit. Cabrera, with runners on, completely fell apart, walking the bases loaded, walking in a run and allowing a sac fly from the Phils' starter Jamie Moyer for an early 2-0 Philly lead. 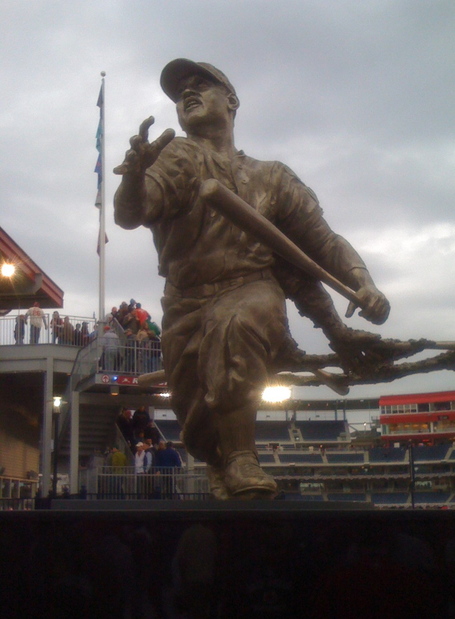 A 2-2 fastball to Shane Victorino that left the yard in a hurry in the third could be hung on Cabrera, but in the fourth, an error by slow-footed left fielder Adam Dunn turned a Raul Ibanez single in to a double, and two-outs later Ibanez scored from third after a sac by the pitcher and a double by Jimmy Rollins brought him around to make it 4-2 Philadelphia.

Cabrera was out after 5.0 wild IP, in which he allowed 6 hits, 4 runs, (1 earned), a double, a HR and 2 walks, while striking out 2, and throwing 94 pitches in 5 frames, only 55 for strikes. The Nationals pulled within one after Eljiah Dukes launched a one-handed line drive home run to left to make it 5-4 Philly after the five. 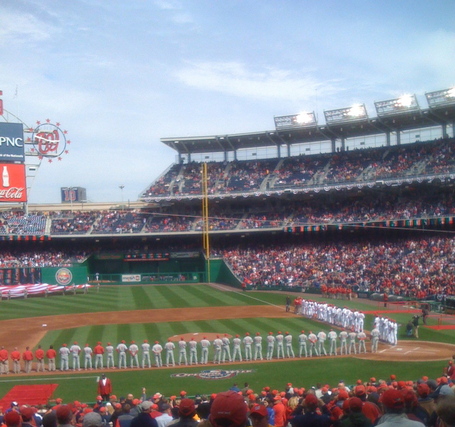 Julian Tavarez and Mike Hinckley combined for a scoreless sixth, but Saul Rivera started the seventh by hitting two batters and followed up with hanging sliders to Ryan Howard and Raul Ibanez, resulting in Howard's 3-run blast,  Ibanez's solo shot, and an 8-4 Philly lead.

The Nationals add two in the seventh on an Adam Dunn dinger, but the Phillies get one right back in the eighth when Dunn lazily plays a single by pinch hitter Eric Bruntlett into a double, allowing a ground out and a sac fly to score Bruntlett from third for what would eventually be the decisive run. Ryan Zimmerman knocked in the only runners on base when he came up in the ninth with a long fly ball to center, but Dunn and Elijah Dukes came up empty striking out chasing Brad Lidge's junk and Nick Johnson rolled over more of the same for a weak grounder to first and the Nationals' seventh straight loss...

Line of the Day: The Fan sitting next to me in Section 116, who sang along to "Take Me Out To The Ballgame", but inserted the line, "Buy me some PITCHERS and Cracker Jacks..." Pretty much sums it up...

(ed. note - "Working on the post game, have pics from Opening Day and a Game Report up shortly.")

Bad News...Cristian Guzman leaves the game with an injury.

But the real bad news of the day...Phillies announcer Harry Kalas passes away at Nationals Park. 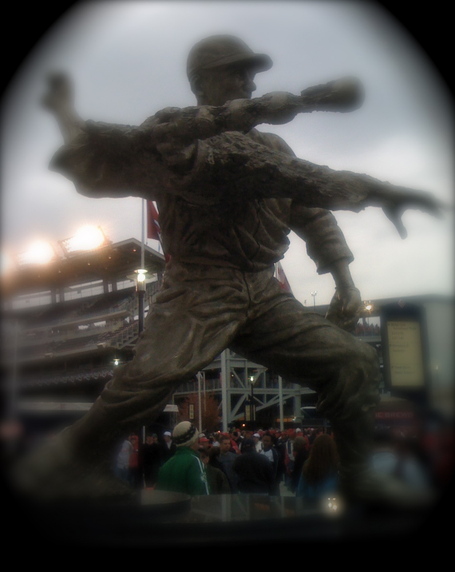