Tuesday Nats Stats: Meaningless Tidbits and the Many Moods of Adam Dunn

Share All sharing options for: Tuesday Nats Stats: Meaningless Tidbits and the Many Moods of Adam Dunn

It's a rainy off-day, perfect for mulling Nats Stats.  Sadly, with only 7 games' worth of stats, there aren't enough numbers piled up to say anything meaningful--not that I intend to let that stop me!  Random stat-based Fun Facts after the jump, offering a few unsubstantiated causes for hope (although more for pessimism)--plus a few Opening Day pix.

We all know that Nationals get no respect--but do they respect themselves?  Check out this shot I took of a band playing before opening day.  They're decked out in red home jerseys, which is nice, but what's wrong with this picture? 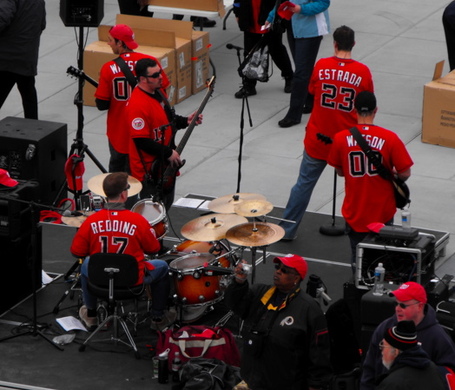 Well, I suppose we should be glad they had jerseys for people who were still in the system somewhere, even if not on the 25-man...  (The bassist was also wearing a Redding jersey--what, we didn't have any of Odalis Perez's left?)

Anyhow, let's start off with the big picture stats: wins, losses, and runs.  The Nats are league-trailing 0-7 right now.  How bad are we really doing?  Let's take a look at our expected "pythagorean" W/L (a Bill James concept that compares runs scored and runs allowed to figure an expected W/L) to project this out over the season.  We have 34 runs and 54 runs allowed as of yesterday; if we keep up that ratio, we can look forward to a 46-116 record.  That's replacement level.  '62 Mets, here we come!  (Take a deep breath and repeat after me: stats mean nothing this early in the season. Meditate on the following picture of Adam Dunn.  I call it, "Low and away.") 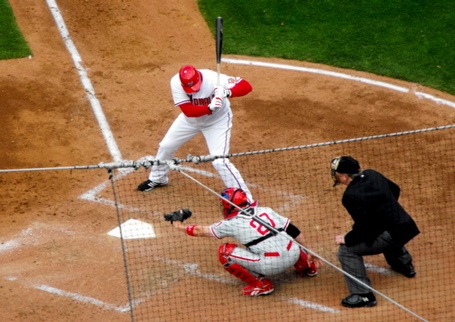 Are there any bright spots?  Heck's yeah!  We're scoring 4.86 R/G so far, squarely in the middle of the pack in the NL. Take a look at some of the hitting (recall that OPS+ is set so league average is 100: more than 100 is above average, less than 100 is below average).

There aren't really any other highlights in batting. Zim is lagging with an 86 OPS+ (but 2 HR!), while the other starters are struggling with 70ish OPS+ (NJ, Flores, TAWH--AK manages an 80, which isn't much better).  (Take a deep breath and repeat after me: stats mean nothing this early in the season.. unless they're good! Meditate on this picture of Big Walkie. I call it, "Inside.") 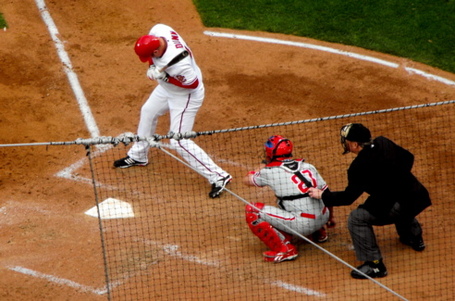 That brings us to the pitching staff... oh, boy...  Nationals starters have no quality starts so far this season, an "honor" they share with the Fillies.  As I mentioned above, run support is decent--slightly below average for the starters. We do trail the league all alone in IP by starters, with an average of only 4.4 per game (that's right, our starters only pitch about half of the games).  Team ERA is 7.71, which, again, trails the league.  (Take a deep breath and repeat after me: stats mean nothing this early in the season. Meditate on the following picture of Dunn[-K|-BB].  I call it, "Double to right") 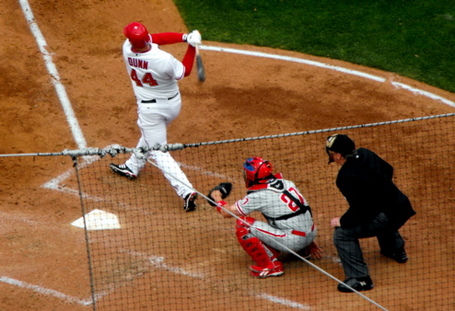 Well, how about fielding?  After yesterday's error-tastic outing, we currently lead the league in errors, with 7!  We're only 15th in fielding percentage though (at 0.972), so it's not all bad.  We've given up 6 stolen bases (all to Emilio Bonifacio, or so it seems) and had 3 passed balls and no caught stealing.  Not exactly glorious.  (Take a deep breath and repeat after me: stats mean nothing this early in the season. Meditate on the following picture of #44.  I call it, "How ya like me now, b*****s?!  Just wait 'til next game!  Where's my gum?") 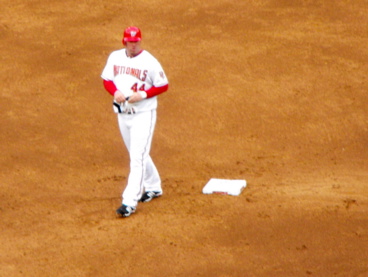