GameThread: Washington Nationals at San Francisco Giants- Game 31 or 32 of 162. THE KIDS CALL IT THE STREAK!!

Share All sharing options for: GameThread: Washington Nationals at San Francisco Giants- Game 31 or 32 of 162. THE KIDS CALL IT THE STREAK!!

?'s For The DC Faithful?

• How Much More Confident Are You Going In With Tonight's Starter As Opposed To, Say...(whispers, "Daniel Cabrera"?)

• How Long Can You Wait With Daniel Cabrera?

• Did Hammer's Straight-Up Miss Last Night Send Him Back To The Bench?

• Where Is Jesus Flores?

posted by e chigliak about 7 hours ago

It's time to end the experiment

posted by bluelineswinger about 16 hours ago

posted by bluelineswinger about 21 hours ago

San Francisco right-hander Matt Cain is off to the best start of his two+ year MLB career, having won 3 of his first six starts, and tonight the Giants' '02 1st Rounder goes against a Washington Nationals team that he held to just one run in two starts and 15.1 IP last season. During Washington's last visit to AT&T park, Cain took on DC, on July 24, 2008, and the then-23-year old starter threw 9.0 scoreless innings for a complete game shutout win in which he outdueled former Nationals' starter Tim Redding.

Tonight the Nationals throw everyone's favorite new right-hander, Jordan Zimmermann, that's two "nn's" got it, and that's how you know he's not related to Streaky, so don't ask, or belabor the issue, it's settled, let's move on...Zimmermann makes the fifth start of his first year above Double-AA ball, and so far he's (1-0) in two road starts with a win in New York where he held the Mets to 1 run over 6.0 and a no-decision in LA where he was hit hard early and hung around long enough to let the Nationals fight back and win.

The Nationals vs Cain...

When Someone Sends You A List Of The Worst Owners In Baseball, What Do You As A Fan Of The Washington Nationals Assume?

I assumed the worst when SI.com sent me a preview of a feature article they posted today entitled, "SI's Best And Worst Owners" in which they ranked the 5 Best and Worst owners in the four major US team sports. Expecting to see the beliefs of the "Lerner R teh cheep" crowd reinforced in the list of the Worst Owners in Baseball, I scroll down the list to find the owner of the Washington Nationals, Ted Lerner, ranked 5th, behind my arch nemesis, Jeffrey Loria, who NOW owns the Florida Marlins, Kansas City Royals' owner David Glass, Texas Rangers' owner Tom "A-Rod Contract" Hicks and the #1 Worst Owner in Baseball, at least in SI.com's estimation, Peter Angelos, who owns the Washington Nationals' neighbor to the north, the Baltimore Orioles. 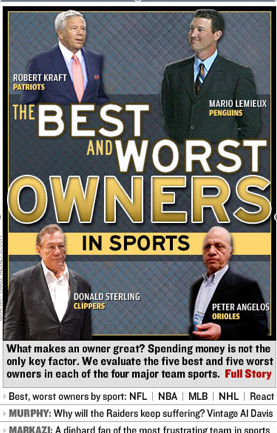 Finishing in the Top 5 is bad enough. The criteria SI.com set for judging the owners was described to me in the original email I received:

Well those first three kind of doomed DC, huh? The front office is stable now. But as I said, finishing in the Top 5 Worst is bad enough, but then you read the write-up that appears with each ranked team to explain their inclusion, and the last line of the paragraph on the Nationals is just stunning...After explaining that on the field, the Nationals are no better off than the Expos, which is certainly an arguable claim, the SI.com writers conclude that lack of onfield success is probably enough to earn the Nationals their place on the list, but:

"...then factor in the Esmailyn Gonzalez bonus-skimming scandal (which led to the firing of GM Jim Bowden) surrounding a Latin player who falsified his name and age while the execs and scouts stood to benefit, and you've got perhaps the biggest recent impropriety in baseball outside of the Steroid Era."

THE KIDS CALL IT THE STREAK...

Ryan Zimmerman's going for 30-straight tonight in San Francisco. The Nationals' Face of the Franchise©'s Hit Streak is the lead in Yahoo! Sports.com's Nationals Team Report, which quotes DC Manager Manny Acta, who makes our Federal Baseball.com official, "Hear Hear" quote of the day. According to the Yahoo! Sports report, Zimmerman's "...teammates and coaches are growing more and more impressed each day the streak's extended," and the Nationals' Manager is quoted stating:

"'It’s helping put him on the map and our organization in a positive note,' manager Manny Acta said. 'Hopefully he can continue to do it. But (it’s) most important that he does it while he continues to help us win ballgames.'"

(ed. note - "Hear Hear. And no, I'm not endorsing Mr. Acta's view just because he answered my questions on his blog. No, That's not the only reason.")

One More Reason For Optimism...

I got another note today about an MLB mock draft at MVN's MLB Outsider, where the good folks at the DC Pro Sports Report were representing the Mock Washington Nationals in making the first pick of the draft this afternoon...With the first pick of the draft, the Mock Nationals selected...Is there any doubt? San Diego State University starter Stephen Strasburg. Since I think the selection of Strasburg, at least, is a foregone conclusion, as oppposed the signing, I asked the MLB Outsider to let me know when the Nationals have made their second 1st Round pick, 10th overall. C'mon Crow!!!

For A Giants Fan's Perspective, (ed. note - "And one of the best blogs around.") Check Out the SBN's San Francisco Giants Blog:

No Strasburg Yet, (yells: "Or Crow!") But The Next Best Thing Is On The Mound...

Who's Watching The Nationals?