Federal Baseball.com Goes Behind The Scenes With MASN At The Nationals/Phillies Doubleheader.

Share All sharing options for: Federal Baseball.com Goes Behind The Scenes With MASN At The Nationals/Phillies Doubleheader. 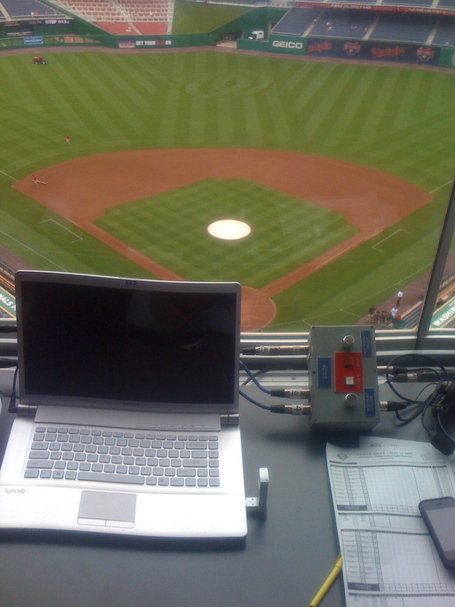 I spent the first half of today's day/night doubleheader, between the visiting Philadelphia Phillies and your Washington Nationals, amongst pretty much the entirety of the Natosphere, as guests of MASN, who invited the DC bloggers behind the scenes to meet all the TV personalities and get a look at how each MASN broadcast ends up on the airwaves, along the way introducing us all to the MASN broadcast team of Rob Dibble, Bob Carpenter, Ray Knight, Johnny Holliday and Debbie Taylor. I spent the second half of the Nationals/Phillies day/night double header amongst pretty much the entirety of the baseball, cheesesteak and beer-loving population of Philadelphia.

In the first of the two games, DC lefty Scott Olsen and Philly righty Brett Myers faced off on the mound, with Olsen allowing 9 hits, 3 HR's and 6 runs total, 5 earned, with 2 walks in 5.0 IP, while Myers held the Nationals to 2 runs on 3 hits and 2 walks, with 8 K's in 7.0 innings of the 8-5 Phillies' win. Raul Ibanez continued to blister DC pitchers, going 3 for 5 with 2 HR's and 5 RBI's. Ryan Zimmerman hit in his second straight game, finishing 2 for 4 with a run scored and 2 RBI's. 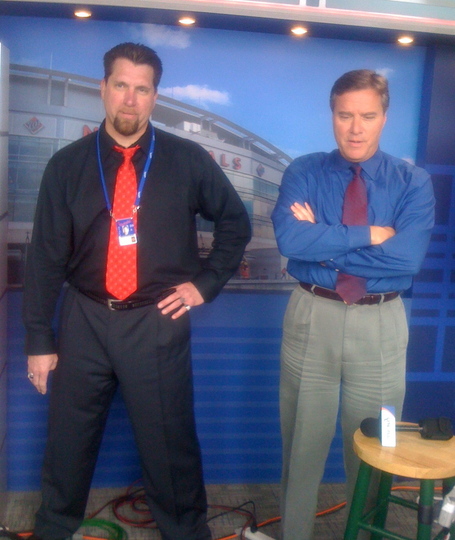 The good folks at MASN first brought the DC bloggers to meet MASN's play by play team of Rob Dibble and "Jinxing" Bob Carpenter, who graciously greeted and spoke to the bloggers about the process of calling the game correctly, and what role each played in the production. After meeting Mr.'s Dibble and Carpenter, MASN brought us to their suite on the third base side of home to watch the Nationals and Phillies play, at which point the (somewhat) opinionated writers and fans held court on all things DC baseball, effectively, I think, identifying and supplying answers for all the Nationals' problems whilst eating, drinking and taking in the day game.

• Scott Olsen's decreased velocity and the impending revelation of some sort of an injury. (ed. note - "After the game it was announced that Scott Olsen would be heading to the DL with what MLB.com's Bill Ladson, in an article entitled, "Nats expected to place Olsen on DL", described as "left shoulder tendinitis". Mr. Ladson also announced that '06 1st Round Pick Ross Detwiler would come up on Monday to make his first MLB start. 'Waaaht?'")

• The Former DC GM's role in putting together the current roster, and which, if any players would be dealt before the season ended. (ed. note - "Do the Nationals have the nerve to trade Dunn this summer if a good deal comes along from someone desperate to add a big bat.")

• Whether Nick Johnson will remain in DC or get traded, especially considering the fact that the best prospect at first, Chris Marrero is still young and a few seasons away from making an impact in the Majors. (ed. note - "I'll say it one, or two more times, Do Not Trade Nick Johnson.")

• Stephen Strasburg, Aaron Crow and the #10 pick of the '09 Draft. (ed. note - "Conclusions: The Nationals must sign Strasburg, should have signed Crow, had better sign the #10 pick, or else revolt!!!) (ed. note - "Alright, no one agreed to revolt, but I'll complain vociferously on this blog!") 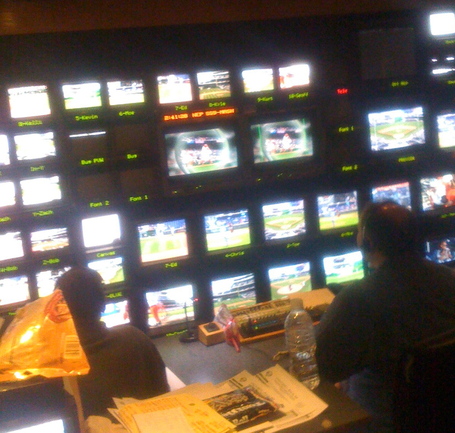 During the game, the bloggers were allowed, in a few small groups, to take a tour inside the MASN production truck, where we were able to watch the direction of the day game as it went live with the wall of monitors and army of desk- and laptops it takes to create every moment of the broadcast. (ed. note - "Highlights: I pretty much just watched the stream of X-Mo footage(slow-mo of the batters, pitchers) and watched the gentleman operating the pitch tracker, while wondering how much caffeine need be ingested to do this all 162 times a year.") 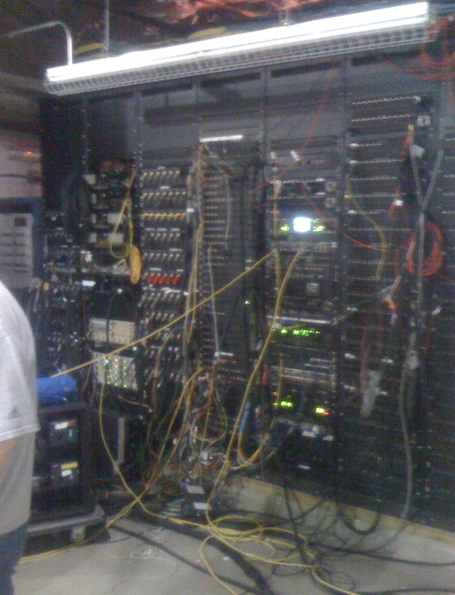 (ed. note - "Above is the first published photo of the Brain of Federal Baseball.com. Please don't touch the wires, they are carefully organized...")

The night half of the day/night doubleheader lasted just 6.0 long innings and saw DC righty Daniel Cabrera throw 107 pitches, 61 for strikes in 5.0 innings of work, during which he allowed 8 hits, 7 runs, 4 walks and 3 HR's while collecting 2 K's in a rain-shortened 7-5 Phillies' win. Philly threw emergency starter Andrew Carpenter, who went 4.1 innings and gave up 8 hits, 5 ER, 3 walks, while striking out 4 and receiving offensive support from Raul Ibanez, who topped off the 3 for 5 day with a 2 for 3 night, adding another HR and 3 more RBI's. Ryan Zimmerman's hit streak ended at two games when he went 0 for 1 with 2 walks, which keeps his on-base streak alive. Ronnie Belliard tripled and drove in a run, and TAWH, (Thee Amazing Willie Harris) did all he could, going 1 for 2 with 3 RBI's.

(ed. note - Thanks to Todd Webster, Kristen Hudak and everyone behind the scenes at MASN for recognizing the Natosphere, and having us all to the game.")

(ed. note - "Today's GameThread is scheduled to go up at 1:00 pm EST, before the 1:35 pm EST start of the Nationals/Phillies finale, Who's Watching The Nationals?")