As you all know by now, 2007 first round pick Ross Detwiler will make his first big league start tonight against the Pittsburgh Pirates. He replaced the injured Scott Olsen, hopefully for quite some time. The press release from the team is below the starting lineups.

Nats starter Jordan Zimmermann appeared at ESPNZone today at lunchtime for a fan Q&A, moderated by Charlie Slowes, play-by-play voice of the Nationals. He took fan questions, answered some canned questions from Charlie, and fans answered trivia for free tickets. 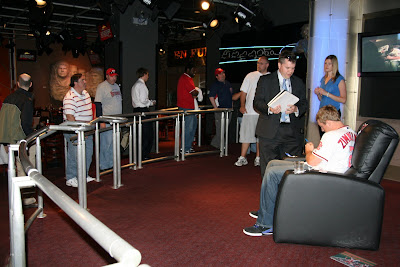 Detwiler is slated to make his first big-league start in tonight’s series opener against . The Nationals’ first-round (sixth overall) selection in the 2007 First-Year Player Draft, he started six contests and logged a team-best 28 strikeouts with a 2.96 ERA this season at Harrisburg. Detwiler posted a 1.20 ERA (2 ER) and 4.5/1 strikeout-to-walk ratio (18 K/4 BB) in 15.0 innings pitched during his last three starts.

The 23-year-old entered this season ranked the No. 2 prospect in the Nationals organization, per Baseball America. He made his big-league debut — a 1.0-inning relief appearance at Atlanta on September 7, 2007 — three months after he was drafted, becoming the first player from the ‘07 Draft to reach the majors. Detwiler has compiled a 10-13 record with a 4.34 ERA in 41 career minor league contests (40 starts). Olsen, 25, is 1-4 with a 7.24 ERA in eight starts this season with .