It's a rainy day. Our second home rain-out was another game I had tickets for, and I'm bored and trolling baseball-reference for random factoids.  Will we get rained out again?  Will I come up with anything interesting?  Odds are probably 50-50 on both.

The average age of Nationals hitters and pitchers (weighted by AB and games, respectively) has gone down every season:

The Nationals rotation and lineup have each gotten about 2 years younger since 05.  I imagine something similar must be true for the coaching staff, although I haven't looked up numbers for it.  Of course, younger doesn't always mean better. Remember any of these stiffs? 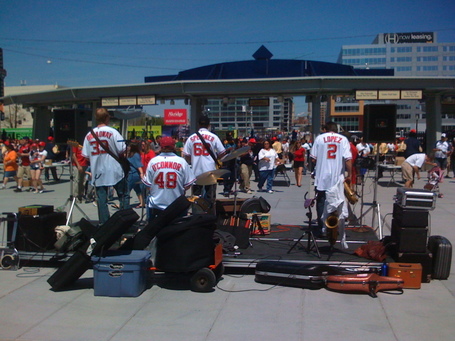 You can't make it out so clearly, but the #33 jersey?  That's right: Larry Broadway!

Every Nationals starters has an OPS+ of greater than 100, thanks to Elvis' hot streak (he's up to 101... although Guz has slumped down to 104 from his pre-DL OPS+ of around 150). Unfortunately, none of the current bench players has an OPS+ higher than 78 (TAWH... Hammer is managing a 47 with his limited playing time).  Team OPS+ is 100 as of yesterday, exactly league-average. 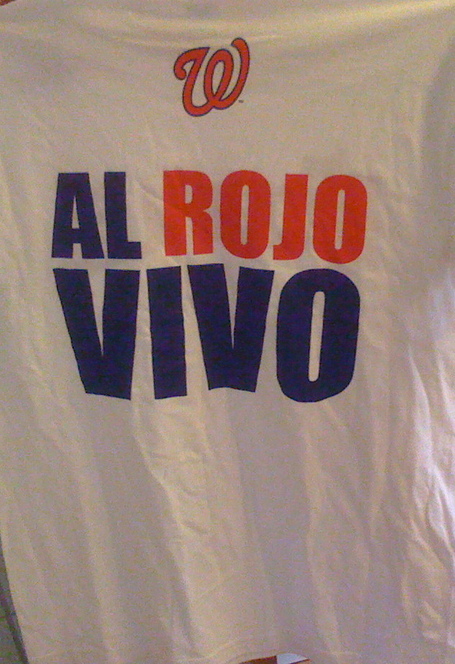 John Lannan is the only Nationals pitcher with an OPS+ greater than zero (yes, if you bat badly enough you can have a negative OPS+... it goes down to -100 for someone with an OPS of .000, which you usually only see for pitchers or Alex Cintron). "Cool Hand's" cool bat is good for a 31 OPS+, better than Josh Bard (19) and Lastings Milledge (6) combined.

We don't want a belly-itcher!

After his 6-K CGW, Smarty finally has more than one K per BB.  Lannan, Olsen, and Z(NN) are all striking out 6-7 per 9 IP.  Even including the relievers, the team is getting 6.1 Ks/9 IP.  Of course, the Duck Pond is walking every 8th batter, while the starters only walk about two-thirds as many.  Team ERA is down to 5.01, although our runs allowed per game has crept up to 5.70, which is now worse than even Fillie.  But there's hope for the future.  BBQ is coming to the Red Loft! 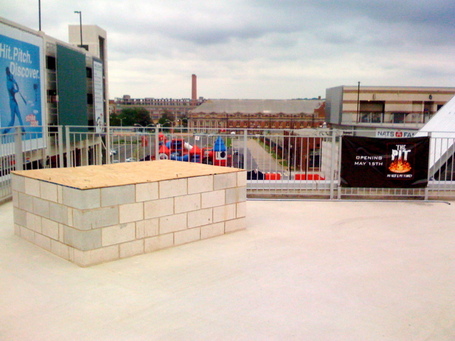 Opening May 18, with Pit Beef and Pit Turkey, for those of you who can't make out the writing on the banner.  It's between the Red Loft and the Scoreboard Walk.

Apparently not.  Nationals paid attendance so far this year is 218,877.  That's 14th in the NL, barely ahead of FLA's 212,967 (and they've played fewer home games).  Attendance per game is a partly 19,868, which is ahead of only Pittsburgh.  That's right, the Marlins have a higher paid attendance per game than we do.  If a fly ball drops in off of Dunn's glove and no one's there to boo, does it count as an error?  Here's a picture from Sunday's fantastic game.  There are more gaps in the stands than on the field! 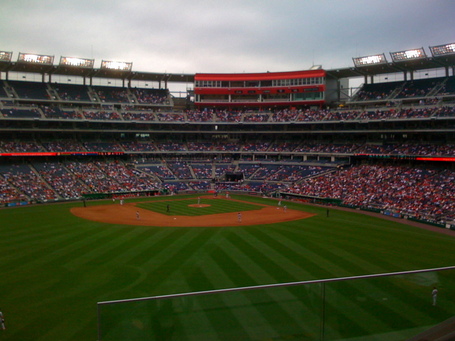 Find your own meaning in these statistical scraps. Then cross your fingers and hope for baseball tonight.