(ed. note - "Pt. 2 of the Federal Baseball.com Interview With The Washington Post's Chico Harlan will be posted at 1:00 pm EST.")

Shortly after the start of the broadcast of the 2009 MLB First-Year Player Draft began, the Commisioner of Major League Baseball, Bud Selig, sauntered out to the podium as a camera floated in from high above the collected representatives of each MLB team (who were seated at tables on the MLB Network's miniature ballpark set) to rest upon Mr. Selig's face:

(paraphrasing the following cause I was nervously pacing when I should have been typing):

"I'd like to announce that the Washington Nationals, who have the first pick in the 2009 MLB First-Year Player Draft, are now on the clock..."

graysnail - "John Hart talking about getting the first two picks next year.*You're not helping dude."

e chigliak - "You have to have a crowd, empty studio doesn't work..."

cat daddy3000 - "Let each team make their own announcement........and yeah, have an audience...We are apparently interrupting Selig's dinner..."

Mr. Selig was back in frame: (paraphrasing now, cause I was laughing...)

Before the scheduled Strasbur--starting time for the first of three with Cincinnati tonight in Nationals Park, it was announced that the beginning of the game would be delayed, and while the rain passed over the Navy Yard on the Anacostia, "Acting" DC GM Mike Rizzo and the members of the Nationals' Brass who were not preparing for the night's game were preparing to make the 10th pick in the '09 Draft, which they used to select Stanford right-hander Drew Storen, who's described by ESPN's Keith Law, in his ESPN.com Insider video entitled, "Insider: Keith Law scouts Drew Storen", as having a:

Storen, who roomed with DC pitching prospect Jack McGeary at Stanford, said during an interview on the MASN broadcast, or at least I could've sworn I heard him say, that he was once a bat boy for the Montreal Expos. MLB.com's Bill Ladson's article entitled, "Nats add more pitching in first round", quotes the "Acting" DC GM Mike Rizzo saying that the former Cardinals' closer has, "...two plus pitches and a developing changeup," which Mr. Rizzo believes gives him, "the repetoire to start," but:

"...we are going to keep him in the bullpen role. That is where he is most comfortable. His makeup and character led us to that decision."

The Washington Nationals and Cincinnati Reds took the field in Nationals Park. DC lefty Ross Detwiler was a late replacement for Jordan Zimmermann, who bowed out with what Washington Post writer Chico Harlan described vaguely, necessarily of course, in a Nationals Journal post entitled, "Zimmermann, Willingham, Lineups", as, "some elbow soreness." (ed. note - "Don't panic just yet, DC Faithful.") According to Mr. Harlan, Zimmermann's, "...just skipping one turn in the rotation." Detwiler took on the Reds tonight, and allowed 3 runs on 5 hits in 6.0 IP, with 6 K's and 3 walks, suffering his 3rd loss of the season, (L,0-3) when the Nationals couldn't overcome a two-run Reds' fifth, in which a leadoff double, one-out walk, two-out walk and a two-out double by Brandon Phillips scored Cincy SS Alex Gonzalez, who'd doubled to start the frame and scored, and Reds' pitcher Johnny Cueto, who had walked, and scored on Gonzalez's two-out hit, for what would eventually be the winning run.

Sometime earlier this afternoon I agreed to appear on RBI Sports Radio with Joe Hayward to discuss the Nationals' selection of SDSU's Stephen Strasburg with the No.1 overall pick. What follows is what I'd described as, "bombing like the early '09 Nationals' bullpen". I think what threw me was Mr. Hayward's question about Peter Angelos' entanglements with the Washington Nationals and the agreement that was reached to allow the Expos into the nation's capital, which took place five years ago, and so had me searching my memory of the events as I tried to decided whether or not what Mr. Hayward was saying was in fact true...Shortly after that, at the conclusion of the interview, Mr. Hayward asks simply, "If you had to sum up the drafting of Stasburg in one word what would it be, Ed?" To which I responded, "One word...?...(awkward silence)...(more silence)...how about a hyphenated word, 'forward-thinking', it's going to set us up for the future, finally..." (ed. note - "...ugh...enjoy, it's cringeworthy...")

2 hours and 49 minutes after it started, following a 1 hour 47 minute rain delay, the first of three between the visiting Cincinnati Reds and the Washington Nationals ended when Austin Kearns was called out on strikes by an umpire who had, the previous inning, called Adam Dunn out on a full-count slider from Reds' lefty "The Great" Arthur Rhodes, which MLB's GameDay has generously placed at least close to the strike zone... 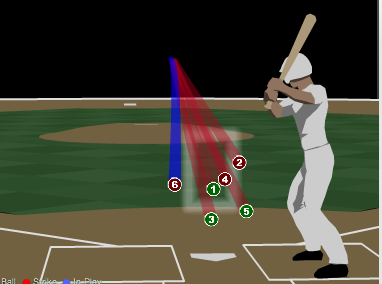 Adam Dunn wasn't happy with home plate ump Andy Fletcher's call, but he just voiced his displeasure after K'ing with one-out and Ryan Zimmerman at second in the eighth. When Austin Kearns K'd however, the Nationals came unglued. Kearns turned and confronted the ump, Manny Acta stepped into to hold his player back, and DC Hitting Coach Rick "Teh Geenyus" Eckstein could be heard shouting from in front of the dugout, "You've got no integrity, none...," and Mr. Eckstein said it a few times as the game ended with the entire Nationals' bench enraged. Keep calling them the "Washington Generals", "the jokes of baseball", the "lowly Nationals", go ahead...They're starting to get angry. They're all starting to get a little of the RV in them.

• After Ross Detwiler's, 6.0 innings of work, Jason Bergmann, Ron Villone, (affectionately known here as "VILL0.00NE"), and Mike MacDougal combined for three scroreless frames, keeping DC within one though they were not able to come back completely."

• * = Mr. Hart is assuming here that the Nationals will finish last in the majors again, thus earning themselves their second straight #1 overall pick, and if they somehow, catastrophically, fail to sign Strasburg, the second pick of the 2010 First-year draft as well...

Miss The Game? Or The Draft? The DC Faithfull Were Wathing...

See How The Folks At Red Reporter Saw It...(ed. note - "Their post game is written by Brendanukkah, who has posted at Federal Baseball before.")