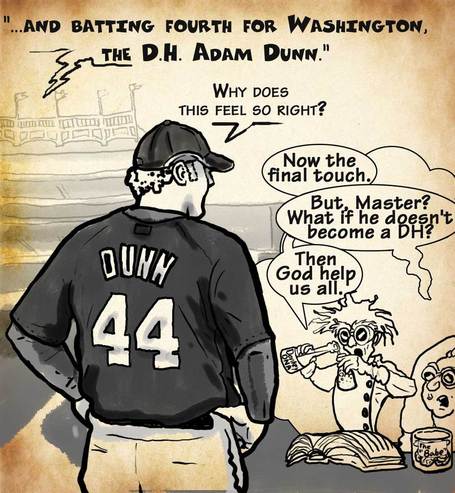 (Adam Du-- SHAKE N BAKE!! SHAKE N BAKE!!! Adam Dunn hits SOLO SHOT to right off Chien-Ming Wang in the fourth that's up there long enough for everyone to watch it...1-0 DC over New York's Yankees, and Nick Johnson hits a two-run triple to center that a diving Melky Cabrera can't come up with, 3-0 ballgame in the fifth, make that 3-1, Robinson Cano's HR in the fifth is theYankees' first hit, 3-1 DC, and after eight and a half, John Lannan's still holding onto the same lead...)

John Lannan comes back out for the ninth, looking for a complete game win over the New York Yankees. The first pitch of the frame is a fastball, in at 89 mph for a called strike on the Yanks' left-handed hitting left fielder, the weak-armed Johnny Damon. Ball one, outside, Lannan misses the outside corner low and away, and Damon lays off, knowing it's one more in a night of 15 Yankee groundouts. Damon made a good choice, and Lannan makes his second mistake of the night, 1-1 fastball down the middle and up and it's launched to right and GONE, first row, 3-2 Nationals, and Jon Sterling does one of his trademark home run calls. (What does he say for Damon? I don't even listen to AL baseball..."). DC Manager Manny Acta leaves Lannan in...Nick Swisher takes a first pitch fastball to left and NO...Sorry, New York...Willie Harris catches it 20 feet from the track, as in, not close. The Nationals' 24-year-old lefty pounds Mark Teixeira with fastballs inside, and then tries for the outside corner low and gives up a single, John Lannan's done...

...Manny Acta turns to Mike MacDougal...who'll be trying for his first save since July 16th 2006. 3-2 Nationals. One out in the ninth, MacDougal up, Brett Gardner on to run for Teixeira. McDougal keeps throwing to first, but Gardner still takes off, and the Nationals are on it, pitch out, but the throw's high, Gardner slides in safe at second just beating the tag. The NY3B up at bat...and Gardner takes third! The NY3B walks. First and third one out...Mike MacDougal vs Robinson Cano...For NINE PITCHES...MacDougal's up 0-2 early on two fouls and he has to throw NINE more pitches, all fastballs on the low outside corner of the zone to the lefty, and Cano keeps...fouling...them...off...before finally grounding to Cristian Guzman who tosses cooly to Anderson Hernandez to Nick Johnson, DOUBLE PLAY TO END IT!!! THE NATIONALS WIN!!! THAAAAAAAAAAAAAAA NATIONALS WIN!!!!!!!!!!!!!!

HEADLINES: (continued After The Jump...)

Miss The Game? The DC Faithful Were Watching From The Edges Of Our Seats...

For The Completists, Complete Game Report After The Jump...

The Yankees' right-handed sinker-baller Chien-Ming Wang was fighting for his starting spot after struggling upon returning to the NY rotation following a DL stint spent rehabbing an his hip. Through three scoreless, Wang was hanging with John Lannan, but Adam Dunn stepped to the plate in the top half of the fourth and turned a 3-0 fastball from Wang around, unloading on a 93 mph fastball for a majestic shot that sailed through the cool New York air for one seemed like a lifetime, falling from the third deck into the hands of a lucky fan who probably wishes he hadn't caught it all the way out there!!! Adam Dunn's 18th is a sweet one, and he's got 46 RBI's in 64 games, a .393 OBP, .536 SLG, a (whispers) .259 AVG, 8 doubles, 51 walks and 69 K's...

John "Cool Hand" Lannan, Long Beach, NY's favorite lefty, one-time Siena Saint, and currently a 24-year-old staff ace in DC, throws four hitless against the New York Yankees in the new Yankee Stadium before giving up a HR to Robinson Cano in the fifth, and Lannan ends up going 8.1 IP, allowing just 4 hits and 2 ER, on 2 HR's. 108 pitches, 17 for strikes, 15 groundouts, 6 fly ball outs and 4 K's. Lannan leaves the game with one down in the ninth after surrendering a solo shot to cut his 3-1 lead in half, and then Lannan watches from the bench as DC Closer Mike MacDougal locks down Lannan's 4th win of '09. Lannan now, (W, 3-4, 3.38 ERA).

Robinson Cano backhands a grounder up the middle from Cristian Guzman and throws from the hip for Chien-Ming Wang’s first out of the night. Nick Johnson works the count like a leadoff hitter, and walks on a full-count fastball up high. Chien-Ming Wang’s a ground ball pitcher, and he gets one for Zimmerman to short, Ramiro Pena to Robinson Cano to Mark Teixeira, double play...Johhny Damon’s bat barrel gets as far as his groundout to second, John Lannan saws off the Yankees’ leadoff hitter. Nick Swisher swings at the first pitch he sees, and hits it back to the mound, Lannan snaps his glove at it and throws to first. Two close calls on pitches outside go Mark Teixeira’s way and he walks. Lanna gets the NY3B looking with a 2-2 fastball inside at 90mph.

Adam Dunn takes a few pitches, takes a few cuts and eventually lines a 3-2 pitch to Nick Swisher. Elijah Dukes backs the NY3B up a few steps, but he throws to first in time. Corey Patterson K’s swinging over a slider in the dirt, and takes first when Jorge Posada misses the pitch too. Josh Bard grounds weakly to Ramiro Pena at short....Cristian Guzman fields (and bobbles) and throws to first. Jorge Posada chops down on a change outside and grounds back to the mound, Lannan fields, steps and throws. Hideki Matsui takes fastball outside for a ride to short left, Willie Harris has it, Lannan through two.

Robinson Cano throws on the run to get Willie Harris. Anderson Hernandez gets a hard breaking ball inside and he K’s swinging. Cristian Guzman beats a diving Cano to the hole at second. The NY3B cuts Nick Johnson’s grounder off in front of short and throws to first to end the Nationals’ third...Elijah Dukes sprints to get under Robinson Cano’s flyout to right. Ramiro Pena swings over a two-strike bender that drops inside and out of thin air. Again with the bat barrel flying and again a groundout, Lannan retires Damon for his third scoreless.

2-2 slider down the middle, and Chien-Ming Wang gets it under Ryan Zimmerman’s bat. Adam Du---SHAKE N BAKE!!! SHAKE N BAKE!!! Adam Dunn’s swinging 3-0 and he launches a HR to right that’s so high everyone has time to admire it. Elijah Dukes chases ball four and K’s on a full-count slider outside and away. Corey Patterson gets a single by Cano into right, but Josh Bard’s groundout to first ends DC’s fourth...Nick Swisher rips a line drive right into Zimmerman’s glove. Mark Teixeira rocks back in forth in time with his bat and grounds out to short for the second out of the NY fourth. NY3B grounds back to the mound, Lannan’s through four scoreless.

Willie Harris lines a singles over second to start the fifth and steals second with Anderson Hernandez at bat. Ramiro Pena leaps to get to a line drive from Hernandez. Cristian Guzman beats out a sharp grounder to the NY3B. Two on, one out for Two-Spot. Melky Cabrera dives for a line drive off Nick Johnson’s bat and comes up empty!! Sinker outside lined to left center and to the wall, two runs score on a Nick Johnson Trademark Triple! NJ3B™, 3-0 Nationals!! Ryan Zimmerman grounds out to the NY3B, Johnson gets back to third, Zimmerman gets thrown out. Adam Dunn up with Johnson still on third. Dunn walks, Dukes grounds out to short to end the DC fifth...Robinson Cano gets a hanging 2-2 curve and hits it into the right field stands, 3-1 Nationals. Anderson Hernandez is behind second waiting for Jorge Posada’s groundout. Lannan breaks another bat, snapping Matsui’s stick in half and getting a groundout to second. Cristian Guzman throws Melky Cabrera out to end the fifth.

Corey Patterson vs Phil Hughes to start the sixth. Patterson K’s swinging on an 0-2 curve outside. Josh Bard hits a liner into Mark Teixeira’s gut at first, Bard out at first. Willie Harris flies out to right center, John Lannan heads back to the mound...Nick Johnson closes his glove on a liner from Ramiro Pena. Johnny Damon beats Nick Johnson to the first base line, and comes in standing up at second when the ball bounces on Dukes. Nick Swisher takes a two-strike fastball for a called strike three. Lannan gets a weak grounder to second out of Tex for the final out of the sixth.

Anderson Hernandez grounds out to Not-Jeter for the first out of the seventh. Cristian Guzman pulls up as he rounds first, and settles for a single to right with one down. Mark Teixeira shows off his glove alligator-arming a sharp grounder from Nick Johnson that jumps up at him as he dives and Tex throws to second after stepping on first, too late for the DP though. Ryan Zimmerman K’s looking at a 3-2 bender over the middle. Not nice, Hughes...Ryan Zimmerman charges, fields and throws out the NY3B. Robinson Cano hits a high-hopper to second, Anderson Hernandez handles it!!! Jorge Posada grounds to first, Nick gets dirty, gets it and tosses to first.

Adam Dunn starts the eighth at the plate against lefty Phil Coke. Dunn K’s swinging. Elijah Dukes takes a 3-2 pitch from Coke, and takes a base. Corey Patterson K’s swinging over a two-strike slider that drops off the outside of the plate. Josh Bard’s hitting from the right side against the lefty, Coke. Bard gets a 1-2 bender inside and can’t hold back, strike three to end the top of the frame...Lannan’s back out in the eighth and he’s got one down after Matsui flies to Willie Harris in left. Melky Cabrera gets punched out on a cut fastball inside. Ramiro Pena grounds to second, Anderson Hernandez has it jump into his gut, but he makes the play to get Lannan through the eighth with the lead.

Willie Harris grounds out to second, and Phil Coke’s out, Alfredo Aceves in, and Anderson Hernandez lines the first pitch to right center, Melky Cabrera catches it. Cristian Guzman grounds weakly to Cano, and Lannan’s heading back out...Johnny Damon takes a 1-1 pitch to the first row in right, GONE!! HR for Damon. 3-2 game. Nick Swisher flies out to Willie Harris in left. Mark Teixeira singles through short to bring the NY3B to the plate. Acta pulls Lannan. Mike MacDougal comes on. Brett Gardner runs for Teixeira. Gardner steals second on a pitch out, and steals third on a pitch in the dirt. 3-2 pitch low, the NY3B walks. Robinson Cano battles for what seems like an hour and finally grounds to short, Guzman to Anderson Hernandez to Nick Johnson at first!!! DOUBLE PLAY TO END IT !!!! THAAAAAAAAAAAAA NATIONALS WIN!!! THAAAAAAAAAAAAAAAAAAAAAAAAAA NATIONALS WIN!!!!!  Nationals win, 3-2 final.