• Listen to the audio while you read...

(ed. note - "I summed up the questions briefly, with all apologies to the bloggers who asked them because it was the answers that are of interest, and I can't identify all the various bloggers' voices...the answers are verbatim from the audio I recorded...")

Q: What's The Biggest Thing That's Surprised You About DC?

"What's surprised me is not good. It's how we played. That, that surprises me."

"I think we've played defense and pitched well, I think that's what you have to do to win, and if we continue to do that, I think, we can play good for the rest of the season. We, uh, you know we made some errors last night. But, I mean overall the last week or two we've played some good defense and made the plays when we've needed to."

Q: Young pitchers? How gratifying is it to see others behind you come up? 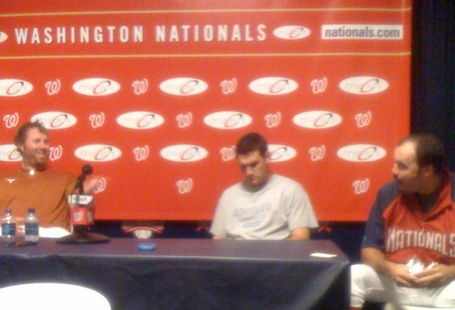 Q: Strike zone command and plate discipline. A lot of people talk about it being patience, but I think it's a skill, what allows you two in particular to do be able to lay off bad pitches and swing at only the pitches you want, not chase? (ed. note - "So you understand the humor here, Nick Johnson said he was just here to watch, wouldn't be fielding questions, so of course Mr. Dunn starts...")

"Ohhh God. I don't know, I mean, I really don't how...I mean...it's, sometimes it's really good and sometimes it's bad, um, I think sometimes, I think what Nick was trying to say, was, uh, you know we're too patient sometimes, I think we get pitches early in the count and, you know, we don't take advantage of it and then we have to hit their pitch and therefore I strike out 200 times, so, um, but you know, that's something I'm trying to work on, is when I do get a good pitch early in the count, you know, walks are good, but there's a lot times where you have a lot of bad walks, and, uh, what I mean by that is you get, you know, you'll get a pitch to hit early in the count with, you know, guys in scoring position or something and you take it but, yet you get a walk, but, you know to me that's a bad walk, so, uh, you know, it is good, but it's again, it's, I mean, basically take the good with the bad, I don't, I wouldn't sit here and say I like walking, but it just happens..." 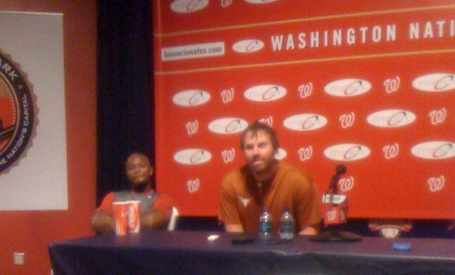 Q: Will Willie Harris answer questions? (Someone (Dunn) responds, "Heck yeah he will.")

Q: Couple good plays recently, you always seem to have such a great attitude. How do you always stay so positive and upbeat?

"Mainly because I know I'm gonna have way more good days than I am bad days and guys feed off of that type of stuff, I mean, even when you're not playing so well like I am right now, not getting a whole lot of hits*, but a lot the younger guys, Anderson and Alberto, those guys are here and they're looking, so you have to kind of stay positive and keep everybody upbeat. I mean, I don't want to go around pouting and it will rub off on everyone else, so I just try to stay positive, play the game hard all the time, play the game right, and if you're doing all that, the game will give back to you eventually."

Q: To Dunn: Do you think the disappointment you spoke about earlier can be turned around?

"Well, I think it's, first of all, I didn't expect that we would come out and be, you know, play as bad as we have. I mean, we've got, I know everyone says it, but we have a lot better team than what we've shown. And, uh, I think now you're starting to see that, I think now you're starting to see our young pitching come together, you know, we're playing a lot better defense, and uh, you know, I mean, we've played, the last five or six games we've played pretty good, the last two weeks, really, we played really good baseball so, um, you know, I think that's definitely a bright spot. And, you know, our second half is going to be really good. I mean, I really, really believe we're going to have a really good second half, because, you know, our young pitching is, obviously coming along, and uh, if we stay healthy I think, you know, our second half, nobody wants to play us now, I mean there's nobody that wants to play us right now, and we s...you know, we've got the worst record in baseball, so, you know we'll, it'll turn around..."

Q: Does it bother you when others make fun of the team and what you're doing?

Q: What was it like in the clubhouse after the wins against the NY Yankees?

Any time we get a win, you know it's great. But, uh, I think a lot of people are making a big deal out of it, just because of who we played. You know, it's still, you still gotta play baseball, I mean, it doesn't matter if you play the Yankees or whoever, a win's a win, so I just think it was just magnified because it was the Yankees, and it was at their place.

Q: I just had a question for Adam, one of the readers on my site wanted to know if you'd changed your hitting approach, at all, we noticed you hitting a lot more singles and opposite field?

"Yeah, I was uh, yeah, I've been working on that a lot, trying to hit, you know, a lot more singles this year and, um, you know, just trying to slap the ball to left, and things like that, you know try to use my speed game more...HECK NO, MAN!! (LAUGHTER)...Nah, you know, I don't know I think, it's a lot of little mechanical things, and you kind of work on and continue to work on, and just kinda allowing me to uh, you know, do that, I'm not trying to hit singles."

Q: What do you do during rain delays?

What do we do, Nick?

I am not, Nick Johnson is.

Q: Yeah, I know, he didn't approve my friend request.

Huh? He approved it?

He didn't? (to Nick Johnson) NICK? Ryan is too, so he'll approve you.

Q: Is there a particular stadium you don't want to play in?

"Mine's Cleveland. I feel, some parks you feel awkward in, you'll feel crooked and this and that. Cleveland's mine."