MASN's Washington Nationals Analyst Rob Dibble and ESPN writer Rob Neyer had a rather mean-spirited indirect argument over the internets last night as Mr. Dibble responded to Mr. Neyer's article at ESPN.com entitled, "Nats, Dunn can't fight City Hall", in which Mr. Neyer quotes the transcript of Rob Dibble and Bob Carpenter's call of Adam Dunn's bases loaded backwards K near the end of Randy Johnson's 300th win, and comments on the call on the field and in the broadcast booth...

Dibble and Carpenter both originally questioned the call and wondered aloud if Randy Johnson's milestone victory wasn't being ushered along by the home plate umpire in what admittedly sounds a little like the defensive tone that most of the Nationals blogs have taken in response to the sort of sentiments that the entire baseball world, as exemplified here by Mr. Neyer, expresses in just about every article about the DC franchise, as Mr. Neyer takes a moment in his article to call the Nationals, "...the biggest joke in the game."

Mr. Dibble argued, during the broadcast, that the strike, which he refers to as a "knee strike", isn't called anymore by umpires, and he went on to say that the umpire, "...can't just call strikes because a guy is going for his 300th victory," but Mr. Neyer counters that most pitch trackers determined that the pitch was indeed a strike, and writes that as close as the call was, with the evidence before them, and knowing Dunn's willingness to take a walk when he can...:

"There simply wasn't any (good) reason for anyone in the dugout -- of for that matter, the broadcast booth -- to get worked up over a borderline pitch that was quite possibly called correctly."

-- Here's how it the pitch (6) looked on MLB.com's Gameday, and to be honest, my original reaction was that it was a strike or at the very least, in a full count, too close for Dunn to take: 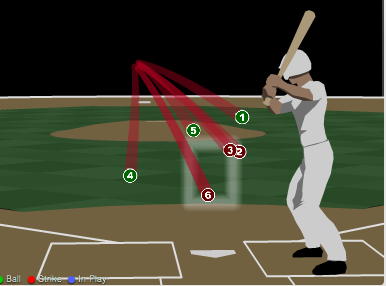 -- And here''s Pitch F/X data, which again finds that the pitch was a strike.

-- But, here's what Mr. Dibble, Mr. Carpenter and anyone watching on MASN saw, as captured in a screencap by Bugs and Cranks' writer Mark Townsend:

Mr. Neyer's article then turns somewhat personal as he recounts his opinion of Mr. Dibble's post-baseball career in broadcasting, in a way that's slightly uncomfortable, barbed as it is with the usual complaints about Mr. Dibble, as when Mr. Neyer writes that the former Cincy Reds' reliever, "...is still a blowhard who believes that if you didn't play the game you don't know anything about it," and also notes that Mr. Dibble, "...is smarter than you probably think."

"It's funny to have college dropout Rob Neyer transcribe MASN broadcasts*, hey Rob, I've got a leaky roof, can you come over and fix it? lol"

"The fact that Neyer and Keith Law have HOF votes proves writers should no longer have the right to vote..."

(ed. note - "Anyone else just get really uncomfortable? These guys know this stuff is out there for everyone to read, right? I mean they're really just trading cliched personal insults with one another.  Note: * = the transcript Mr. Neyer cites with the quotes from the MASN broadcast was actually transcribed by Bugs and Cranks' writer Mark Townsend in a post which used Dibble's quote as a title, "Rob Dibble: You just can't call strikes because a guy is going for his 300th victory". So, uh...anyone want to talk about Stephen Strasburg?)