26,855 Pittsburgh Pirates fans* got a glimpse of the future tonight as 22-year-old center fielder Andrew McCutchen hit 3 HR's off 3 different Nationals' pitchers, taking DC starter Craig Stammen to center for a leadoff blast in the first, and following it up with a two-run HR in the fifth off Tyler Clippard, and a 3-run blast off Logan Kensing in the sixth to make it 11-4 Pirates in what ends up an 11-6 win. Stammen can't get out of the fourth. The 25-year-old righty gives up 9 hits, 2 walks and 6 earned runs in 3.0 IP, throwing just 44 pitches, 30 for strikes and surrendering a double, a triple, a HR and 3 singles in his short time on the hill.

The Pirates' center fielder, McCutchen took a curtain call after his third HR, but ground out in his last AB with the whole crowd thinking four. 4 for 5 with 4 runs scored and 6 RBI's on the night, McCutchen's now hitting .293 with 14 doubles, 5 triples, 6 HR's, 33 RBI's and 9 stolen bases in 50 games played...the Nationals combine for 12 hits and 6 runs of their own, with Ryan Zimmerman (3 for 4, 1 RBI), Cristian Guzman (2 for 5, 1 RBI) and Nyjer Morgan (3 for 5), providing the bulk of the Nationals' offense while the middle of the Nationals' lineup (A. Dunn, J. Willingham and Elijah Dukes) were a combined 1 for 9.

(ed. note - " * = Pirates AVG attendance = 19,167, so with a concert after the game, I'm estimating approximately 7,688 of those in attendance were treated to a show by McCutchen as they waited for the Jo Dee Messina concert.")

Miss The Game? The Frustrated DC Faithful Were Watching...

For The Completists, Full Game Report After The JUMP... 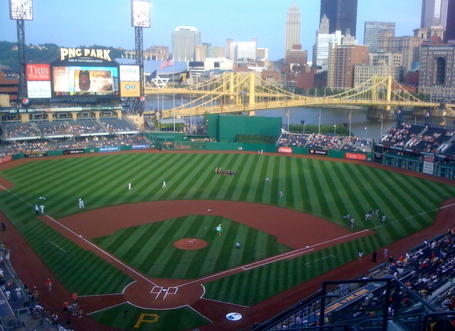 (photo by Doghouse, sent via iPhone)

With the game tied at 8-8 after nine, the Florida Marlins and Chicago Cubs were in extra innings in Nick Johnson's Marlins' debut at the time this post went up. Wearing #20 and batting second in front of Marlins' shortstop Hanley Ramirez (who was injured in the game), Nick JOhnson went 2 for 3 with a run scored and 2 walks in front of the Florida fans in Land Shark Stadium. Johnson arrived at the park this morning after flying to Florida late last night, and he told MLB.com writer David Villavicencio, in an article entitled, "Johnson joins Marlins, excited to compete", about his time in DC and his excitement about the Marlins' playoff possibilities, "'It was tough,' Johnson said of his time with the Nationals. 'In Washington, we didn't win a lot of games...'":

"'I haven't been in something like this in a while. I'm really excited about it and I'll enjoy it. I've come to a team that has a chance to win, and that's what you play for. You don't play for .500 ball.'"

The Norfolk Tides scored runs in the bottom of the eighth for an 8-6 win over the Syracuse Chiefs (AAA) Saturday night. Chiefs' center fielder Justin Maxwell was 2 for 4 with 2 runs scored in the losing effort, and RF Kory Casto finished the nigth 3 for 4 with a HR and 5 RBI's...The Harrisburg Senators (AA) beat the Portland Sea Dogs Saturday with former P-Nats' pitcher Jeff Mandel improving to (2-0) since making the jump to Double-A. Sean Rooney, who was tearing up Carolina League pitching with Potomac is 11 for 33 in his first 11 games with the Senators after going 1 for 3 with an RBI in the win. RHP Clint Everts closed out the win for his 3rd save as a Senator...The Winston-Salem Dash shut the Potomac Nationals (Class A) out Saturday, taking a 5-0 victory on the road in Pfitzner Stadium. P-Nats' left fielder Jesus Valdez was 3 for 4 with 3 of the 4 P-Nats' hits...The Hagerstown Suns (Class A) dropped a 2-1 10-inning affair against to the West Virginia Power. Suns' starter Paul Demny allowed just 1 run in 5.1 IP in the loss...The Vermont Lake Monsters (NY/Penn) took an 8-3 decision over the Lowell Spinners Saturday. DC's '08 2nd Round pick Destin Hood was in RF for the Lake Monsters, and he finished the game 1 for 5 with a run scored and 1 RBI...

This has been your Minor League Minute...

Nyjer Morgan pops up a bunt attempt and Bucs’ backstop Ryan Doumit sprints down the first base line to make the grab. Pirates’ righty Virgil Vasquez on the hill in PNC, Cristian Guzman and Ryan Zimmerman single in succession, both up the middle and Guzman’s on third when Adam Dunn steps in. Dunn goes opposite field and into the corner with a fly. Lastings Milledge has to sprint from left center. He can’t get there. Milledge drops it. Guzman scores, 1-0 DC. Josh Willingham takes one on the elbow. Elijah Dukes works the count, fouls off a few and flies out to center, Zimmerman tags and scores, 2-0 DC. Bard flies out to Brandon Moss to strand two, 2-0...Craig Stammen gives up a long fly ball to left that won’t come down, Josh Willingham leaps at the wall but comes up empty, Andrew McCutchen homers to start the bottom of the first. 2-1 DC. Lastings Milledge flies out to Nyjer Morgan. Garrett Jones takes a 1-2 fastball outside to center for a single. Ryan Doumit grounds to short, Guzman to Anderson Hernandez to Adam Dunn, double play.

Alberto Gonzalez pops out foul of first. Stammen K’s swinging. Virgil Vasquez looking for a quick frame. Nyjer Morgan sends a chopper up the middle for a two-out single. Cristian Guzman grounds sharply to first with Morgan running, but Garrett Jones makes the play...Delwyn Young grounds out to Alberto Gonzalez at second. Andy LaRoche pops out behind short. Brandon Ross pops up to the infield, Zimmerman closes his glove on the second.

Ryan Zimmerman singles through short to Milledge in left. Adam Dunn walks to put two on for Willingham. Hammer pops out. Elijah Dukes grounds to short, Ronny Cedeno to Delwyn Young to Garrett Jones, double play...Ronny Cedeno rips a single through short to start the Pirates’ third. Adam Dunn fields and throws into the basepath on a bunt by the pitcher. Andrew McCutchen drops a swinging bunt down and beats the throw to first. Cedeno takes third. Lastings Milledge drills a line drive to left and to the wall, Cedeno scores, McCutchen’s around third and home before the throw in reaches the infield. 3-2 Pirates. Garrett Jones flies to deep right center, Elijah Dukes tracks it and makes the catch as he hits the wall!!! DUKES!!! Ryan Doumit grounds to first, Adam Dunn makes a nice backhand play and toss to Stammen covering.

Josh Bard singles to center to start the fourth. McCutchen goes back to the track to catch Alberto Gonzalez’s flyout. Craig Stammen flies out to Moss in right. Cristian Guzman grounds to short, Cedeno pumps toward second then fires to first, in time...Delwyn Young smacks a low liner up the middle and off Stammen’s foot. Andy LaRoche flies to deeep center and off the wall in spite of Nyjer Morgan’s effort. Delwyn Young scores, LaRoche takes third. 4-2 Pirates. Brandon Moss lines to short center, Nyjer Morgan dives in and misses. Morgan throws home to try for LaRoche, but it’s wide of home and he gets an error. Moss to second. 5-2 Pirates. Tyler Clippard takes over for Stammen. Ronny Cedeno chops an infield single over the mound. Moss to third. Virgil Vasquez pops up a bunt, Alberto Gonzalez charges in to make the catch and the throw to first for a DP. Andrew McCutchen takes Clippard deeep to left and just out into the first row, 2-run HR, 7-2 Pirates. Milledge pops out to end the Pirates’ fourth.

Ryan Zimmerman lines a double to left and it's to the wall before Milledge gets there. Adam Dunn K’s swinging. Josh Willingham walks on four straight. Elijah Dukes flies out to Milledge in left. Josh Bard knocks Zimmerman in with a line drive over Brandon Moss’ head in right, 7-3 Pittsburgh. Alberto Gonzalez lines out to end the inning...Elijah Dukes takes a few steps back to catch a fly ball off Garrett Jones’ bat. Ryan Doumit K’s trying to lay off a sinker in the dirt from Clippard. Delwyn Young chases a fastball up and out of the zone to end the fifth.

Jeff Karstens is on for Pittsburgh. Ramon Vazquez in at second. Anderson Hernandez doubles over Moss’ head in right to start the sixth. Nyjer Morgan "lines" a bunt toward short and beats out the throw to first. Hernandez to third. Cristian Guzman lines to left and just inside the line, Hernandez scores. 7-4 Pirates. Second and third for Zimmerman. Zimmerman lines out to right, Moss throws a laser home to hold Morgan at third. Adam Dunn swings over a two-strike change outside. Josh Willingham tears into a fastball and lines right- into Ramon Vazquez’s glove at second. Willingham’s robbed. 7-4 Pirates after five and a half...Andy LaRoche lines to left off new DC righty Logan Kensing. Brandon Moss sneaks a hard hit grounder under a diving Dunn at first. Dukes throws to third trying for LaRoche, but it’s late. Ronny Cedeno grounds to second to score LaRoche, 8-4 Pirates. Kensing walks Ramon Vazquez. Andrew McCutchen flies to deeeeep left and GONE!! 3-run HR. 11-4 Pirates. Ron Villong on in relief. Milledge flies out for the second out. Garrett Jones hits a fly ball to left, and Willie Harris misses when he dives. Ryan Doumit flies out to end the sixth.

Jeff Karstens vs Dukes in the seventh. Dukes down swinging at a two-strike change outside. Bard grounds back to the mound. Weak grounder to short from Alberto Gonzalez and it’s 11-4 Pirates in the seventh...Ron Villone gets Steven Pearce and Andy LaRoche swinging to start the frame. Villone saws off Moss and gets a pop out to the infield.

Austin Kearns leads off the ninth against Evan Meek, who throws four balls. Elijah Dukes walks. Josh Bard gets punched out on a two-strike bender outside. Alberto Gonzalez up. Wild pitch advances both runners. Gonzalez grounds out to short, Kearns scores. 11-6. Willie Harris grounds out to first, and DC drops two-straight to the Pirates.