Josh Willingham's 2-run HR in the 7th off Pirates' starter Paul Maholm, puts DC up 3-2, and Alberto Gonzalez's RBI double makes it 4-2 Nationals. After Delwyn Young's solo shot off DC reliever Jorge Sosa (1st batter Sosa faces as a National) makes it 4-3 DC, Hammer comes back again with an RBI double in the eighth to score Ryan Zimmerman from first and lift DC to a 5-3 victory. Mike MacDougal comes on to close it in the ninth and Sean Burnett gets the win after retiring 1 batter in the bottom of the sixth!!! Vulture!! Burnett burns his former team after calling them a laughingstock!! Well played, sir. Now straighten your cap...

Miss The Game? Some Of The Faithful Were Watching The Win.

For The Completists, Full Game Report After The JUMP... 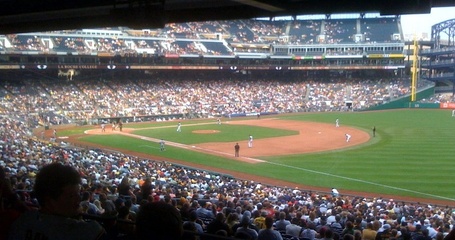 (photo by Doghouse, sent via iPhone)

Delwyn Young throws to first in front of Nyjer Morgan to give Pirates’ lefty Paul Maholm his first out of the afternoon. Cristian Guzman drops a mistake pop inside the right field line for a one-out single. Ryan Zimmerman grounds to short, Ronny Cedeno to Delwyn Young to Garrett Jones at first, double play...Andrew McCutchen chases a two-strike curve into the dirt and Wil Nieves has to throw to first for the out. Cristian Guzman throws out Lastings Milledge. Balester drops another bender on Garrett Jones and has two swinging K’s in the first.

Paul Maholm walks Josh Willingham in front of Elijah Dukes. Dukes, first pitch swinging, rips a single through second. Ronnie Belliard grounds to short, Ronny Cedeno gets the force at second and Dukes’ hard slide makes sure it’s not a DP. Alberto Gonzalez grounds weakly enough to short to score a run, 1-0 DC as the Hammer crosses. Wil Nieves chases a high fastball and K’s swinging to end the Nationals’ second...Balester gets up two strikes on Ryan Doumit then gets an infield pop with a 2-2 curve for the first out of the bottom of the frame. Ryan Zimmerman throws a little wide of first, but Belliard stretches to get Delwyn Young on the groundout. Andy LaRoche pops up over second and it’s 1-0 DC after two.

Collin Balester takes four straight balls for a leadoff walk in the third. Nyjer Morgan spins a liner to short, Ronny Cedeno does it himself, stepping on second and firing to first. Cristian Guzman’s sprinting on a grounder deep in the hole at short, but Cedeno makes the throw...Brandon Moss grounds a two-strike curve back up the middle for a leadoff single. Ronny Cedeno rips a fastball that’s up in the zone and it’s out of the yard and into the concourse before Bally gets a new ball. 2-1 Pirates. Paul Maholm gets mistreated at the plate. Andrew McCutchen flies out to left, WIllingham has it. Lastings Milledge lines a single over second, and gives Garrett Jones a chance with two down. Then Milledge takes it away, caught stealing on the throw from Wil Nieves.

Ryan Zimmerman starts the fourth with a single through short. Josh Willingham grounds sharply to third, and Andy LaRoche just gets the force at second. Elijah Dukes pops out foul of first for Garrett Jones. Ronnie Belliard up, but Willingham gets picked off first and tagged at second to end DC’s fourth...Garrett Jones takes a four-pitch walk to leadoff the Bucs’ fourth. Ryan Doumit grounds to Alberto Gonzalez to Cristian Guzman to Ronnie Belliard double play. Delwyn Young pops out to the infield to end the fourth.

Ronnie Bellliard grounds to Delwyn Young to start the fifth. Alberto Gonzalez K’s swinging. Wil Nieves grounds to short and it’s 2-1 Pirates after four and a half...Andy LaRoche pops out to Cristian Guzman in foul territory in left. Brandon Moss pops out over short. Ryan Zimmerman backhands and fires to first to get Ronny Cedeno to end the fifth.

Collin Balester almost beats Maholm to the bag on a groundout to first. Maholm hits Nyjer Morgan. Morgan gets picked off first, but breaks for second and beats the throw but overslides and gets tagged out. Cristian Guzman K’s swinging to end the Nationals’ half...Paul Maholm grounds out. Andrew McCutchen drops a leadoff liner into short center to start the Pirates’sixth. Lastings Milledge up, McCutchen caught stealing on what looks like a hit and run gone wrong. Garrett Jones takes another walk. Balester out, Sean Burnett on in relief, and he pops up Doumit to end the sixth. Still 2-1 Pirates.

Ryan Zimmerman rips a single by a diving Adam LaRoche. Josh Willingham gets a fastball low and inside and destroys it, deeep to left and GONE!!! Two-run blast, 3-2 Nationals. Elijah Dukes pops out to right. Ronnie Belliard lines to left, Milledge misjudges it and it bounces into the left field stands. Alberto Gonzalez singles over third, line drive RBI double, a fan interferes and gets tossed, but the damage is done, 4-2 DC. Jesse Chavez is on for Maholm. Wil Nieves grounds weakly to second. Gonzalez takes third. Anderson Hernandez with the pinch hit chance. "Elvis" flies out to Milledge in left to end the DC seventh...Delwyn Young takes Jorge Sosa deep to right center and into the bleachers, 4-3 DC on Young’s solo shot. Andy LaRoche follows with a line drive single to right. Sosa strikes out Brandon Moss with a low bender inside. Ronny Cedeno up, Sosa throws a wild one by Nieves, LaRoche takes a step toward second and gets nailed by Nieves trying to get back to first. Cedeno pops up over home, Nieves makes the grab...

Nyjer Morgan grounds out to Delwyn Young at second. Cristian Guzman grounds out to second for out No. 2. Ryan Zimmerman walks with two down. Jesse Sanchez vs Willinghammer. Hammer lines to left and to the wall, Zim comes around from first and it’s 5-3 DC. Elijah Dukes K’s swinging to end the DC eighth...Jason Bergmann takes over in the eighth inning for DC. Ramon Vazquez hits a leadoff single to start the Pirates’ eighth. Andrew McCutchen pops out to center. Lastings Milledge K’s swinging, and Bergmann’s lifted for Ron Villone. Garrett Jones flies out to Nyjer Morgan in center to end the eighth.

"Wild" Joel Hanrahan starts the ninth by popping Ronnie Belliard up. Belliard rips a line drive to left for a leadoff single. Alberto Gonzalez flies out to McCutchen in right center. Wil Nieves pops out to the infield. Willie Harris works a two-out walk. Nyjer Morgan takes an 0-2 pitch that gets by Doumit. Nyjer Morgan K’s swinging, and has to be thrown out....Mike MacDougal gets a groundout from Ryan Doumit on the first pitch of the game. Delwyn Young grounds out to short. Andy LaRoche takes a two-out walk. Brandon Moss lines to short, Guzman grabs it...Nationals win. 5-3 final.