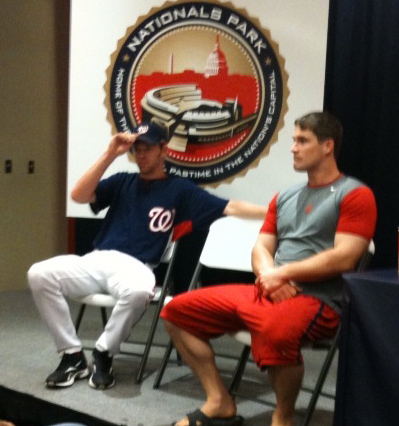 For the second time this season, the Washington Nationals gave a group of Nationals bloggers access to their players, coaches and Front Office personnel so we could report back on the state of the team and their thinking heading into the last month of the 2009 season. In the first of a series of four interviews I'll post in the next few days, we were given the opportunity to interview left fielder Josh Willingham and starters Garrett Mock and Collin Balester. What follows is the full transcript of the 11:56 "press" conference that took place this afternoon. (ed. note - "I did however paraphrase the questions for brevity's sake..."):

Q: Looking toward the end of the season, what has the team accomplished to help them going forward.

Josh Willingham: "Well, I think when you look at where we've come since Spring Training, I think a lot more pieces are in place now, you know, and you kind of know where your future is heading, like, you talk about getting a guy that can be a leadoff hitter and get on base and steal bases, we got that in Nyjer (Morgan). Also a guy that can roam around and cover a lot of the ground in the outfield. So you kind of fill...we were in need of a center fielder that could really play defense, you know pretty much the whole year, and we got him and also a leadoff man so you kinda killed two birds with one stone. Obviously, our starting pitching is talented but young, and it's one of those things where you're gonna to have to kind of let them grow into the player that they're going to be. As far as our lineup, you know, I think our lineup's been pretty steady all year, and we've got some pieces in the middle of that lineup, when we get Flo (Jesus Flores) back next year, that we'll have a chance to make some noise next year, but I mean, I think this year has been kind of a building process and trying to get to where, get the pieces in place to get where we need to go."

Q: How frustrating was it for you earlier in the season when you weren't playing every day?

Josh Willingham: "Well, it was frustrating because I'd always played every day, or not every day, but I've always been an everyday player, since I started playing in the big leagues, so, that was obviously frustrating, it was something I've never done before, but it's also something I couldn't control, so once I realized I couldn't control it, I sort of stop worrying about. And, in this game, there's so many things you can't control so you just kind of have to focus on the ones that you can, so..."

Q: What differences resulted from the change in pitching coaches from Randy St. Claire to Steve McCatty?

Collin Balester: "You know, with St. Claire, he was more about looking at video and looking at things, that uh, you know more along the lines of what these hitters can't hit in this league, and what these guys, what their weaknesses are instead of our strenghts, as a pitching staff, and McCatty, you know, one thing he stresses the most is pitching to our strengths instead of trying to pitch to their weaknesses if that might not be our strengths. So, as a whole it's been just a better atmosphere as far as just throwing our pitches that we want to throw to these guys instead of trying to pitch around these guys and throw stuff that we might not feel comfortable throwing to these guys, and I think it's a positive outlook, you know, right now, we're still a little young and still learning how to pitch up here, but uh, he's helping us through it and I think, in the long run, it's going to be a much better pitching staff in the next couple years..."

Garrett Mock: "He touched on pretty much all the points, I mean "Cat's" biggest thing is pitch to contact, trust the defense, and um, you know being, kind of echoing what Bally said, being a little bit younger pitching staff, I mean, I'm not necessarily young, I'm 26, but you know, as far as experience goes, I'm still pretty young, especially considering major league baseball and my time here, Cat's biggest thing is pitch to contact, trust the defense, and you know you might go out and have the best stuff on the best day in perfect conditions and you might not be successful, cause you're trying to do too much, and then on a day when you don't have your best stuff and you have to battle through it and you just have to just grind it out and put the ball over the plate, those are the days you end up having more success cause you're trusting the defense and pitching to contact, so, what Bally says is right on and, just pitch to contact..."

Q: How has being moved around between the bullpen and rotation affected you?

Garrett Mock: "It's been an adjustment, although it's been unfortunate, you know to have to be here and you know it's a dream come true, and then have to go Triple-A, which is, I mean, it's baseball. It's been a very very good learning experience for me, I've gotten to see the game from a couple different of points of view, at different times, and against different teams, so it's been tough at some points, adjusting my routine, but it's not anything that I don't think I've been, it hasn't been too tough to handle and to make those adjustments and you know, it's been a great learning experience..."

Q: From a player's perspective, would you like to see the draft, how amateurs enter the league change?

Josh Willingham: "I really hadn't thought about that, that's, I'll let the people that have to think about it think about it, but um, I really don't have a comment on that...

Collin Balester: "As far as the signing bonuses are concerned, I think, it's a thing where, you know, these players, in the amateur, like high school, college, they want to get their signing bonus, and to get all their money there and hold out, and I think, just going through that whole process and doing that, and obviously it's a little different, I don't have to go through it again, but you know, I think, uh, these players need to learn that it's not the signing bonus that's going to get you all your money, it's playing in the big leagues and making a name for yourself at that point, and uh, I think that's the one thing that, I guess American players don't understand, is that you gotta earn your way through it instead of trying to get $15 million...or, not saying that, you know cause I think he's a great player, Strasburg, but, just trying to uh, (uncomfortable laughter), I'm saying, as a whole, they're trying to get as much money as they can in their signing bonus instead of working their way through the minor leagues and earning their keep in this league, and I think that's the only difference of uh, the mindset of these guys, year after year, I think something needs to change in that whole aspect of it..."

Q: Collin, you played down in the minors with Clint Everts and Chris Marrero, who had big signing bonuses, were they treated any differently down there?

Collin Balester: "I think that all gets blown out of proportion, I think, I think everyone gets treated the same, you know, there's no difference, some people just make more money at the beginning than others, and you know, once you get in it's everyone's treated the same and it's just a way of, uh, who's going to work harder to get to the top."

Q: Josh, When the ball goes into the gap and Nyjer Morgan's playing there, do you tend not to run as hard?

Q: Do you give way to him every single time right now?

Josh Willingham: "Well, I mean, if he calls the ball, I'm getting out of the way. I don't want to catch it when he's calling it. So, I wouldn't say you run any slower or any harder, you still go after the ball the same, he just gets to so much more stuff, you know, the balls that, you know, the center fielder and I earlier in the year were going all out after in the gap, he's getting to those balls, it just makes a world of difference."

Q: How much attention did you pay to the signing of a big name pitcher? (Like Strasburg?)

Josh WIllingham: "Well, I mean, I don't get wrapped up in it at all. I think it's very important that we signed him, because you want...as an organization, you need to sign your top picks, and the picks that are talented and are going to help you win down the road, but as far as me personally, or players in general, we don't get wrapped up in it, we have enough to worry about, you know, playing every day."

Q: Are you looking forward to playing the spoiler's role the rest of the season?

Garrett Mock: "I mean, from my standpoint, I'm not going to go hit a three-run homer like Josh will, I think there's uh, there's a lot of stuff that goes into it, as far as spoiling someone's playoff dreams, I mean, for me personally, I'm not going to go out on the mound with that mindset, I just think that, you know, as a starting pitcher, or a bullpen guy, or  as a defensive or as an offensive player, you have a job to do just for that day, like today for this game, you know, if I'm starting, my job is to keep my team in the ballgame, try to save the bullpen's arms a little bit, and uh, kinda going back to what I said a minute ago, you know, just pitch to contact, get the game going and uh, try to give the team a chance to win. As far as the pressure of the playoff and all that, I think that's more on the other side, if I can do something and play a part to put a quality start up and play the spoiler, then that's great, but as far as the mindset of we're going to go ruin someone's day..I think we just want to go out and just win..."

Josh WIllingham: "I think, having a chance to play, to ruin the Mets' chances the last couple years being with the Marlins, it's not like you want to go out and win anymore, but the atmosphere there, especially when you're on the road, is playoff atmosphere and that's fun to play in, that's why you want to play in and win those games..."