5. Citi Field: For the first time all season, I simply watched a game last night. My trusty iPhone's battery was dying by the time I arrived at Citi Field and I used to sparingly to mostly sarcastically comment on the action in last night's Nats/Mets matchup, which featured 7 hits total, 3 of them HR's over 10 innings of play, one each by NY first baseman Ike Davis and D.C. RF Michael Morse and then in the 10th a walk-off blast by Josh Thole which gave the Mets a 2-1 win and the Nats their 92nd loss of 2010. The announced crowd of 29,424 is almost humorous. There were maybe 10,000-12,000 in attendance, at best. Jordan Zimmermann looked sharp against a makeshift Mets' lineup, though the stadium's radar gun had him around 90-91 all night, which is a bit slower than usual for the 24-year-old right-hander. Over 6.0 IP, Zimmermann allowed just 3 hits and 1 earned run, outdone only by Mets' lefty Pat Misch who recorded 10 K's and surrendered the same 3 hits and 1 ER over 8.0 innings pitched. The final start of 2010 for Zimmermann caps off what has to be considered a successful comeback season which saw the '07 2nd Round pick work his way back to the mound following Tommy Johnson surgery which ended his '09 season prematurely. While most in the organization and certainly the fanbase hoped Zimmermann would return to join Stephen Strasburg atop other 2011 rotation, he can instead serve as a template for what fans can hope to see from their '09 first-rounder when Strasburg eventually makes his way back to the mound either late next season or in 2012...

4. Out Over the Xerox Sign: Ike Davis' fourth-inning dinger off Zimmermann was the Mets' first baseman's 19th of 2010. The 23-year-old '08 1st Rounder took a first-pitch fastball from Zimmermann over the wall in right, clearing the Xerox sign and falling into the bullpen between the Dunkin' Donuts billboard and the Wise Snacks sign. Raise the APPLE!! Maybe it's just that I've spent so much time in Nats Park this season, but I couldn't help but notice the fact that every inch of Citi Field is covered in ads, which may not be aesthetically pleasing but probably pays for the $36M the Mets have tied up in Johan Santana, Oliver Perez and Francisco Rodriguez in 2011...

3. MOAR MORSE: Michael Morse once again provided a glimpse of how he's insinuated himself into the discussion for a starting job in right or as a potential replacement at first should the Nats be unable to come to terms with Adam Dunn when the season ends by providing the only offense the Nationals could muster. Morse's 7th inning blast fought its way through a strong wind that had knocked down several fly balls last night and went out to center between the Nikon and GEICO signs for his 14th on a 2-1 change the 26-going-on-27-year-old put a charge in, tying the game at 1-1 and forcing things into extra innings when neither team scored in the 8th or 9th.

2. E: 125-126: What was Nyjer Morgan doing all the way over in left? Wasn't that Justin Maxwell's ball, or should he have deferred to the center fielder? The Mets' announcers calling the play changed their opinion several times as they watched the replay, eventually settling on the fact that it was Morgan's ball but Maxwell seemed to have called it, but instead of an out, Ike Davis' fly ball to left center ends up an error, the Nats' league-leading 126th of 2010, barring more errors by the Pirates or Cubs last night in the close race for E-crown. Maxwell's charged with the error since he was taller than Morgan and got his glove on it first, but Morgan reportedly took the blame in post game answers he gave to the media. Either way it was Maxwell's second E of the night after he'd misplayed a grounder to left by Angel Pagan into a double when he came up empty as he sprinted in and attempted to come up throwing.

1. T-Hole: Right into the Mo-Zone near the Caesers sign. Josh Thole, who's apparently, at least to the fans where I sat, known as T-Hole instead of "toll-e", took a 3-1 fastball to right off Nats' right-hander Tyler Clippard, who'd blown Mike Hessman away for the first out of the tenth. The Mets' catcher's 3rd HR of the season gave the fans in attendance a reason to cheer and his teammates a reason to deliver a home plate beatdown. The walk-off blast leaves the Nats 68-92 with just two games remaining, and my 70-72 win prediction hangs in the balance. Can the Nats climb to 70 wins? An 11-game improvement over their '09 record? Two more chances Saturday and Sunday with Yunesky Maya and then Livan Hernandez on the hill... 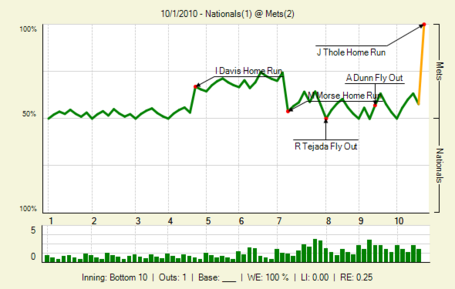