5. Thanks, Charlie and Dave: Hearing WFED 1500's Charlie Slowes and Dave Jageler transition smoothly between an audible Roger Bernadina F-Bomb which was captured on air to an ad for Rosetta Stone's language learning software pretty much sums up the joy of listening to the voices of the Washington Nationals on the radio. In the final pregame interview of 2010 with Nats' Skipper Jim Riggleman, Mr. Jageler asked the manager for his thoughts on the Nats' Game 162 starter, Livan Hernandez, the 35-year-old right-hander, who entered the game as the winningest starter amongst Nats' pitchers and clearly the leader of the D.C. rotation:

Jim Riggleman: "[Livan was] another great acquisition, you know. He was with us the previous year, but he was without a job all winter, signed late in Spring Training and ends up being our no.1 guy. These stories happen around baseball, and it's just a great message to anybody out there who perseveres, doesn't give up, you never know what's going to happen if you believe in yourself, and [Livan] certainly believes in himself."

The Nats' veteran starter holds the Mets off the board early as NY's Mike Pelfrey holds the Nationals' late-season lineup to one hit through three in the season finale. After a one-out HBP on Ruben Tejada, Livan gets a sac bunt from Pelfrey and a lineout to left from Jose Reyes to complete his third hitless frame. Livan gives up a two-out single to Ike Davis in the fourth for the Mets' first hit, but he catches the Mets' first baseman leaning, and after an inning-ending rundown he's got four scoreless in the books.

4. No Seven-In-A-Row This Year: The Washington Nationals inspired some in the fanbase with the 7-game win streak they went on to end the '09 campaign, which I think I'm required to mention marked the first time a team lost seven to start a season and won seven to end one, but there's been no streak of wins at the end of the 2010 season, in fact, the Nats are trying to avoid losing four-straight and getting swept by the Mets. With a season-ending win there's a 10+game improvement on last year's win total, which may be every bit the misleading sign of improvement that the 7-game win streak was, but it's something to look to as a sign of progress and another ten next year gets the Nats even closer to .500 and then hopefully contention.

3. Roger Bernadina Avoids DP: Roger Bernadina works a leadoff walk out of Mike Pelfrey and he's running when Pudge Rodriguez shoots what could be another GIDP out to short so it's only an out at first and Bernadina's able to take third in the next AB when David Wright makes an off-balance throw to first on a weak Willie Harris grounder toward third. Alberto "The General" Gonzalez collects his 5th RBI of 2010 when he lines to right for his second hit of the game and first run batted in since August 8th against LA. 1-0 Nats. Livan Hernandez bunts too hard toward first and Ike Davis is able to start the DP with a throw to third for Wright and on to first for the inning-ending 3-5-4. The Mets, of course, come right back and score the tying run in the bottom of the frame, when Angel Pagan and Lucas Duda hit back-to-back singles and Pagan scores from third on Chris Thole's DP grounder. 1-1 game just like that.

2. RISP FAIL: One more time this season, the Nats fail to cash in runners. Danny Espinosa singles to start the sixth and Nyjer Morgan walks to put two on with no one out. Nyjer Morgan gets thrown out at second on a bunt toward third by Desmond when David Wright decides to throw to second. Adam Dunn pops out to Wright behind third. Roger Bernadina grounds to first. Two on, no outs = Nothing. Still 1-1 after six innings.

1. Mr. National Leaves Mound With Pudge: After surrendering a two-out walk to Josh Thole and a two-out single to Ruben Tejada, Livan Hernandez is lifted from the game by Nats' Skipper Jim Riggleman, who calls to the pen for Sean Burnett and gets Wilson Ramos off the bench for two of a few curtain calls today. Livan and Ivan "Pudge" Rodriguez exit the game together to the polite applause of most in NatsTown and whatever Nats fans happen to be in Citi Field. Livan will get no decision...

-1. E: 34, E: 127: Ian Desmond tries to barehand a sharp grounder from Jose Reyes but misplays it into a runner on first with no outs in the Mets' eighth. A sac bunt from Jesus Feliciano leaves first base open for David Wright, who gets the intentionals. Ike Davis up with two on and one out. Davis lines out to Desmond at short, and Nats' lefty Sean Burnett completes his second scoreless when he pops Angel Pagan up to second, 1-1 game after the eighth inning of play in New York. But that's E: 34 on Desmond and the Nats' league-leading 127th error of the year. Subtract Desmond's 34 errors, however, or cut them in half like you hope he would next season and that's 30 errors less than the Nats committed in 2009. Sign of improvement?

- 2: Dunn Done In D.C.?: Adam Dunn beats the shift with a trademark single™ to start the Nats' ninth and he's pulled from first for a pinch runner shortly after Mets' Skipper Jerry Manuel had given both Jose Reyes and David Wright a chance for a curtain call by replacing them after they'd taken the field. The difference between the three? The Mets are sure Reyes and Wright are coming back in 2011. Adam Dunn? Well he told the fans through the press again this morning that he'd like to return but he will test the free agent market, so nobody knows and they might not for quite a while this winter, which only drags out the uncertainty for a fanbase that's made it known that they'd overwhelmingly like to see him return. #signDUNN!!

- 3. The Season Won't End: Tied at 1-1 after nine, the Nats and Mets are going to extras on the last day of the 2010 season for both teams. 10 innings isn't enough. Nats' rookie Drew Storen gets the last out of the ninth after Doug Slaten retires two Mets and Nats' Skipper Jim Riggleman brings the Nats' second '09 1st Round pick back out for the tenth and eleventh, completing 2.1 scoreless with a backwards K from Lucas Duda, who stares a 2-2 slider all the way in for a called strike three. 11 innings isn't enough. 12 innings isn't enough. 13.0? Nope.

-2. On to the 14th: NY brings the highest paid junk-time reliever in baseball history (haven't verfiied this) out to the mound to start the fifth extra inning. Oliver Perez gets a Bronx Cheer in Queens when he strikes out Ian Desmond to start the top of the frame. Adam Kennedy's hit for the third time in two games. Kennedy takes second, stolen base. Roger Bernadina walks. Wil Nieves walks. Bases loaded for Justin Maxwell, who walks to force the go-ahead run in. 2-1 Nats. Miguel Batista comes on to close out the Nats' 69th win, and gets help from Roger Bernadina, who makes one more diving catch to rob Angel Pagan. One down. Lucas Duda grounds out and after a two-out walk to Josh Thole, a line drive to center by Ruben Tejada that Nyjer Morgan gets to ends the 2010 season with one last curly-W. Washington Nationals 2, NY Mets 1.

• Miss The Game? The DC Faithful WERE WATCHING TIL THE END. 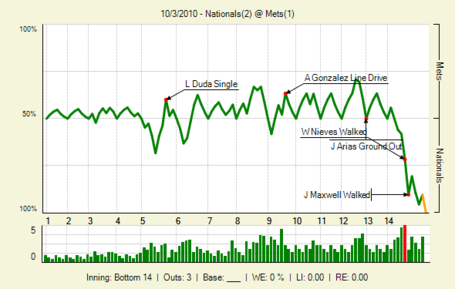