I'm not sure what exactly I expected when it was announced that the Washington Nationals would be holding a "fashion show" to unveil their redesigned jerseys, but they were apparently quite literal as the Stars and Stripes Club was transformed last night, with a Nats-red runway at the far end of the room and a relatively small seating area arranged around the stage where the team had players (Ryan Zimmerman, Jordan Zimmermann, Tyler Clippard, Drew Storen, Ian Desmond and John Lannan) walk out in the new uniforms the Nats will be wearing in 2011. Gone are the home whites with the "Fuddruckers" lettering, replaced by sharp whites with a curly-W logo on the left breast and the player's number on the lower right of the front of the jersey. All of the gold has been removed from the design. The new alternate jerseys are a red version of the same jersey, the new "holiday" alternates in blue with the same design and a star-striped curly-W. The road grays have changed little outside of the addition of the Nats' new primary logo on the sleeve, but the new road caps feature a red brim on navy cap, replacing the classic blue curly-W cap...(my one complaint, I like the all blue road cap)....

The players walked the stage, worked the crowd. Tyler Clippard is particulary proud of his legs apparently. Zimmermann...uh, another asset...Lannan and Desmond had apparently worked out a routine that had one player posing, arms crossed at the edge of the stage, while the other pointed out the new features on the jerseys. The iconic curly-W is now the focus of the Nats home uniforms. You can see the new uniforms this afternoon at the Nationals Park Team store, where players will be signing autographs from 11:30 a.m. to 2:00 pm. Photos of the new jerseys and the fashion show after the click-through... 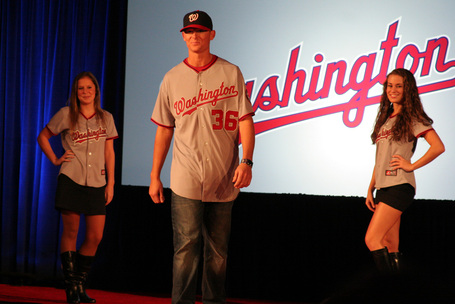 (Tyler Clippard in the new road jerseys. Image courtesy of and © copyright by Ian Koski/NatsDailyNews.) 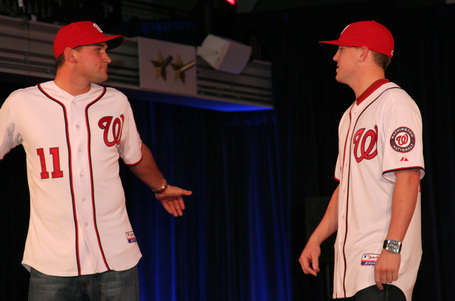 (Ryan Zimmerman (left) and Drew Storen in the new home whites. Image courtesy of and © copyright by Ian Koski/NatsDailyNews.) 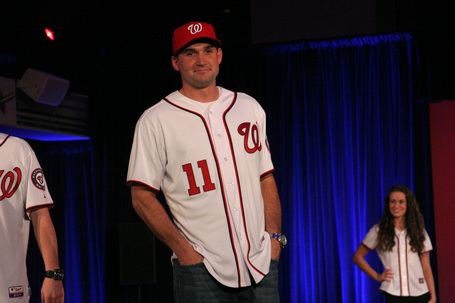 (Ryan Zimmerman in the Nats new home whites. Image courtesy of and © copyright by Ian Koski/NatsDailyNews.) 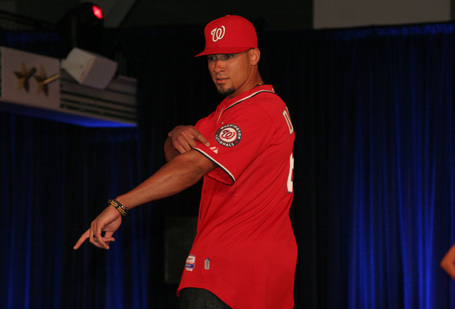 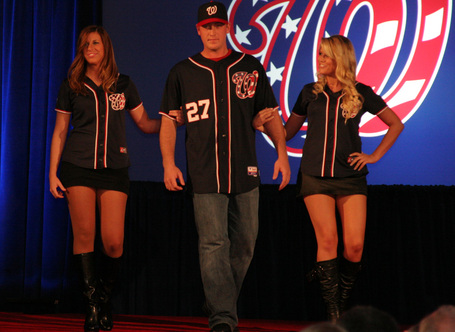