Ground Ball/Fly Ball - What Pitcher is best for the Nats?

Share All sharing options for: Ground Ball/Fly Ball - What Pitcher is best for the Nats?

There was a lot of speculation this week regarding Chien-Ming Wang. Assuming he regains his health and form from a few years ago, he is a reliable ground ball pitcher. Is he a suitable pitcher for the Nats? Would the Nats infield defensive issues adversely impact his effectiveness? What about all Nats pitchers? Do the Nats have a higher error rate with ground ball pitchers than they do with fly ball pitchers? Will the stats tell us anything that our eyes don't see? Lets look at the numbers for answers.

The first step is to find the ground ball/fly ball ratio for Nats pitchers.  In 2009, the NL ground ball/fly ball ratio (GB/FB) was 0.80.  The AL ratio was 0.76.  While this may seem low at first, remember that a lot of singles, most doubles and triples, and all home runs are considered fly balls.  That lowers the ratio.  Pitchers with a ratio higher than 1 are considered ground ball pitchers.  Here is a chart with the Nats' 2009 GB/FB ratio - the dashed line is set to the NL GB/FB 0.80 average. I also added winter signings to the chart. 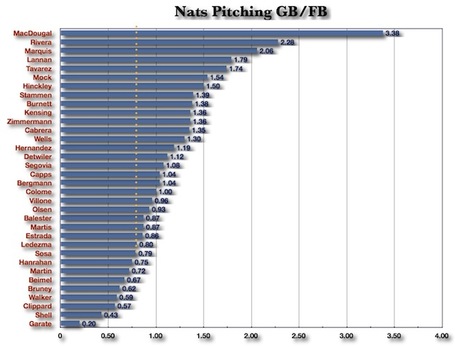 The first thing that jumps out is Mike MacDougal's 3.38 ratio in 2009. That is unrealistic over a career. To his good fortune, the high ratio came in a year when he walked as many as he struck out. Many of those ground balls resulted in inning ending double plays to erase the runners he walked in the first place. You also see that Jason Marquis had a ratio of 2.06, which helped is effectiveness pitching in Colorado. Many of the Nats young starters kept the ball on the ground in 2009.

In a perfect world, GB/FB shouldn't matter - the fielders should have a consistent error rate. Over the course of a season, roughly the same percentage of errors should occur for each pitcher as the percentage of batters faced. For example, if John Lannan faced 10% of the batters in 2009, then 10% of the errors should have occurred while he was on the mound. The next graph shows how the Nats did in 2009. I labeled ground ball pitchers in red, and fly ball pitcher in black.  If errors were distributed evenly, all markers would be on the line. Above the line, the Nats defense had a higher than expected error rate, below the line a lower than expected rate. 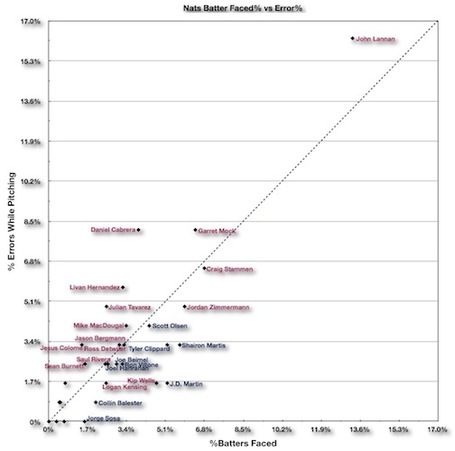 Look what happened in 2009.  The Nats defense suffered a higher than expected error rate for most ground ball pitchers (in red).  Every fly ball pitcher (in black) was below the line. You look at this chart and you think - wow, our infield is killing our pitchers.  But is that the case, or is this an instance where the numbers lie?  It's easy to assume by looking at this graph that ground ball pitchers are being impacted by the infield defense, but there is a way to make sure.

At every MLB game, spotters sit with a computer and a satellite image of the stadium. For every ball put in play, the spotters mark the image, which is used by MLB GameDay for their play-by-play graphics. I gathered all of the location data for 2009, and matched the spotter information for each play where a Nats error occurred. Here is the graph. Remember that this is the location where the ball was hit, not necessarily where the error occurred. For instance, if the right fielder was trying to throw a runner out at the plate and the catcher dropped the ball, the spotter's mark will be in right field. Also, the Nats made more than 1 error on a few plays last year, so the number of locations is less than the total number of errors. 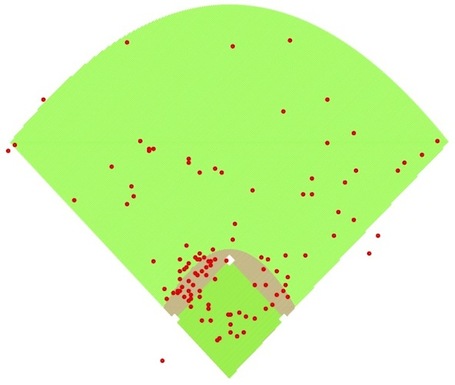 Here is the key to the final plot. 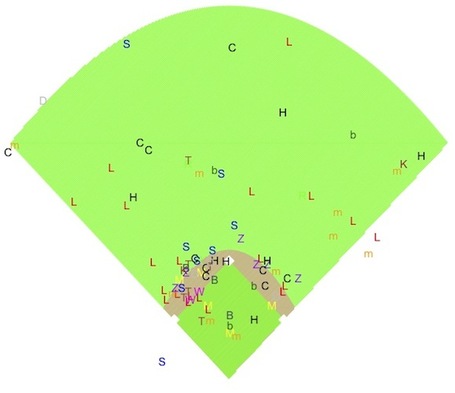 Look at the red Ls. Those are the errors that the Nats made while John Lannan was on the mound in 2009. Almost half of the errors were on balls hit to the outfield.  It gets to the heart of lying with statistics. You can show that the Nats made a higher percentage of errors with ground ball pitchers on the mound, but you can also show that a large number of errors weren't fielding errors made by the infield.  So which numbers do you believe? Does this last chart make you feel better about signing Chien-Ming Wang?