The Washington Nationals have made big changes to their pitching staff this year.  Can this squad throw strikes? How important is it for pitchers to get ahead early in the count?  Does throwing a first pitch strike have any impact on a pitcher's success rate?  How did the Nats current roster do in 2009?  While pitchers and catchers are making their way to spring training, I thought it would be a good time to go looking for answers.

Diving in to the 2009 pitches database, I pulled the first pitch for every plate appearance of the season.  I broke each of those pitches in to one of three categories: ball, strike, and pitch put in play.  MLB batters made over 187,000 plate appearances in 2009.  58.13% of the time, the pitcher either threw a strike, or the pitch was put in play.  After computing that information, it was simple to plot the results.  I created a chart with 4 groups: 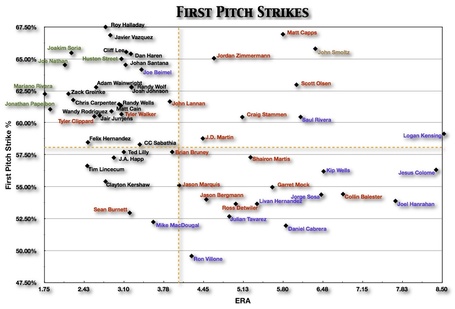 The upper right corner shows pitchers who by and large got ahead in the count, but still had trouble keeping runs from scoring. John Smoltz fell in to this group last year.  He did his usual great job throwing strikes, but he was knocked around quite a bit - raising his ERA to well above the NL average.

In the lower right corner is the worst of both worlds - pitchers who didn't throw strikes early in the count, and didn't stop the runs from scoring.  The good news for Nats fans is that the purple group, highly represented in this quadrant, has been purged from the roster.

Finally, for anyone who needs the numbers down to the hundredth, here is the table I used to build the chart.