Fielding Independent Pitching (FIP) was invented by tangotiger to measure events in a baseball game that were specific only to the pitcher.  FIP helps to describe how well a pitcher pitched, independent of how his fielders fielded. In 2005, Dave Studeman updated the FIP algorithm based on research from Ron Shandler.  This research showed that pitchers don't have total control over a batter's ability to hit a line drive.  The research also showed that home runs hit were a function of the number of fly balls a pitcher allowed, and of course, the ballpark. The FIP number unfairly punished pitchers with high line drive and high fly ball numbers.  xFIP was created by normalizing each pitcher's home run rate per fly ball.

For those of you whose soul was not crushed by that bit of background info, on with the update.

Hardball Times posts xFIP data for all pitchers.  I pulled the info for the pitchers we looked at yesterday, and regraphed the information.  I kept the horizontal line set at 58.13% - the 2009 MLB average for first pitch strikes/balls put in play. Instead of trying to compute the average xFIP for MLB, I found the median xFIP on the Hardball Times website - 4.70 for 2009.  I used that as my vertical line. Color coding is the same. 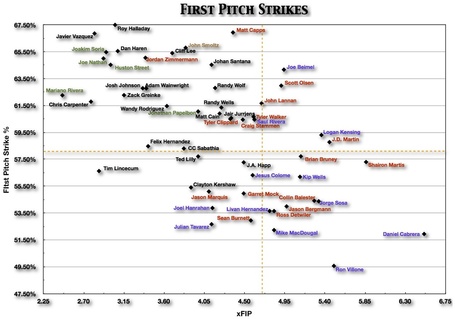 As you can see, one of the big movers is Matt Capps.  It makes sense. He played for a team with a weak defense last year, and was potentially penalized in ERA.  Of course, I'm not sure signing with the Nats is really going to move the needle in 2010.

The thing these charts do show is this - you gots to throw strikes.

For those of you who are curious about the ERA/xFIP differential, here's the chart.