(ed. note - "This went up just before I put the post game up late last night, so in case you missed it, Natsstats looks at Drew Storen's MLB debut...")

Drew Storen wowed Nats fans in his first Major League appearance on May 17th against the St. Louis Cardinals. After a minor bout of opening night jitters, Storen settled down and showed us why he belongs in the majors. With Pudge Rodriguez calling pitches behind the plate, Storen mixed blazing fastballs, change ups and curve balls to keep the Cardinals hitters off balance. Storen came on in relief of Doug Slaten in the 7th with one on and one out. Using the Pitch F/X data, here's how Storen handled the Cardinals. Remember that the red box is the strike zone, and that they view is the umpires view from behind the plate.

The first batter Storen faced was former Nat Felipe Lopez. Nats fans remember Lopez for his 2008 season when he hit .234 while slugging .314. Lopez is known for swinging at everything near the plate, and he didn't disappoint. Storen threw 2 pitches to Lopez. 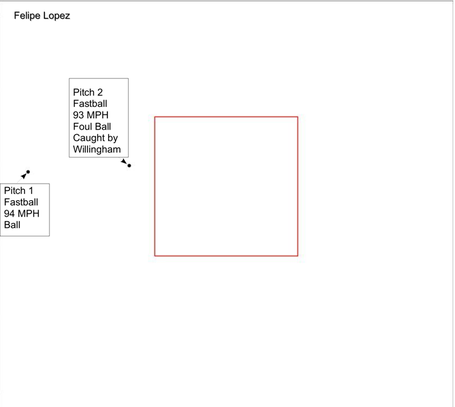 Storen next faced Ryan Ludwick. The best thing about this at bat was Storen's fearlessness to pitch inside. After throwing two outside pitches to Lopez, Storen threw a pitch over the plate and a pitch outside to Ludwick, drawing Ludwick closer to the plate. Storen then busted Ludwick up and in, hitting him in the hand. It's great to see a Nats pitcher back batters off of the plate. Here's the sequence to Ludwick: 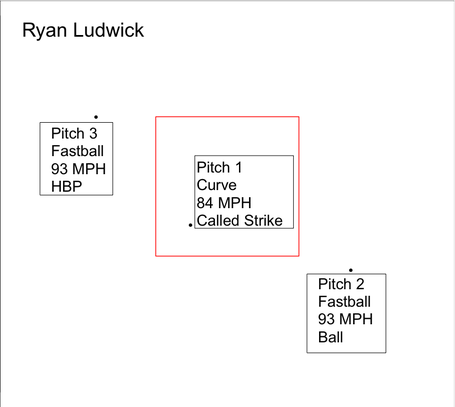 With two outs and runners on first and second, Matt Holliday came to the plate. For those who love baseball, this was a classic at bat. Great individual efforts by both Storen and Holliday extended this appearance 8 pitches, before Storen retired Holliday on an inside fastball. Here's the sequence: 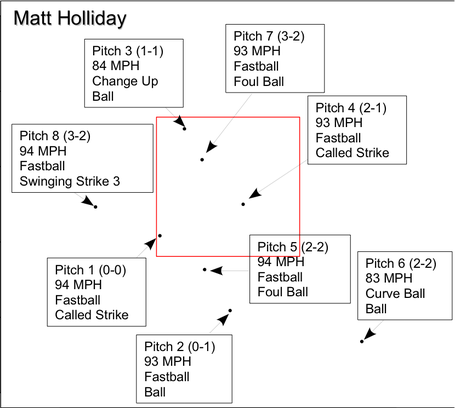 It was only 1 game, 3 batters, and 2 outs, but after several years of bullpen fail, this was an energizing effort by a young rookie that will keep Nats fans spirits riding high for some time.