5. Nyjer Morgan In Starting Lineup, Fans Not Happy: How could Jim Riggleman not sit him? Nyjer Morgan's tantrum can't go unpunished!! It's like having Manny Acta back all over again? Nats' Skipper Jim Riggleman was asked by the Nats beat writers before the game if he'd even considered benching Nyjer Morgan after Saturday's misplay and outburst but as the Nationals' Manager explained:

"I thought about it...but I have to do what's best for the ballclub and i've got to keep in mind that Nyjer's struggling, I don't want to kick him when he's down."

Morgan's response? He goes 2 for 5 with a run scored and even makes a play on a fly ball to center from Nick Markakis that had the majority of the crowd holding their breath and hoping it didn't reach the wall.

The Nats' right fielder today, Roger Bernadina, who seems to be making the spot his own, took a few moments this afternoon to sign autographs for fans and even took 5 questions from Federal Baseball before taking the field and going 1 for 3 with a three-run triple in the bottom of the first after John Lannan had allowed the O's to jump out to an earlier lead in the top of the frame. Nyjer Morgan and Cristian Guzman single to start the home half of the first, Ryan Zimmerman grounds into a force at second but beats the DP throw to first while Morgan takes third. A HBP in Josh Willingham's shoulder sets Bernadina up with the bases loaded and two outs and the 26-year-old left-handed bat strokes a 1-2 change from O's righty Kevin Millwood to center, where Adam Jones "Morgan's" the fly ball into a triple, getting there and then having it bounce out of his glove when he hits the wall. Three runs score, 3-1 Nats...

Jim Riggleman: "You know, he's just getting a little better each time, and he's really finding his way a little, getting a little more comfortable, and it's nice to have to a couple guys who come through your system, you know, we have quite a few of them out there, Zimmerman, Ian Desmond, Bernadina, you know guys that [are] homegrown coming through the system to make you feel better about the system, our player development's working real hard, and bringing those guys along...but with Bernadina being homegrown it's a good feeling."

3. John Lannan + Grounderz = W? Nats' left-hander John Lannan gave up back to back singles to Corey Patterson and Nick Markakis to start the game with runners on first and third before a DP grounder from Miguel Tejada got the first two outs and scored Baltimore's first run. Lannan then walked one batter in the second and one in the third, but those were the only runners to reach base after the O's first. 5.1 IP, 2 H, 1 ER, 3 BB, 2 K's, 88 pitches, 53 strikes, 9 groundouts and 4 flyouts. Lannan dominates the Orioles, and leaves with a lead that holds up til the ninth.

2. Seventh Inning Issues Solved, And He Can Hit!!! The Nats' second '09 1st Round pick, Drew Storen took over for Lannan in the sixth after his third walk to Corey Patterson and fly ball to center from Nick Markakis. Patterson stole second with Markakis at bat, so the Nats' 22-year-old right-hander entered the game with Miguel Tejada due up and a runner in scoring position. Tejada grounds out to short. Two down. Patterson moves up on the grounder. Storen walks Ty Wiggington on four-straight, to bring up Luke Scott with runners on first and third. Scott fouls off two 1-2 pitches but Storen drops a two-strike curve inside on the corner that drops in on Scott's feet for a swinging strike three and the end of the frame. (ed. note - "Riggleman called the curve a "pretty much unhittable pitch.") Storen's gets his first AB in the bottom of the frame and lines a two-out single to left for his first MLB hit!!! Then throws a scoreless seventh!! STOREN!! (clap clap!!) STOREN!! (clap clap!!)

1. 17 for WHAT???? Sean Burnett and Tyler Clippard combine for a scoreless eighth, and Nats' closer Matt Capps had the entirety of the DC Faithful in Nats Park up and cheering, "Let's Go CAPPS!!" when he enters the game with a 3-run lead looking to convert his 17th save in 17 opportunities. A swinging K from Ty Wiggington only served to increase the decibel level, but a one out single by Luke Scott and a double by Adam Jones set the O's up with runners on second and third and one down. Matt Wieters' groundout scores Scott, 3-2 Nationals, and Julio Lugo's soft liner to right scores Jones and Matt Capps blows his first save of the season... 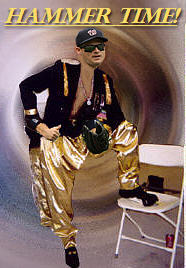 Thanks, Miss B!!! Josh Willingham takes a 1-2 fastball from O's right-hander Cla Meredith deeeeeeeeeeeeep to left and GONE!! WALK-OFF WINNER!!! Hammer drops one into the left field bullpen to take the Battle of the Beltways 2 games to 1 over the Baltimore Orioles and send the Nationals out west to San Francisco where they'll face Barry Zito and the Giants on Tuesday night with Mr. National Himself on the mound for the Nats!! Willingham's eighth HR of the season gives Washington their 7th last at-bat win according to the Nats' post game notes.

1 - Corey Patterson singles up the middle off Nats' lefty John Lannan. Nick Markakis goes back up the middle too and Patterson's on third before an out is recorded. Miguel Tejada with the third grounder, this one's a DP, Cristian Guzman to Ian Desmond to Adam Dunn double play, Patterson scores, 1-0 O's. Ty Wiggington rips a grounder to short, Desmond short hops the throw, but Dunn picks it, 1-0 O's after a half...Nyjer Morgan takes a 2-2 fastball from O's righty Kevin Millwood back up the middle for a leadoff single. Cristian Guzman's bunting for a hit, and he gets it, beating the covering pitcher to first. Two on, no outs for Ryan Zimmerman. Zim grounds into what should be a DP, but beats the throw to first, one down, Morgan on third. Adam Dunn pops out to first. Two down. Josh Willingham takes one in the left shoulder to load the bases. Roger Bernadina flies to deeep right, Adam Jones gets there, leaps and misses it, out of his glove just like yesterday, three runs score, 3-1 Nats on the Bernadina triple. Ian Desmond chases a 2-2 fastball upstairs for a swinging strike three. 3-1 Nats after one.

2 - Luke Scott grounds back to mound to start the second. One down. Adam Jones grounds sharply to second, Guzman fields and throws. Two-out walk to Matt Wieters, and it's Lannan vs Julio Lugo with one on. Julio Lugo grounds into a force at second, 3-1 Nats after one and a half...Nats' catcher Wil Nieves steps up. Single up the middle. John Lannan K's trying to bunt. One down. Nyjer Morgan's bunt attempt is weak, and Wieters cuts Nieves down at second. The Guzzzzzz singles through second with Morgan running. First and third for Zimmerman, who K's looking at a two-strike, two-seam fastball outside.

3 - Lannan drops an 0-2 bender off the plate outside to get Kevin Millwood swinging. Corey Patterson grounds weakly to Dunn at first. Two down. Lannan issues as two-out walk to Nick Markakis, but gets a liner to short from Tejada to end the O's third...Adam Dunn's drilled leading off the third. Josh Willingham pops out unproductively. Roger Bernadina takes a called strike three on another Maddux-like two-seamer. Ian Desmond K's swinging to end the third.

4 - Ty Wiggington grounds weakly back to the mound, one down. An 0-2 bender gets Luke Scott swinging. Lannan gets a fly ball to right from Adam Jones and it's 3-1 Nationals in the fourth...Wil Nieves grounds out to second, one down in the Nats' fourth. John Lannan battles Millwood in a nine-pitch at bat and shoots a one-out single over short. Nyjer Morgan follows with a soft liner through second. The Guzzzz flies out to left. Two down. Ryan Zimmerman is down 0-2 early, and K's staring at a 1-2 fastball outside that cuts in for a called strike three.

5 - Matt Wieters flies out to left-center and Morgan and Hammer collide as Nyjer makes the grab. Julio Lugo grounds out to short. Cristian Guzman sprints into foul territory and catches a pop-up from Millwood, 3-1 Nats in the fifth...Adam Dunn takes a two-strike fastball that breaks in over the plate. One down. Hammer's called out on strikes too. Roger Bernadina grounds to first and can't beat the pitcher to the bag. 3-1 Nats after five.

6 - Corey Patterson leads off the sixth with a walk after a long battle with John Lannan. Patterson steals second with Nick Markakis at bat, but Markakis flies out to center for the second out. Drew Storen replaces Lannan. Miguel Tejada grounds out to short, two down. Storen walks Ty Wiggington, first and third with two down. Luke Scott takes a an ugly swing at a 1-2 curve inside for a K to end the sixth...Ian Desmond grounds weakly to first. Wil Nieves grounds out to second. Drew Storen singles to left center in his first MLB at bat. Nyjer Morgan flies to left, 3-1 Nats after six.

7 - Adam Jones lines to short, one down for Storen in the seventh. Matt Wieters flies out to left, two down. Julio Lugo pops out to short right, 1.2 scoreless for Storen...The Guzzz flies to short center. Ryan Zimmerman takes a one-out walk from Millwood, who's done. Adam Dunn K's chasing junk from O's lefty Will Ohman. Josh Willingham shoots a two-out single to left on a line drive. Mike Morse K's swinging in a PH appearance. 3-1 Nats after seven.

8 - Storen warms up, but after the O's announce their pinch hitter, Riggleman goes to the pen for Sean Burnett. Lou Montanez comes on to hit now. Groundout to the catcher, one down. Nick Markakis goes down swinging. Two down. Tyler Clippard's up. Miguel Tejada flies to Justin Maxwell in right to end the O's eighth...Ian Desmond flies out to left, one down for O's right-hander Matt Albers. Wil Nieves singles on a grounder to third, but Adam Kennedy erases him with a pinch hit DP. 3-1 Nats after eight.

9 - Matt Capps comes on to close it. Ty Wiggington K's on a 0-2 heater that keeps on rising. Luke Scott singles up the middle and beats Guzman's throw to first. Adam Jones doubles into the corner in right. Second and third, one down. Matt Wieters grounds to second, Luke Scott scores, 3-2 Nats. Two down. Julio Lugo singles to right, Adam Jones scores to tie it at 3-3. Matt Capps blows his first save. Lugo steals second with Garrett Atkins up, and Nieves bounces the throw into center. Lugo takes third. Garrett Atkins flies to right to end the O's ninth...Nyjer Morgan shoots a low liner to first, Luke Scott grabs it, one down. Guzman grounds out to first, two down. Ryan Zimmerman grounds out to third to end the ninth with the score tied at 3-3.

10 - Corey Patterson pops out to first. Nick Markakis down swinging. Miguel Tejada grounds out to short, Doug Slaten makes quick work of the O's in the tent...Willie Harris hits a grounder to first the Luke Scott gobbles up, throwing to first where Alfredo Simon gets there but hurts himself doing it. Willingham vs Cla Meredith. 2-1 fastball down the pipe and GONE!!! HAMMER GOES DEEEEEEEEP TO LEFT AND INTO THE VISITOR'S BULLPEN!! 4-3 NATS!!!