Washington Nationals phenom Stephen Strasburg set the baseball world on fire Tuesday night with his record breaking debut. Those of us lucky enough to attend sat, stood, jumped, and screamed in disbelief as Strasburg threw one of the all-time great games. The stadium scoreboard twice flashed the century mark on four seam fastballs. Pirates' batters were lucky to leave the batter's box without pulling a muscle, their swings contorted to helpless flailing. Now that the dust has settled, let's look at the Pitch F/X data to see what we can learn about the wunderkind.

Strasburg's Four Seam Fastball was his bread and butter pitch. He threw it in the range of 96 MPH to 100.1 MPH. The average speed was 98.03 MPH, the median was 98.0 MPH. Here is the Pitch F/X breakdown of Strasburg's Four Seam Fastballs. (Remember Pitch F/X saves data from the umpires point of view - right handed batters on the left, left handed batters on the right.) 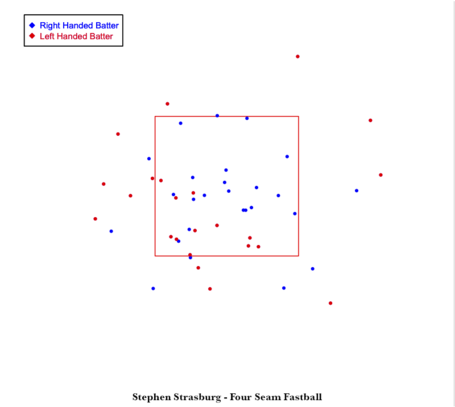 As you can see, Strasburg moved the four seamer around on right handers, working both inside and out. For the most part, Strasburg threw the four seamer away from lefties. The exception was Garrett Jones, who almost lost a finger on an up and in fastball (97.1 MPH). The two pitches you see on this graph that were up and in to lefties were both to Jones. Although Strasburg didn't get a scouting report before the game, Pudge obviously took advantage of the veteran catcher's knowledge of Jones, who twice struck out swinging, and grounded into a double play. Interestingly, notice how Strasburg kept the Four Seamer down in the strike zone. A lot of pitchers with blazing fastballs throw that pitch above the zone, figuring that batters will swing but be unable to adjust to the location. Strasburg threw it for strikes, and the Pirates' batters still couldn't adjust.

According to Pitch F/X, Strasburg only threw 9 Two Seam fastballs, and only 1 to a right hander. The minimum speed was 95.3 MPH, the max was 97.4 MPH. 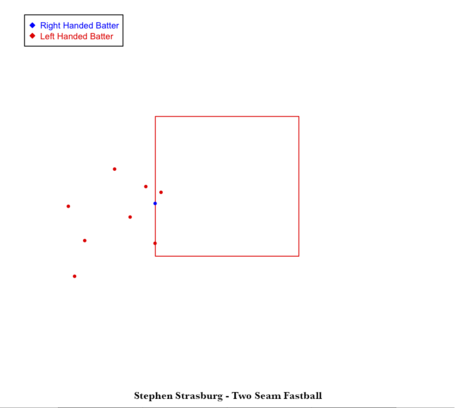 Again, Strasburg worked away from the lefty batters, only throwing 2 two seamers in the strike zone to left handed hitters. The two seamer had unbelievable run away from the lefties. Of the 8 two seamers thrown to lefties, only Garrett Jones put a ball in play - a ground ball double play. Lastings Milledge was the only righty to see the two seamer, which he fouled off. 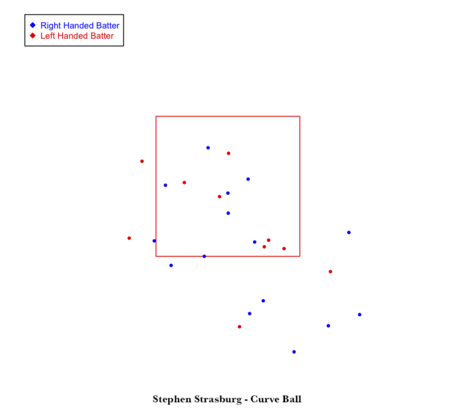 Much in the same way he threw the two seamer to lefties, Strasburg threw several curve balls low and away to righties, inducing them to flail at pitches they had no hope of reaching. Even more impressive, Strasburg threw the knee-buckler for strikes more than half of the time (16 strikes, 7 Balls, 1 ground out to 1st base, and 1 single to right.)

Strasburg's change-up would be a major league sinker for most pitchers. He threw the pitch from 89 MPH to 91.6 MPH, with excellent drop. 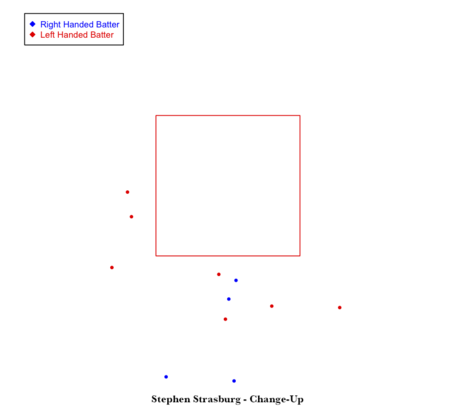 As you can see, Strasburg did not use his change-up as a strike pitch - he used it as a change of pace. Unfortunately, he left one change-up a little too close to the zone, which Delwyn Young hit for a home run (shown here as a red dot slightly below the center of the strike zone.) That change-up was also the third change-up Young saw that game. In retrospect, they went to the well one time too many with that pitch against Young.

If one particular pitch sequence defined the night, it was Delwyn Young's first plate appearance. 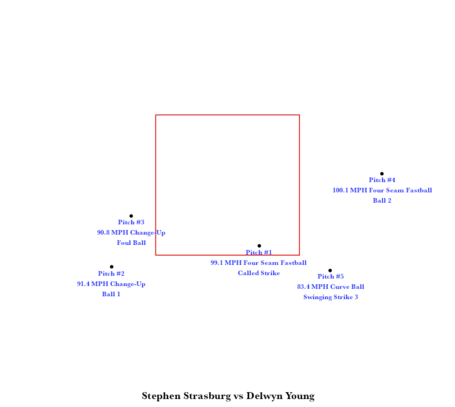 Strasburg threw his curve ball 17 MPH slower than the previous fastball. Nobody can adjust to that.

There really isn't anything that captain obvious hasn't already said about Stephen Strasburg. He had great control of 4 pitches, he threw too hard for batters to adjust, he worked the location, and was an absolute joy to watch. I can't wait for his next game.