On Sunday, Stephen Strasburg pitched his 2nd career MLB game, giving up 2 hits and 5 walks while piling up 8 strikeouts in 5.1 innings. Although Strasburg was frustrated with his performance, and even more frustrated with the dangerous mound conditions in Cleveland, it was still an excellent effort for the Nats rookie.

Here's the breakdown of the 95 pitches Strasburg threw to the Indians:

That's an increase in two seamers and a decrease in curve balls from game one, which is what we would expect, given that Strasburg likes to throw the two seamer away to lefties and the curve ball low and away to righties.

Strasburg threw the four seamer in the range of 95.9 MPH to 100.4 MPH, with an average speed of 98.51 MPH, and a median of 98.75. The range is very similar to game one, but his median and average speed was a little more than a half MPH faster against the Indians. 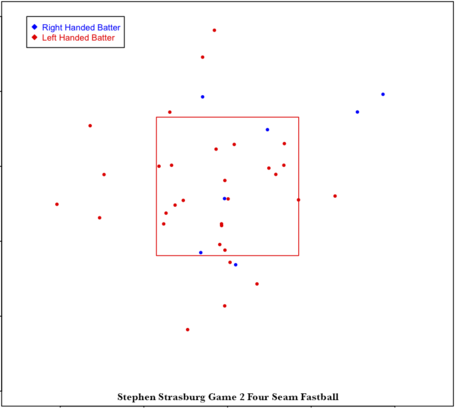 Strasburg threw his two-seamer between 94 MPH and 98.7 MPH, with an average speed of 96.27 MPH. This is a little more than 1 MPH faster than the two seamers he threw to the Pirates. 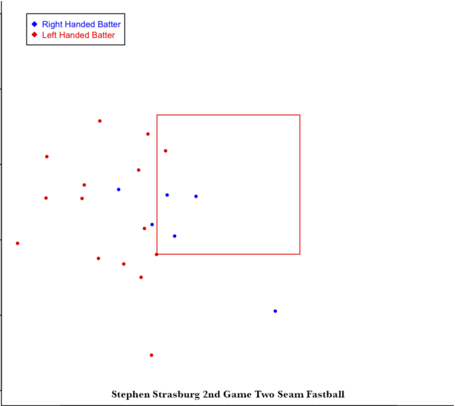 Strasburg struggled to find the zone with his two seamer. The Indians lefties only swung at 2 of the 16 two seamers that they saw. 12 pitches were balls, 2 were called strikes, one was a missed bunt attempt, and 1 was a bunt ground out to third. 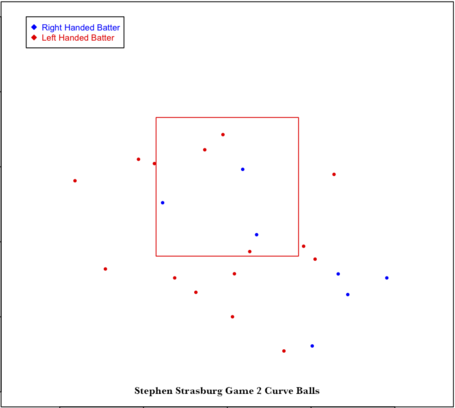 It was interesting to see Strasburg throw the curve ball to lefties. We really didn't get to see that against the Pirates. Strasburg threw 15 curveballs to the Indians lefties - 9 for balls and 6 for strikes. No Indians batter put a Strasburg curve ball in play. 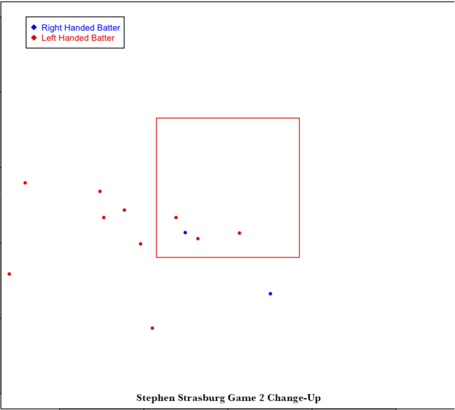 His change didn't have nearly the sink on it against the Indians as it did against the Pirates, but he threw a higher percentage for strikes.

All in all - another dominating performance from Strasburg. He gave up two hits - a 97.4 MPH four seam fastball that Carlos Santana flared to right, and 99.7 MPH four seam fastball that Travis Hafner ripped for a home run. He's faced 47 batters, striking out 22 - that's right - his strikeouts per nine innings is now a ridiculous 16.05. By comparison, Ubaldo Jimenez has a K/9 of 8.1. Strasburg's ERA now stands at 2.19, which would place him in 5th place for Major League starters if he had enough innings pitched.

Next up - Mark Buehrle and the White Sox - Friday night 7:05 PM. If you don't have tickets yet, buy them now!