As part of the Washington Nationals' efforts to give internet-based (or online only) media members access to the team, a group of writers were invited yesterday to interview the Nats' second '09 1st Round pick, Drew Storen, the newest late-inning option, who's (1-0) with 5 walks allowed and 6 K's collected in 9 games and 9.0 IP so far since making his debut on May 17th in St. Louis. The 22-year-old right-hander took questions for five minutes before Nats' outfielder Josh Willingham politely asked him to leave the stage. Here's some of what Storen had to say:

• What Should Strasburg Expect When He Gets Here?

Drew Storen: "I tell you what, I think he's already got a good taste of it coming from Spring Training, just with being around the guys and stuff, and they're really no different now that it's in season, it's a great group with a lot of young guys, but we also have a good group of veterans who know how to win, so you can have a 'youthful vibe' I guess, but you also have the experience of some veterans that will really show you the way and show you how to kinda go about your business, cause it is a little bit different here..."

• Any Sort Of Initiation?:

Drew Storen: "No actually not, I haven't had anything too bad, it's pretty standard stuff, but I just carry the backpack out to the bullpen right now, which if you compare it to some of the bookbags that rookies have taken before it's pretty tame..."

• Looking Back A Year Ago To When You Were Drafted, Can You Reflect On What's Happened Since, What You Expected?

Drew Storen: "It kinda sunk in today, cause when we showed up there was guys out here doing pre-Draft workouts, and so I was probably, almost to the day, I was here throwing, and it just kinda adds to the whirlwind experience, I guess, of being here and it doesn't soak in, it probably won't. It's hard to explain, I didn't really expect to be anywhere, cause at this time last year I didn't even know if I was going to sign, cause I still was...I don't know, I had two great oppportunities, I could have signed or I could have gone back to [Stanford], so I didn't really know where I was going to be, let alone I never would have expected being here."

• You Seem Comfortable With All The Media Attention, How Will Strasburg Handle It?

Drew Storen: "You know, the thing is about Stras, is he's such a low-key guy, and doesn't really get into that kinda stuff, so he doesn't really let it affect him. I think there was 78 or something credentials for his first start in Altoona this year, and in that setting it was unbelievable. He would warm up and there would be people climbing over each other, over other fans, to just watch and take pictures and you have cameras right here, five feet from him when he was warming up and he doesn't let it affect him, he just is able to kinda zone that out. I think he got a good taste of that in college and obviously pitching in the Olympics, he's just the type of guy that honestly, enjoys pitching and doesn't get caught up in the hype or who he is or anything like that, and you know, it's tough, but he does a great job with it."

• Are The Players As Excited About His Arrival As The Fans Are?

Drew Storen: "Yeah, I think so. We're not really excited just because we want to see him pitch, we're just excited because we know he's going to be an asset to the team and help us win, and we don't necessarily care too much about the hype or any of that stuff, you know the big thing is we know he's going to be a great addition to the team so that's kind of the big thing we're concerned with."

• What's Been Different For You On The Mound Since Your Debut?

Drew Storen: "I think the last couple of times I've been out there, it kinda toned it down a little bit, like the first couple of times I went out it was kinda so big, you know, that I kinda had to really think, 'Hey just worry about pitching here.' The only thing I noticed is that my body kinda was a little more sore after the first couple outings cause I had to throw in a different gear when you're here because of that adrenaline, that new adrenaline rush, but now that I've adjusted well I feel great. It's not too different, but it's just kind of a matter of taking a deep breath and you know, kinda relaxing and kinds getting some innings under my belt and getting my feet wet."

• Goals For The Rest Of The Season?

Drew Storen: "Just kinda the same goal I've had all year, I wanted to get here obviously, but I wanted to be a big part of the bullpen and be and impact guy, and you know, that's really the main thing. I don't really have any personal goals as much as I just want to win, and I want to be a part of the winning, that's kinda my main thing. If it means I come in and I'm a right-handed specialist against somebody in the fifth inning that's fine, if it means I'm throwing the seventh or eighth, that's fine, it doesn't matter to me as long as we're competing and winning cause that's the most fun."

• BONUS: 90 Seconds With Nats' Future Closer Drew Storen...One of Federal Baseball's DC Faithful had a question for Drew Storen that I wasn't able to ask during the interview, so I asked him on the field during BP...

Federal Baseball (FB): Having grown up in baseball, and we've all read the story since about you having met Chad Cordero when you were a kid and some other players like Scott Rolen and some other guys, have you gotten a chance to meet any of those players you'd met since you came up?

Drew Storen: "Yeah, I was actually going over to talk to Scott [Rolen] right now, so, you know Scott's actually been a great role model for me coming out of Indiana, and I've been fortunate enough to know him for many years, and he's always been a great guy to me and kind of looked up to him and how he goes about being a professional baseball player and being a good person at the same time, and obviously meeting Chad Cordero, he's the perfect role model too, cause baseball-wise I wanted to be a closer because of him, and once I got to go to college, I was like, hey, I'll be like him, pitch in the World Series, and then once I got drafted, I thought, hey, you know, I'd love to work through the minor leagues as quick as he did, so it's one of those things, I sat there and talked to him, he took five minutes of his time during BP to talk to me and it really gave me something to look up to and it was really big."

FB: Do you try do that now that you're up here with the kids?

Drew Storen: "Yeah, I mean any time you get an opportunity, you just try to help anybody out. I don't know if necessarily kids want to look up to me, but, you know, it's just, if I can help a kid out, I just know what Chad did for me, and I know what Scott's done for me, so it's always good to hopefully be able to do that to somebody else."

FB: Is Scott the first guy that you me that you're going to get a chance to talk to?

Drew Storen: "Yeah, I haven't actually met Chad yet, since I was fifteen, so it would be cool to get a chance to talk to him..."

Drew Storen: "Yeah, I saw that, and I was really excited...So actually I'm going to go over talk to Scott, and it should be cool..." 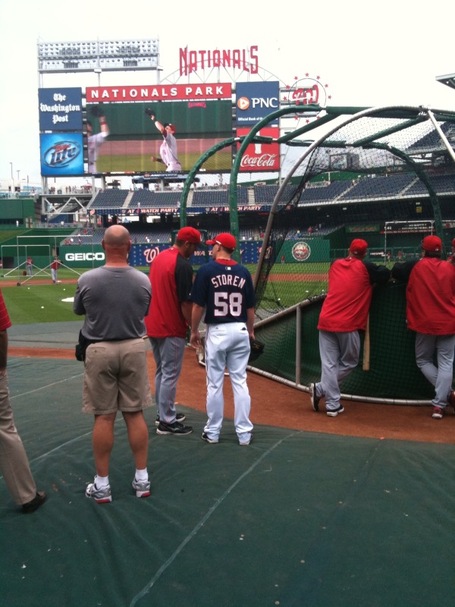