A Star is Born: Strasburg K's 14 in MLB Debut

Share All sharing options for: A Star is Born: Strasburg K's 14 in MLB Debut

These are the words of veteran catcher Ivan Rodriguez, in reference to pitcher Stephen Strasburg, the Nationals' first pick in the 2009 MLB Draft whom they selected exactly one year ago. Strasburg, who went seven-innings-strong in his MLB debut yesterday, pitched his way to a 5-2 victory in front of a sold-out crowd at Nationals Park.

The former number-one draft pick out of San Diego State University proved his worth: giving up just 4 hits and striking out 14.  As aggressive as he was, being that 16 of his first 19 pitches thrown in the big league were fastballs, he did not walk a single batter. Furthermore, he was a 2-out Delwyn Young (golf-swing) HR away from shutting out the Pirates in his first career MLB start. He fired strikes in 65 of his 94 pitches, and had Pitt guessing on every pitch.

For a couple more pictures from the game, and a post-game wrap-up, please:

Was it the 97+ mph four-seam fastball which he consistently blew by the Pirates that made him effective? Or was it  how he used the scorching heat to set up his secondary pitches? The Pittsburgh batters looked completely baffled at the plate, failing to make contact on many of Strasburg's pitches.

The young Nationals pitcher was lethal when ahead in the count. Strasburg had a plethora of "out-pitches" to work with, including his patented breaking ball ("slurve") and his 90 mph 'change-up' (it's nice when you can downshift to 90 mph, isn't it??).  Furthermore,  many fans pondered how effective he could have been if given a generous strike zone, and felt the young phenom was being 'squeezed' at times. Long-time season-ticket-holder Ryan Locks shared his thoughts:

"Unbelievable," Locks said, "Imagine what he could have done if [he was] given a proper zone. Move over Ovechkin, we have a new superstar in DC."

On the offensive side of the ball, sluggers Ryan Zimmerman and Adam Dunn provided the necessary run support en route to the Nationals' victory. The two combined for 6-8, 4 runs, and 3 RBI's. Josh ‘Willing-hammer" Willingham also added a HR.

According to ESPN, Strasburg's 14 strikeouts were the third-most by any pitcher in history in a big league debut -- behind only J.R. Richard (15) in 1971 and Karl Spooner (15) in 1954. He also set the Nationals' "all-time" franchise record for most strikeouts in one game.

Oh BTW, according to the radar gun at National Park, Strasburg threw a 100 mph fastball to strikeout Jeff Karstens and close out the 5th inning. That's just unfair! 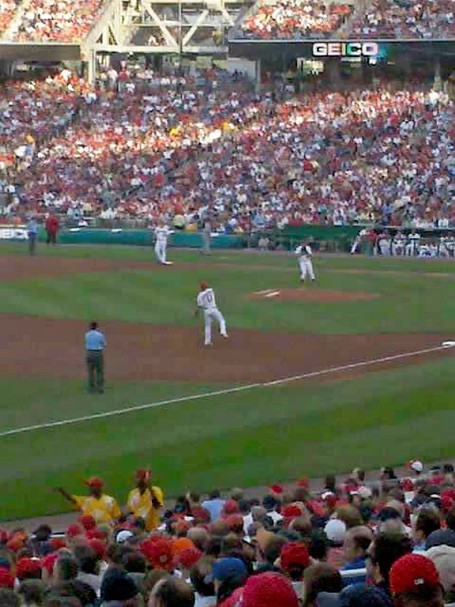 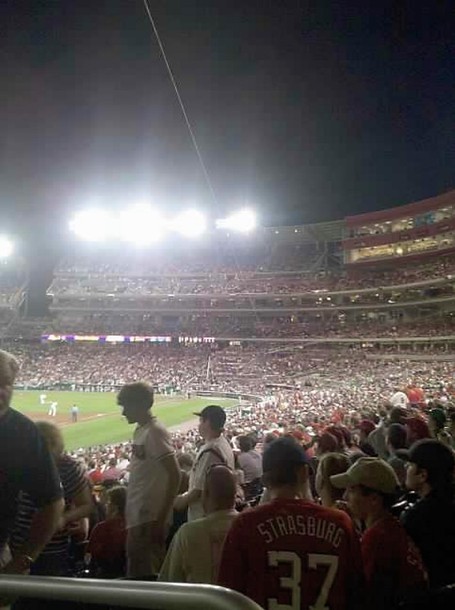 Source for Rodriguez quote via http://washingtonpost.com