Souldrummer: Miguel Batista's performance last night was truly awe-inspiring, perhaps in the 5 man rotation of top pitching performances this year to rival Olsen's near no-hitter, Livo's two complete games, and the Strasburg debut. In terms of shock and awe and likelihood of actually happening, certainly it rivals these performances. In tribute to their hero, the Miguel Batista Fan Club has released their opening statement to these events. They have informed me that they will release future statements in this Fanpost and encourage additional comments, images, tributes, and statements of appreciation here as well. The Miguel Batista preliminary news release after the jump:


At this moment we are currently working on adjusting our marketing plans and application process to handle the new influx of interest on our hero. We've never had media requests. To be truly honest, we've never actually received an application before. National coverage is unprecedented and we wish to consider a careful response to avoid mismanaging this a la "Joe the Plumber" to cite a recent DC analogy. A careful, measured plan is appropriate to keep expectations within reason. Our founder is working on a formal statement, but in true DC fashion The Miguel Batista Fan Club continues to work with other organizations and fan club groups to best craft their response. What we've come up with so far.
Here is the new cover photo for the Miguel Batista Media Guide 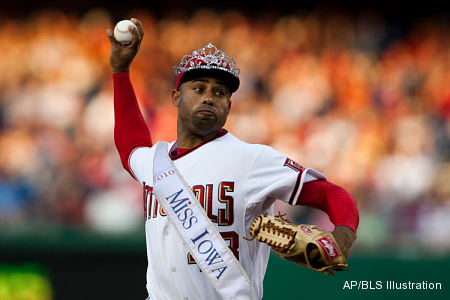 Likewise, we are currently running a fan contest to suggest a new icon that reflects our heroes newfound status. Former iconz tried to highlight his novelistic career in an effort to focus on any gifts outside his  overscrutinized pitching performance. Alternately, they went with the simple Dominican Flag, an attempt to focus on his simple love of country and his fellow man. But now, he will forever be known as the Miss Iowa of Natstown. The Miguel Batista Fan Club is currently offering a Miguel Batista Miss Iowa contest to connect with the public. A new icon to inspire others who wish to pay tribute to their hero has already been submitted by souldrummer of Northeast DC and remains the leader in the clubhouse.
Dani Reeves, Miss Iowa 2007

We remain committed to helping others appreciate the hidden talents of Miguel Batista. Already we feel a kinship with such other Natstown Fan Clubs as The Saul Rivera Fan Club, The Ray King Fan Club, The Joey Eischen Fan Club, and The Mike MacDougal Fan Club. Those fan clubs made mistakes in marketing and club management when the pressure of the bandwagon grew too great and collapsed in horrible roadside accidents. We at the MIguel Batista Fan Club wish to continue to represent our hero in an accurate and fair light, and we are determined to follow him wherever he goes, be it another MLB Team, The Syracuse Chiefs, The Harrisburg Senators, or even to his hardearned retirement as a writer in The Dominican Republic. As part of The Plan, we are making sure that we handle his recent celebrity with care. In today's media environment, today's Mayor of Natstown can find himself locked in Minor League Prison if "The bitch sets him up." As always, we continue to be inspired by the performance, class, and humor of our hero and we encourage all to take this day and this space to appreciate the greatness that is Miguel Batista.