5. Strasburg To DL, Olsen Back On Hill: Nats' lefty Scott Olsen was put back on the roster this morning when the Washington Nationals officially placed Stephen Strasburg on the 15-Day DL with "mild inflammation" in his right shoulder. Olsen, making his first start for the Nats since May 22nd when he himself was placed on the DL with "left shoulder tightness" throws a quick scoreless first in his return to the mound, 7 pitches, 4 strikes, three groundouts to Ian Desmond at short. Not a bad start...

4. Ian "Franking" Desmond!! - Ian Desmond's 7th HR of 2010 is the second of his career against Braves' right-hander Derek Lowe and it puts the Nats up 2-0 in the second one at bat after Michael Morse's RBI groundout scored Adam Dunn from third after the Nats' big middle-of-the-order bat doubled to center and over the wall for a ground-rule to start the inning. Desi and Morse combine again in the fourth when Morse is hit by a fastball from Lowe and Desi doubles him over to third with a ground-rule double to left-center. Wil Who? Wil Nieves!! RBI line drive to center, two runs score, 4-2 Nats.

3. DIAZ!!!!!: Scott Olsen was through three scoreless and the left-hander got a fly ball from Chipper Jones for the first out of the fourth before issuing a one-out walk to Troy Glaus. Matt Diaz makes him pay. A 91mph heater inside and high is destroyed. 2-2 game on Diaz's HR to left.

2. E: 24, 81: Nats' shortstop Ian Desmond's having a great game, making a few solid plays at short. Desi hits a HR and double off Lowe and is looking sharp til a sharp grounder by Matt Diaz in the sixth eats him up and gets by him. The official scorekeeper charges Desmond with the error, no.24 on the year for the 24-year-old shortstop, number 81 overall for the Nats who tie the Marlins for the league-lead in E's...Olsen throws a pitch by Nats' backstop will Nieves that's ruled a passed ball, Diaz moves to second and scores when Omar Infante singles to center off Olsen. 4-3 Nats as Desmond's E hurts...A rain delay ends Olsen's outing after he finishes the top of the sixth, Olsen's Line: 6.0 IP, 5 H, 3 R, 2 ER, 2 BB, 1 K, 81 pitches, 52 strikes, 8 groundouts, 9 flyouts.

• QUOTE OF THE DAY: This one comes from Washington Post writer Adam Kilgore, who talked to Nats' Pitching Coach Steve McCatty about Olsen's return to the mound for the first time since late May and posted the following on the Twitter:

@AdamKilgoreWP : "McCatty on Olsen: "He's got that little bit of swagger. His stuff is good. But he thinks he's a left-handed #Strasburg out there."

1. SHAKE N BAKE!!!: The Nats hold the one-run lead through seven and a half, and then Adam Dunn gives them an insurance run when he blasts his 24th HR to left center on a 90 mph first-pitch fastball outside from Braves' reliever Takashi Saito to put the Nats up 5-3 over Atlanta and set Matt Capps up for the save. Matt Capps comes on to close it, Brian McCann grounds out, Melky Cabrera grounds out, Eric Hinske K's swinging at a 96 mph 1-2 fastball...Will Dunn be a Nat when the weekend is over? Will Capps? Nats take two of three at home from the Braves, and welcome the Phillies and new right-hander Roy Oswalt tomorrow for a three-game weekend series with Philadelphia?

Jim Riggleman: "His name is mentioned with four or five teams on a daily basis, and a lot of speculation, a lot of it not accurate, but you do look up in the stands and see scouts from various teams and you figure they're looking at [Adam Dunn] and [Josh] Willingham for the most part, so, if it happens we'll deal with it, but certainly we'd like to keep Adam here." 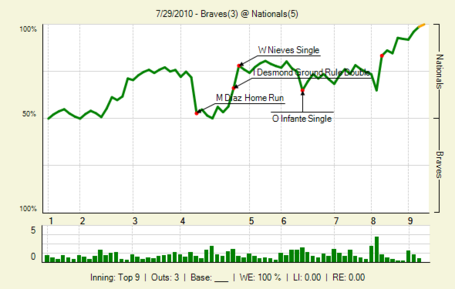