In an article entitled, "Montreal Expos, Forgotten by Many, Are Reuniting in Cooperstown", which I've cited often in the months since former Montreal Expos' great Andre Dawson was elected to the Baseball Hall of Fame last winter, New York Times' writer Tyler Kepner, spoke to Dawson's teammate in Montreal and fellow Hall of Famer Gary Carter about the fact that the Washington Nationals had decided to (for the most part) ignore the French-Canadian roots of their franchise:

"That’s really the sad part," Carter said. "At least recognize and embrace the fact that they were in Montreal for 36 years."

When Mr. Carter enters Nationals Park tonight to catch the ceremonial first pitch thrown out by Mr. Dawson, who's being honored for his induction into the Hall, he might be surprised to realize that within a year after he first asked to simply be acknowledged, he's become a permanent fixture in the nation's capital's Nats' home park, with his name (alongside the Expos' eMb logo) the first in line in a new "Ring of Honor" featuring names from the franchise's and DC baseball's history, which wraps around the facade above the first level of stands behind home plate. 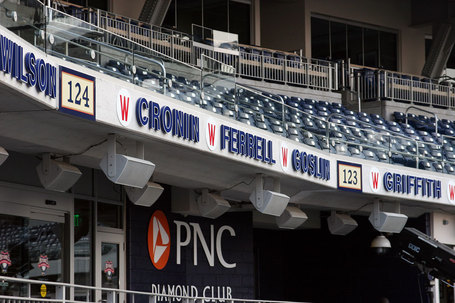 The Nats developed the following guidelines in deciding who would be recognized in the new "Ring of Honor" at Nationals Park:

The complete list of names, compiled by Ian Koski of Nationals Daily News in an article entitled, "DC baseball greats' names to be displayed at Nats Park":

"From the Expos, Gary Carter and Andre Dawson will have the first positions on the first base side at section 126.

This mix of a city's baseball history in all its permutations with the franchise's history is truly unique. While the Minnesota Twins and Texas Rangers have in the past held events (wearing throwback jerseys or holding bobblehead giveaways)  which recognize their franchise's history in the nation's capital, and the Nats, Twins and Rangers all recognize statistical achievements within their respective franchises, the Nationals are the first to embrace and publically honor the players themselves, and not without some opposition.

As I wrote in a post recently imploring the Nationals' Expos past:

MASNSports.com, Phil Wood, has been one of the most eloquent voices of opposition to the idea of recognizing the Expos' past of the franchise in the nation's capital, as he expressed in an article entitled, "'Spos Not", in which he noted that while Frank Howard's number 33 hasn't been worn by any player in DC since baseball's return, both Dawson's number 10 and Tim Raines' number 30, which the Expos retired, have been handed out to Nationals' players. In the article, Mr. Woods also recounts a phone call with a member of the Federal Baseball community who called in to the "Nationals Talk Live" post game show to ask for the writer's take on whether or not the Expos' past should be a part of the Nationals' present:

"I replied as I have many times: I don't see much reason to do it. When the franchise moved to Washington in 2005 and left the name "Expos" in Montreal, I think they left behind that legacy. Yes, the Expos had some outstanding players in their 1969-2004 history; but not many Washington-area baseball fans can really relate to that. Heck, the number of area fans who still relate to the Senators is dwindling, but they still far outnumber Expos' aficionados in the mid-Atlantic."

It might, therefore, seem like having Mr. Wood take part in the ceremony today is an odd decision, but the pairing of a (if not thee) repository for all of DC baseball history with the Montreal Expos' players makes sense in light of the decisions the Nationals have made as to how the Expos would be honored. While raising the same issues he's mentioned previously, in an article by Washington Post writer Dave Sheinin entitled, "By honoring Andre Dawson, Washington Nationals acknowledge complicated history", Mr. Woods acknowledge that he understands and, in fact, empathizes with the plight of the remaining Expos fans:

"I have great empathy for the fans in Montreal who lost their club," Wood said. "I know exactly what it feels like. To hang on to those records means something to those people. But I can't imagine there are more than a few hundred people [in Montreal] following the Nationals on a regular basis.

"'I think it's nice, baseball-wise' to honor Dawson, Wood said, 'because it probably makes more sense for the Nationals to do it than for anyone else to do it, since he spent so many years with franchise. But I really don't think D.C. fans have any feel at all for guys who played for the Expos.'"

If empathy isn't your thing, why not just take a quick glance at the Nationals' roster. The starting center fielder these days, Roger Bernadina, was a prospect signed by the Montreal Expos. Starting shortstop Ian Desmond was an Expos' Draft pick. Ryan Zimmerman was selected with the fourth overall pick in 2005 which would have made him a Montreal Expo if baseball hadn't done its best to devalue the first truly international franchise and force its relocation. Livan Hernandez bridged the gap between the Expos and Nats, pitching for two seasons in Montreal before becoming the Nationals' first ace...and even the Nats' rubber-armed reliever Miguel Batista was brought to the majors by Montreal.

The Washington Nationals are doing a good thing here. The Montreal Expos will not be relegated to the history books and two or maybe three plaques on the wall in Cooperstown, NY. The history of the franchise now has a home, and it's where it should be, in the one city that directly benefited from the Expos' demise. Thanks, Nats. 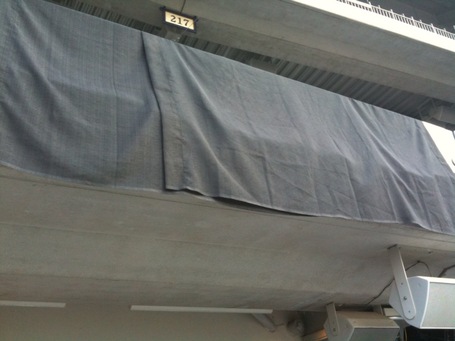