"He's a great guy, who deserves to be in the Hall of Fame with all the numbers he put up, and it's great he did it with the Montreal Expos," former Expos' and current Nats' pitcher Livan Hernandez, who spent one season playing alongside Andre Dawson with the Florida Marlins in 1996, said of the Hall of Fame outfielder who was honored yesterday in Nationals Park. According to Livan, Dawson's an ambassador for the game, "Outside of baseball I think he's a really good person who can show people how to play the game right." "He was the consumate professional," Gary Carter, Dawson's teammate in Montreal from 1976-1984, said of the Hawk. "He played the game hard every day, didn't want a lot of fanfare, he was the type of guy that just came out and did his business. He just always played hurt and played hard, and I tried to do the same and it was just the way were brought up as players." Ian Desmond, an Expos' Draft pick in 2004 who was born in 1985 when Dawson was in his 10th professional season, and was just eleven years old when the veteran outfielder finally retired in 1986, said he didn't have any one specific memory of watching Dawson play, but, "I just know he was a bad dude, and that's what I aspire to be, someone that makes the Hall of Fame," and will one day be honored as the now-56-year-old Dawson was yesterday in Nationals Park when his name was added to the Ring of Honor behind home plate along with the great names from the franchise's and nation's capital's baseball history.

The moment he found out he was elected to the Hall of Fame, Andre Dawson says, was a, "...very humbling experience. I got kind of numb right away and didn't really have a response, didn't know what to say. I felt that it was a long time coming, and to actually get that phone call and hear the voice on the other end was very, very humbling." Asked what it was like to be honored in Nationals Park, the veteran of 21 major league seasons, 11 of which were spent with the Montreal Expos who'd eventually become the Nats, Dawson said that, "For me, any time someone extends that effort and pays homage to my career, it's very gratifying...I never played here [in D.C.], but I understand the history and connection, and I'm most grateful."

Dawson told reporters that the move by the Nationals to finally recognize their Expos' past was very important to him, "I went in [the Hall of Fame] as an Expo...and I understand what tonight is about and just want to say that I'm very grateful." Tears rolled down Andre Dawson's face when his name was revealed in the Nationals Park Ring of Honor. His former teammate, Gary Carter, wiped the tears from Dawson cheek. The Hall of Fame duo won't be relegated to the record books, or the Hall of Fame as Montreal fans may have feared, the Hawk and the Kid, thanks to the Washington Nationals, finally have a home again. 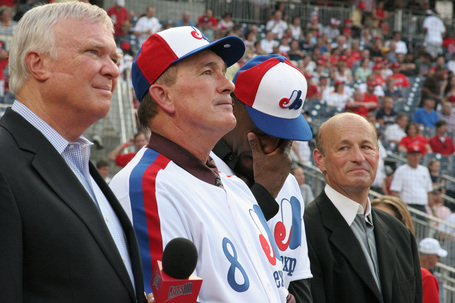