Share All sharing options for: Washington Nationals 6-2 Over Atlanta Braves On Unlikely Heroes Day In Atlanta.

5. Why Bernie In Left Again?: With Josh Willingham DL'd and headed for season-ending surgery, and Adam Dunn getting a break from his struggles at the plate and first base, the Nationals have Roger Bernadina starting in left for the first time since May 5th, and Willie Harris in right with Michael Morse in at first for Dunn in the series finale. Willie Harris misplays the first liner hit his way today, but it doesn't cost Nats' left-hander John Lannan who throws two scoreless as the Nats get out to a lead...

3. Morgan's Back: Nyjer Morgan sends a two-out single screaming back up the middle, nearly removing Derek Lowe's cap, then the Nats' leadoff man and center fielder steals second to set himself up to score when Ian Desmond comes through with the second-straight two-out hit. 2-0 Nats. Morgan singles again to start the Nats' sixth, takes second on a wild pitch, third on a sac bunt by Ian Desmond and scores on an RBI double by Roger Bernadina to make it 3-0 Nats. 4-0 when Bernie scores on an RBI single by Ryan Zimmerman. Morgan ends the game 2 for 5 with two runs scored and his 30th stolen base. But Bernadina's not going to bat third every day, so who leads off now that Morgan's back?

2. Lannan's Got Grounders and K's: 8 groundouts, 1 flyout, 5 K's, 1 BB, 2 ER and 5 hits allowed in 5.1 IP. John Lannan let runners on in four of his first five innings on the hill without giving up a run, and came back out for the sixth with only 79 pitches thrown, only to implode. Lannan gives up back-to-back singles by Omar Infante and Jason Heyward and a one-out, two-run double to Matt Diaz that gets Atlanta on the board, 4-2 D.C., and Lannan walks Brian McCann before Nats' Skipper Jim Riggleman decides he's had enough after 105 pitches, lifting the lefty for right-hander Joel Peralta with runners on first and second and Alex Gonzalez due up with one down. Gonzalez pops out foul of first, but Diaz was running on the pitch, 3-6 double play, fly ball to Morse off first and Diaz doubled up at second. Nats lead 4-2 after six and 6-2 after Adam Kennedy's leadoff walk and Willie Harris' two-run HR in the ninth...

1. Ramos Fever: The Twitterers were impressed with the Nats' catcher Wilson Ramos' first two at bats this afternoon, in which the 22-year-old catcher acquired in a deadline deal for Matt Capps took a total of 18 pitches, fouling off three two-strike pitches and taking two balls from Derek Lowe for a full-count in the first before he K'd looking and taking the Braves' right-hander nine pitches deep in his second AB before flying out to center to start the fifth. Lowe got the catcher swinging on four pitches in his third plate appearance as a Nat in the seventh, and then Ramos showed off his defensive skills (really Martin Prado dropped a horrible bunt down) when Ramos jumped up to cut down the lead runner at third on a sac bunt attempt by Martin Prado in the eighth, after Tyler Clippard'd issued back-to-back walks to start the Braves' half of the frame. Clippard gets a flyout from Matt Diaz and Sean Burnett gets a line drive to first from Brian McCann to end any threat...And The Nats' Flat-Brimmed Closer Drew Storen comes on in a non-save situation and records a quick scoreless ninth. 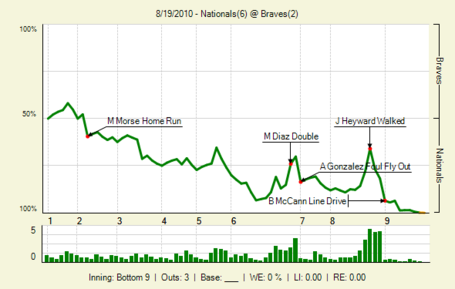