Chicago Cubs 9, Washington Nationals 1. It Was That Bad.

Share All sharing options for: Chicago Cubs 9, Washington Nationals 1. It Was That Bad.

5. Mr. National Himself: Nats' right-hander Livan Hernandez starts the night with a 1-2-3 first, getting fly balls from Blake DeWitt and Marlon Byrd with a swinging K on a 62mph cartoon curve to rookie shortstop Starlin Castro in between. The second starts with a walk to Aramis Ramirez and a single by Xavier Nady to put two on with no one out. The Nats' 35-year-old starter strikes Tyler Colvin out, gets Alfonso Soriano looking at a 2-2 fastball knee-high and outside and then walks Geovany Soto with two down to load the bases before getting a grounder to the mound from the opposing pitcher to end a scoreless second...without breaking a sweat.

4. I Think He's Sweating Now: Livan Hernandez tries to throw a 1-1- change low and inside to left-hander Blake DeWitt, who launches it to right for a 1-0 Cubs' lead in the third. Starlin Castro singles but is thrown out by Pudge, then Livan hits Marlon Byrd, walks Aramis Ramirez and hits Xavier Nady to load the bases for Tyler Colvin, who singles in two, 3-0 Cubs. Alfonso Soriano flies to right, a blooper toward the line, Willie Harris dives for it and misses. 2-run triple, 5-0 Cubs. 6-0 Chicago in the fifth when Cubs' starter Casey Coleman collects his first major league hit, lining to left for his first RBI. Livan's done. Livo's Line: 4.1 IP, 10 H, 6 R, 6 ER, 4 BB, 5 K's, 121 pitches, 63 K's.

3. Rob Dibble Is Not Popular On Twitter: I've tried in the past to stay away from the Rob Dibble-bashing, because I really don't see the point. I've often argued that I find him no more annoying than any of hosts of the many NY sports talk radio shows I've grown up listening to, or maybe one of the callers to those shows is a better comparison, but when he says Stephen Strasburg should, (as quoted by the Washington Post's DC Sports Bog's Dan Steinberg on Twitter @DCSportsBog), "'Suck it up, kid....Stop crying, go out there and pitch. Period.'" I have a hard time not saying anyth-...Well, Twitter's Pretty Much Said It All..And that wasn't even the worst thing Dibble said. (And I'd swear this was an Onion-esque parody if it wasn't in the Washington Post). Dibble goes on to reveal in his words that he's been thinking about this for a while, as he chastises the young starter, saying, "You're gonna be out there on the mound sometimes, the mound is gonna be terrible and the dirt is gonna be a little loose and it might not be so great. You can't constantly be complaining over every little thing," clearly referring to the mound issues Strasburg complained about in Cleveland earlier this season, which had the then-21-now-22-year-old no.1 overall pick nearly hyperextending his knee when his left foot kept sliding forward on the loose dirt. Dibble's own broadcast's images confirmed this, in slow-mo... (Good job on that, MASN. Sorry about this!) And again now, knowing that reports everywhere noted the fact that Strasburg thought he could pitch through the pain, and wanted to stay in, only to be overruled by his Manager, Dibble is accusing the Nats' pitcher of being soft. Hit him with a scorebook for me, Bob. The only thing that could make this night worse...No, not him...

Jim Bowden: "My feeling is they should shut [Strasburg] down for the rest of the year. He's got enough innings. He's had a good season. He's gotten a taste of the big leagues. He's shown what he can do. And for the Nationals, you're not going anywhere. Shut him down and get ready for next year, I think that would be the best plan for Stephen Strasburg at this point, NOW! For Nationals fans, Get ready! Get excited! Because once they place [Strasburg] on the disabled list today or tomorrow, which I think they'll be smart enough to do at some point, Jordan Zimmermann will make his debut. (ed. note - "It's not his debut.") The pitcher that was compensation for Alfonso Soriano leaving..."

Enough. If I'm listening to Mike Rizzo talk about the pitcher he got in return for Adam Dunn walking three years from now...

2. Zimmermann For Strasburg: It was pretty much assumed, but finally confirmed during the game last night. According to MASNSports.com's Ben Goessling on Twitter (@MASNBen), 24-year-old '07 2nd Round pick Jordan Zimmermann will be taking Stephen Strasburg's spot in the rotation on Thursday, starting in the Majors for the first time since he underwent Tommy John surgery last summer.

1. His Second Start? Cubs' right-hander Casey Coleman gives up a single to Ryan Zimmerman after Adam Kennedy reaches on an error by Blake DeWitt, but gets out of the first inning when Adam Dunn K's swinging and Roger Bernadina flies out to right. Bernadina's walk in the fourth provides the only runner the Nats put on from the second through the sixth, but in the seventh the Nats finally chase the rookie right-hander. Coleman gives up a single to Adam Dunn, a double to Bernadina, and then an RBI groundout by Pudge Rodriguez scores Dunn's pinch runner Michael Morse from third. Coleman's Line: 6.1 IP, 3 H, 1 ER, 2 BB, 3 K's, 103 pitches, 62 strikes. The Cubs support him with 15 hits and 9 runs in the 9-1 win over Washington... 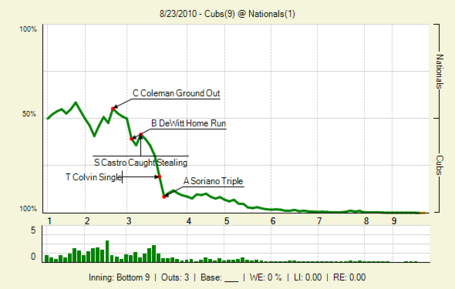