5. soriANO!! - It was 2006 all over again when Alfonso Soriano destroyed a hanging slider from John Lannan in the Cubs' second to put Chicago up 3-0 early a night after an 8-1 game one win in Nats Park. The Nationals' outfielder-for-a-year hits his third HR in Nationals Park to go along with the 24 the then-30-year-old outfielder hit in RFK Stadium when he spent a season as the Nats' left fielder. During tonight's game the announcement was made that one of two players the Nationals drafted with the picks the Nats received in return for letting Soriano walk will return to the hill when Jordan Zimmermann makes his first major league start in over a year in Thursday's game against St. Louis. Quick Historical Recap:

"Alfonso Soriano's departure as a free agent after playing the '06 season out in DC, gave the Nats two pick in the '07 Draft, which combined with the picks they'd received from Jose Guillen's free agent departure brought the Nats four draft picks in the first two rounds of the '07 Draft that they used to select LHP's Ross Detwiler (with their 1st Round pick) and Josh Smoker with the "sandwich" pick between the 1st and 2nd Round, OF Michael Burgess with the "Guillen-sandwich pick", and RHP Jordan Zimmermann with the second compensatory pick for Soriano."

4. E: 98 - A half-inning after Ryan Zimmerman drives in a run with a single to center off Carlos Zambrano to make it 3-1 Chicago, an E costs Nats' lefty John Lannan, who gives up a two-run blast to right on a first-pitch slider he leaves up for Cubs' center fielder Tyler Colvin's 19th HR of 2010 after Alberto Gonzalez's errant throw to first pulls Adam Dunn of the bag on an Alfonso Soriano grounder that should've been the second out of the Cubs' fourth. 5-1 Cubs after four. Lannan's out after 5.0 IP, having allowed 7 hits, 5 runs, 4 earned on 2 HR's. 83 pitches, 51 for strikes for Lannan.

3 A. 11 In A Row: Michael Morse's one-out single to center in the seventh ends a streak of a eleven-straight outs for Cubs' right-hander Carlos Zambrano stretching back Zim's RBI single in the third. The troubled Cubs' starter goes 7.1 IP, his longest outing of the season, and the first time the 29-year-old 10-year vet has pitched into the eighth inning since last September 25th's 3-0 Cubs' win over the Giants. Zambrano throws 108 pitches, 68 for strikes and allows 5 hits, 1 ER and 1 BB while striking out 8 and getting 9 groundouts and 6 flyouts...

3 B. Collin Balester: He's probably just up for one more day, but for once Collin Balester used his chance to make a good impression. The 24-year-old right-hander entered tonight's game in the eighth, got a groundout from Starlin Castro with a 1-1 curve and got both Xavier Nady and Aramis Ramirez swinging to end a quick 1-2-3 inning. Balester starts Nady 3-0 and strikes him out with a full-count fastball in the seventh pitch of the at bat. Aramis Ramirez only lasts four pitches before Balester puts him away with a 1-2 curve that makes the Cubs' third baseman look bad.

2. One Shot: Down 5-1 after seven and a half innings, the Nats finally chase Carlos Zambrano when he gives up a one-out single to Nyjer Morgan. Cubs' left-hander Sean Marshall comes on and gets a groundout from Kennedy before issuing back-to-back two-out walks to Ryan Zimmerman and Adam Dunn to bring the tying run to the plate in the person of Nationals' left fielder Roger Bernadina, who's 0 for 3 with 2 K's...So Nats' Skipper Jim Riggleman goes to the bench and tells Ian Desmond to pick up a bat. The Nats' 24-year-old infielder has been out for two games with an injured thumb, but he's available to hit. The Cubs lift Marshall for closer Carlos Marmol who gets Desmond with three pitches, the third an 0-2 slider outside that gets Desmond punched out by the first base ump when he can't hold his swing.

1. Second Chance: Marmol's a little wild, to put it mildly. The Nats decide not to chase in the ninth, with Michael Morse walking in front of Alberto Gonzaez, who singles, and Wllie Harris, who walks to load'em up for Adam Kennedy. Kennedy lines a 3-run double to right and when Ryan Zimmerman steps to the plate, he represents the winning run. Zim gets five-straight sliders from Marmol and then gets the fastball he wants, which he lines to right and into Kosuke Fukudome's glove to end the Nats' second-loss-in-a-row to Chicago. 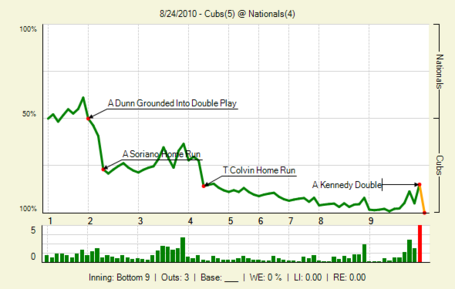