Share All sharing options for: St. Louis Cardinals 4-2 Over Washington Nationals On Dark Day In D.C.

5. Zim(n)'s Advice For Stras: Washington's 24-year-old right-hander Jordan Zimmermann underwent elbow reconstruction surgery last August 19th and made his first major league start in over a year last night, so it only made sense he's be asked for advice about what the Nats' 22-year-old right-hander Stephen Strasburg can expect after it was determined that the Nats' '09 no.1 overall pick has a "significant tear" of his Ulnar Collateral Ligament which will likely require Tommy John surgery within the next couple of days. 1500 WFED's Dave Jageler, the voice of the Nationals on the radio along with cohost Charlie Slowes, had Zimmermann on the pregame show last night, where he was asked what if any advice he would offer his fellow future-top-of-the-rotation starter:

Jordan Zimmermann: "...keep your head up and just keep battling through and work hard and do all the work that they tell you to do, and you'll be fine and you'll come back in no time. The first two months is the hardest part cause you can't pick up a ball, and I mean, once you start throwing the time just flies and before you know it you'll be back...

"It took me a couple weeks to get over the point of, 'I'm going to be done for at least a year, maybe even 18 months, and I just kept telling myself it's a year and you're going to be through this in a year, and just keep working hard every day and you'll be just fine."

4. Don't Shake Off Pudge!!: Nats' lefty Scott Olsen stands on the mound with two down in the top of the first, staring in at the NL HR leader, Alberto Pujols, who hit the 400th HR of his 10-year career last night in Nationals Park, and his own catcher, Ivan "Pudge" Rodriguez, who's holding down signs he doesn't like. Olsen shakes of a few pitch calls from the Nats' Future Hall of Fame backstop and then hangs a 2-2 slider he wants to throw that's sent 15 rows back into the stands in left for a solo HR, Pujols' 35th of the year and the 401st of his career. 1-0 Cardinals early.

3. E: 100-101: A grounder to first from Cards' starter Jaime Garcia gets booted by Nats' first baseman Adam Dunn, who throws from his knees, and right by first for the 100th error of the Nats' 2010 campaign and the first of two errors in the Nationals' third which would cost them the game. (E: 100) Scott Olsen starts Allen Craig with a strike, then throws four-straight balls for a walk and two on with no one out. St. Louis' center fielder Jon Jay tries to lay down a bunt, but comes up empty and Pudge Rodriguez tries to catch the Cards' pitcher off second but throws it through both the runner and shortstop Ian Desmond to let Garcia take third. (E: 101) Jon Jay then singles to right to score the Cardinals' pitcher for a 2-0 Cards' lead. Olsen gets a DP grounder from Albert Pujols, but surrenders a two-out RBI single to Matt Holliday and it's 3-0 Cards after three innings of play.

2. 2,800: Pudge Rodriguez's line drive single to right in the sixth is his only hit of the night in 5 AB's in which he strands 4, but it's a big one, and it's collected and tossed into the Nats' dugout for posterity's sake as the 38-year-old Future Hall of Famer gets hit number 2,800 of his 20-year MLB career to bring him within 200 hits of his stated goal of 3,000 career knocks. Pudge's 89th hit in 331 AB's this season is followed by Justin Maxwell's bloop single to center, his first hit in 11 games and only the third hit for Maxwell in 32 games stretching back to an April 20th game in Colorado. Kevin Mench joins Pudge and J-Max on base when he takes a one-out walk, but Adam Kennedy and Ian Desmond pop and ground out, respectively, and leave the bases loaded with the Nats still down 3-0.

1. MOR-GAN!!!!!!!: The excitement of Nyjer Morgan's one-out single in the eighth was short-lived as the Nats' center fielder gets picked off first almost immediately by Cardinals' reliever Kyle McLellan. When Willie Harris followed with a solo HR in the next at bat it seemed even worse, though there's no guarantee Harris gets the same pitch to hit with a man on base. Ian Desmond doubles (his 22nd) to lead off the ninth, but Cards' closer Ryan Franklin gets the first out of the inning when Ryan Zimmerman flies out to deep center, allowing Desmond to take third and score on a wild pitch in the next AB before Franklin strikes out Adam Dunn for the second out of the Nats' ninth. Michael Morse keeps hope alive with a two-out triple, and Roger Bernadina takes a two-out walk, but Pudge Rodriguez's weak grounder to first ends the game. The Nats' go a combined 1 for 12 w/ RISP, leaving the bases loaded in the second, (when Olsen K's), the third (when Roger Bernadina K's swinging after back-to-back two-out walks load the bases), and the sixth (when Kennedy and Desmond fail to convert a bases-loaded one-out chance). Team LOB = 14. 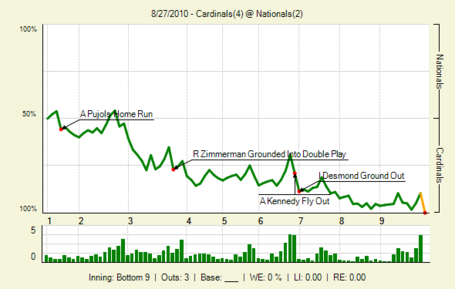