5. Mr. National Struggles: The RBI ground-rule double by Albert Pujols that scored Skip Schumaker after he started the game with a single can be excused since it was a soft fly down the left field line that dropped in fair after Roger Bernadina made a sliding attempt and missed, but the two-run blast by Jon Jay that ends up in the upper deck in right is harder to take, coming as it does with two down in the first on a hanging 1-0 slider that's begging to be crushed. 3-0 Cards before the Nats come to bat...

4. Bobble Pudge: After Ryan Zimmerman and Adam Dunn both fly out, the six and seven hitters get the Nats on the board. Michael Morse lines a double off the out-of-town scoreboard in right-center and Ivan "Pudge" Rodriguez collects hit no. 2801 when he rips a single through short to score Morse from second and make it a 3-1 game after two innings of play on Pudge Bobblehead Night in Nationals Park.

3. Get'em Radison!!! Livan Hernandez and Adam Kennedy start the Nats' third with back-to-back line drive singles and Ian Desmond lays down a perfect bunt that rolls toward third, the Cards' pitcher, Kyle Lohse, throws to first and hits Desmond. Livan scores on the throwing error, Kennedy comes arou---What? The home plate ump calls Desmond out for being on the inside of the first base line even though the throw came from third and hit Desi well in front of the bag. Yes it's the rule, he was out of the path, but that's much easier to take if he's hit in the back by a throw from the catcher. Batter interference is called, correctly. Jim Riggleman argues. Nats' first base coach Dan Radison's ejected, and Scott Olsen gets himself tossed from the dugout somehow. Both runners back to their bags. First and second for Zim. Ryan Zimmerman gets the Nats their run back with a line drive single to right, however, 3-2 Cards, and Adam Dunn's two-run double to left puts the Nats ahead 4-3 and it's 5-3 when Morse lines Dunn in from second. Don't make the Nats angry...

2. SHAKE N BAKE!! SHAKE N BAKE!! After the Cards tie it at 5-5 in the top of the fifth on RBI doubles by pitcher Kyle Lohse and former Nat Felipe Lopez, Adam Kennedy and Ian Desmond go down quickly in what looks like it will be a quick bottom of the fifth for Lohse. Roger Bernadina hits a trademark™ two-out single back up the middle and Ryan Zimmerman follows with a grounder through short off a diving Pedro Feliz's glove. Two on, two out for Adam Du--SHAKE N BAKE!! SHAKE N BAKE!!! Three-run HR!! Dunn's first since August 11th when the Marlins were in DC. 8-5 Nats on Dunn's 32nd HR.

1.5. Livan's Done: A shaky first is followed by three scoreless before Livan Hernadnez gives up the tying runs in the fifth. Hernandez throws a quick 1-2-3 sixth and bats in the bottom of the frame, but Nats' Skipper Jim Riggleman lifts the veteran right-hander when he gives up a one-out opposite field single to pinch hitter Randy Winn in the seventh. 6.1 IP, 8 H, 5 ER, 1 BB, 2 K's, 86 pitches, 58 strikes, 6 groundouts, 10 flyouts....Sean Burnett gives up a one-out walk to Allen Craig before retiring the final batter in the seventh and gives up a leadoff single before a lineout to left by Jon Jay and a DP grounder by Pedro Feliz get the Nats' into the bottom of the eighth with the lead.

1. What is Nyjer Morgan doing?: Adam Dunn walks on 4 pitches from former Nats' closer Mike MacDougal. Morse singles to send Dunn's pinch runner Justin Maxwell around to third. Pudge collects hit no. 2802, an RBI single to right. 9-5 Nats. Nyjer Morgan reaches safely on a bunt attempt when MacDougal throws high to first. Bases loaded. Willie Harris doubles to right to clear the bas--What? Nyjer Morgan makes his way around from first, and makes contact with Cards' catcher Bryan Anderson as he crosses, but misses the plate. Pudge physically stops him and guides him back to home, but you're not allowed to do that. Morgan's out. And he wants an explanation. 11-5 Nats instead of 12-5. Adam Kennedy's single scores Harris, 12-5 now. And 14-5 when Roger Bernadina's 10th HR sails over the out-of-town scoreboard. The 14 runs are the highest run-total the Nats have collected since returning to DC in 2005. And it's the Nats' 100th win at Nationals Park. 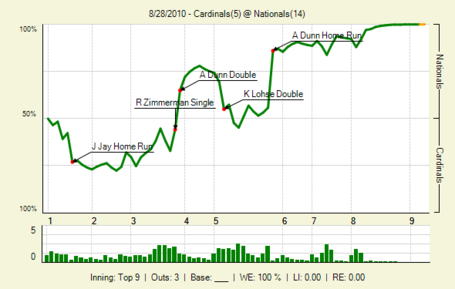