5. Roger Bernadina Wants To Play: Nats' center fielder Roger Bernadina hits a two-out ground-rule double to center off Cards' starter Adam Wainwright in the first, his 16th double of the season to along with 10 HR's, two in this series. The Nats' outfielder goes 2 for 4 Sunday, leaving him 7 for 19 with a double, 2 HR's and 4 RBI's in the four-game series with St. Louis. Berndina gets the start in center with Nyjer Morgan sitting. Dave Nichols from the Nats News Network reported on Nats' Skipper Jim Riggleman's decision to sit Morgan in an article this morning entitled, "If Nyjer was playing today, he’d get hit.", which is a must-read for Nats fans. What the future holds for Morgan and Bernadina could be one of the big stories of September and the offseason...Bernadina's been making it clear he wants to play, not sure what Morgan's thinking these days....

4. Shift Costs The Cards?: Brendan Ryan is deep on the grass, closer to second than short in the shift with Adam Dunn at the plate, but the Dunn0r goes "oppo-boppo" like Bryce Harper says, (talking like Bryce is teh kulest) with a sharp grounder the St. Louis' shortstop can't get his glove on. Ryan makes a late throw, but the speedy Dunn beats it to first for an infield single. Michael Morse fights off a 93mph sinker inside for a soft fly to right that falls in in front of Cards' right fielder Skip Schumaker. Wainwright gets Willie Harris looking with a full-count fastball and Wil Nieves K's swinging over a 2-2 curve, leaving it up to Lannan. The Nats' starter takes a full-count sinker outside and slices it to the opposite field (Oppo-Boppo!!) for a two-out RBI sing--it gets by Cards' LFer Matt Holliday and two runs score. Lannan in at second with the the Nats up 2-0.

3. "Who's the leader of the club that's made for you and me?" - souldrummer: Adam Wainwright walks Adam Dunn when he misses with a 3-1 pitch low and away and it ends up being a big mistake. The first pitch he throws to Michael Morse is a curve and Morse sends it soaring out to left and over the wall for a two-out, two-run HR and a 4-0 Nationals' lead. Morse connects on his second hit today and seventh in his last seven AB's. (According to @MASNBen that's one away from the club record...I checked the Nats' Media Guide and the club record's held by Andre Dawson, who hit in 8-straight from June 4-7th 1983 and Dmitri Young who collected 8 hits in 8 AB's from May 31st-June 1st 2007. Morse flies out to center in his next AB, however, to fall one hit short of the record...)

2. Lannan vs Wainwright A Mismatch!!!: The Cardinals finally get on the board in the seventh when Nats' lefty John Lannan gives up a leadoff double to Matt Holliday, who bounces one off the out-of-town scoreboard. A groundout by Pedro Feliz moves Holliday to third and he scores as Adam Dunn dives on a sharp grounder from Jon Jay, but Lannan gets out of the inning without any further damage and even comes back out for the eighth...Lannan Recap: Lannan lets two on with one out in the first before popping up Matt Holliday and striking out Pedro Feliz, and gives up a one-out single in the second before a 5-4-3 DP. After a 1-2-3 third, Lannan gets an inning-ending DP from Jon Jay after back-to-back one-out singles in the fourth. The Cards go down in order in the fifth and sixth and Lannan escapes the seventh after allowing a run as described above. The Nats' left-hander gets the first two outs of the eighth before a two-out single ends his day. • Lannan's Line: 7.2 IP, 8 H, 1 ER, 0 BB, 4 K's, 93 pitches, 67 strikes, 13 groundouts, 4 flyouts. (ed. note - "Classic Lannan!!")

1. Lannan To Storen: The DC Closer Tradition Continues: There's a new closer in town, and Drew Storen's handed the ball in the eighth today and asked to complete a 4-out save. Storen vs Albert Pujols: 84mph slider high and inside; 1-0. 83mph slider over the top for a called strike; 1-1. 85mph slider for a high strike over the middle; 1-2. 85mph in the dirt, tries to get Pujols to chase; 2-2. And STRIKE THREE with an 86mph slider in the dirt that the Cards' slugger does chase!! 4-1 Nats after eight. There's a little drama in the ninth when Storen loses a fastball that goes behind Matt Holliday. The Cards' left fielder takes a few steps toward the mound and the Cards' Manager Tony La Russa comes out to demand Storen be tossed. Warnings issued. Storen gets a groundout from Holliday, one down, but gives up solo HR to Pedro Feliz, 4-2 Nats. Swinging K from Jon Jay on a slider inside and low, TWO!!! And a grounder to short by Yadier Molina for out nu---Ian Desmond comes up empty. 29th on the year for Desmond, E: 102 on the year for the Nats. 2-2 slider to Colby Rasmus, sit down Colby!! THREE!!! Storen with the swinging K for save no.3 of his career!! Nats take three of four from St. Louis, winning the first series with the Cardinals since August 3-5, 2007.

0. Nats re-up Livan Hernandez for the 2011 season!!!!: In a post game announcement, DC GM Mike Rizzo reported that the Washington Nationals had a agreed on an extension to keep Livan Hernandez in the nation's capital next season. Well done, Mr. National!! Here's the official announcement from the Nats on Twitter:

• @NatsTownNews: "#Nats GM Mike Rizzo announced the signing of RHP Livan Hernandez to an extension through the 2011 season. 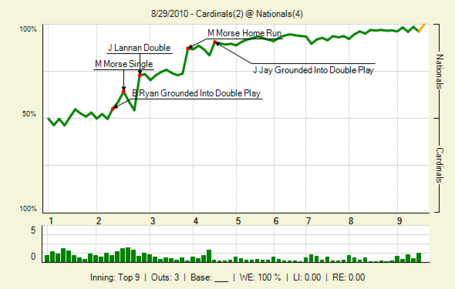