5. 3 Hours Later: Just about three hours after the game was schedule to start, the Washington Nationals and Florida Marlins got underway in front of a crowd estimated (no joke) at around 300-400. At 10:02 pm EST, Adam Kennedy sent a foul pop down the line in left that Marlins' LF Logan Morrison couldn't get to. He couldn't stop either. The Marlins' young outfielder slid several feet on his back after falling. Kennedy ended up popping out to second in what was a 1-2-3 first for the Florida starter Alex Sanabia, but every pop and fly is bound to be an adventure with standing water in every part of the outfield. The infield, however, is immaculate, covered as it was, long before the rain began to fall.

3. "It Knocks Out A Bank Of Lights Up There Like The Natural!'" Florida announcer on Zim's HR...

Washington ties it at 1-1 in the when Ryan Zimmerman hits a leadoff single and scores on Adam Dunn's 33rd double. 1-1 after two. In the third, Alberto Gonzalez singles and Roger Bernadina reaches on a bunt single that he beats to first by a mile. Two on, one out for Ryan Zimmerma---THE KIDS CALL HIM ZIM!! THE KIDS CALL HIM ZIM!!! Marlins' right-hander Alex Sanabia gives up an absolute blast to left that hits the facade in front of the upper deck and actually breaks the M in (what is now) the "Sun Life Stadiu" sign in left field. Marlins' announcers guesstimate it at 450ft+. Unreal find the highlight. Zim's 25th makes it 4-1 Nats...

2. Marquis Tests Himself: Twice in five innings, Jason Marquis puts two runners on in front of Hanley Ramirez. After surrendering a first inning HR to Hanley, Marquis gives up a two-out single to Emilio Bonifacio and a two-out walk to Logan Morrison to get to Ramirez up with two on. Marquis puts Ramirez on, issuing back-to-back two-out walks. Gaby Sanchez flies out to strand three, Still 4-1 Nats after three. In the fifth, Marquis pops Ramirez up to left where Roger Bernadina makes the catch for the second out of the frame. Gaby Sanchez flies out to Nyjer Morgan in center stranding two in the fifth. A two-out double in the sixth by Cameron Maybin's quickly followed by a two-out, two-run HR to left by Marlins' catcher Brett Hayes, whose 2nd HR of the year makes it 4-3 and ends Marquis' night after 5.2 IP, 7 H, 3 ER, 3 BB, 1 K, 2 HR's, 92 pitches, 52 strikes.

• Miss The Game? The DC Faithful Were Watching...And Really Funny... 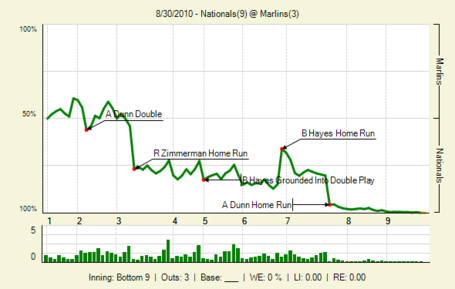