Washington Nationals Lose 1-0 To Florida Marlins In 10, But Jordan Zimmermann's The Story Until...

Share All sharing options for: Washington Nationals Lose 1-0 To Florida Marlins In 10, But Jordan Zimmermann's The Story Until...

5. Don't Run On Bernie!!!: Nats' right-hander Jordan Zimmermann needs just nine pitches to get through a scoreless first, but the second inning seems like it might take a little longer after Fish first baseman Gaby Sanchez starts the bottom of the frame with a double to the right-center gap out of Michael Morse's reach. Marlins' third baseman Chad Tracy flies to left center, and Sanchez decides to test Roger Bernadina's arm. Bad decision. Bernadina makes the catch and his throw beats Sanchez to third. Ryan Zimmerman applies the tag. Done. Double play the hard way, 7-5 DP, two down in the second. DON'T RUN ON BERNIE!!! How could you not know that by now, Gaby Sanchez? (According to @NatsTownNews on Twitter, that's Bernadina's 8th OF assist, good for 4th in the NL.) Zimmermann gets a groundout from Mike Stanton and the Nats' right-hander's through two scoreless and six Marlins.

4. 5-Straight K's!!: Fish center fielder Cameron Maybin grounds to first and almost beats the toss from Adam Dunn to the covering pitcher after the Nats' first baseman bobbles the ball, but Jordan Zimmermann gets over to cover, and decides he's tired of having to run off the mound, so he strikes out the next five batters he faces. Marlins' catcher Brett Hayes K's swinging and the opposing pitcher goes down looking to end the third. Emilio Bonifacio, Logan Morrison and Hanley Ramirez. K, K, and K.!! Looking, swinging and a foul tip into Nats' catcher Pudge Rodriguez's mitt. 5-straight K's for the Nats' 24-year-old right-hander, who adds another K for the final out of the fifth. That's 1 H, 0 ER, 0 BB, 7 K's through 5.0 scoreless in Zimmermann's second start in the majors after working his way back from Tommy John surgery last August.

With 7 K's through 5.0 scoreless and an inning/pitch limit having just come off a long rehab, Jordan Zimmermann needed just one more strikeout to tie his career high in what has admittedly been limited time in the majors. Zimmermann gets a fly ball to center from Cameron Maybin to start the sixth. Brett Hayes K's looking!!! Career high K total tied for the Nats' 24-year-old right-hander!!  (+1000 points) The opposing pitcher goes down too, swinging, 9 K's for Zimmermann!!! New Career High!! (+5000 points) If not for Marlins' starter Anibal Sanchez's 7.0 IP, 3 H, 0 ER, 1 BB and 7 K's, it would've been a (near-) perfect day for the Zimmermann, who goes 6.0, allows 1 hit, 0 ER, 0 BB and collects 9 K's, throwing 86 pitches 55 for strikes and facing the minimum 18 batters...

2. Nyjer Morgan Does It Wrong: No score after nine, and the Nats' much-maligned center fielder Nyjer Morgan takes a one-out walk from Marlins' right-hander Clay Hensley in the top of the tenth. A wild pitch from Hensley moves Morgan to second and Alberto Gonzalez takes the second-straight walk. Adam Kennedy grounds into a force at second, but they're not going to get Kennedy at first, Marlins' shortstop Hanley Ramirez is throwing home cause Morgan's going for it. The throw beats Morgan to the plate, Marlins' catcher Brett Hayes............gets crushed. Morgan lowers the BOOM on the Fish backstop but he holds onto the ball. Morgan walks back and steps on home just in case. Hayes is not getting up. Double play to end the Nats' tenth.

1. Hanley Ramirez Does It Right: Rookie closer Drew Storen takes the mound in the Marlins' tenth. Two pitches, a fastball and a sinker both at 93 and outside to get a groundout from Logan Morrison. One down. Hanley Ramirez rips a single back up the middle and takes second on Storen a little too easily. Pudge is out for a talk. A one-out walk, and only in baseball, grounder through short by Chad Tracy, Roger Bernadina wants outfield assist no.9 and he charges and comes up throwing toward home. Pudge catches it, Ramirez slides and his foot crosses home as Pudge tags his chest. Safe, even though Pudge can't believe it.

• Miss The Game? Then You Don't Know What Jordan Zimmermann's K Icon Is? Get In There...I Mean, The DC Faithful Were Watching... 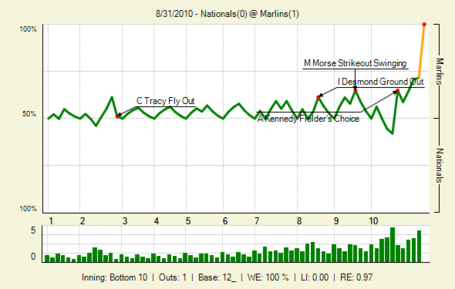